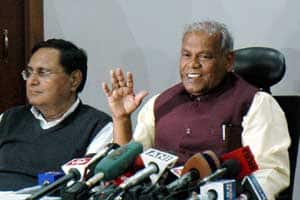 A defiant Bihar Chief Minister Jitan Ram Manjhi was expelled by Janata Dal United (JDU) which accused him of “indiscipline” and demanded that Governor Kesri Nath Tripathi ask him to take a trial of strength in the Assembly within 48 hours.

Party President Sharad Yadav ordered Manjhi’s expulsion for “indulging in anti-party activities” ahead of Nitish Kumar’s meeting with the Governor to stake claim to form government.

“Party President Sharad Yadav has expelled Manjhi from primary membership of JD(U) for indiscipline. Article 3 of the JD(U) Constitution gives this special power to the party President under which he can appoint or expel anybody,” party general secretary K C Tyagi said at a press conference in Delhi.

Calling Manjhi a “betrayer”, Yadav said that he had left no other option.

“When the history of betrayal will be written, Manjhi’s name will be the first in it. He went to the extent of criticising the decision of party president and said that the latter had no power to call the meeting of the legislature party.

“He made comments that amounted to gross indiscipline against the party president. There was no way left other than to expel him from the party,” Tyagi said releasing the expulsion letter.

Responding to questions, Tyagi said that Manjhi is now “neither a leader of the JD(U) legislative party nor a member of the party.”

Accusing the BJP of trying to create a “constitutional crisis” in Bihar, Tyagi said the JD(U) “requests the Bihar Governor to hold a trial of strength in the state Assembly within 48 hours.”

Manjhi was part of Nitish Kumar government in 2005 as well as in 2010 before taking the mantle from him on May 19 last year after Kumar had resigned following a crushing defeat to his party by Narendra Modi-led BJP in Lok Sabha polls.

Manjhi, who has rebelled and is all prepared for a final showdown with mentor Nitish Kumar, has arrived in Patna from New Delhi, where he had Prime Minister Narendra Modi.

The power struggle in Bihar JD(U) escalated as Manjhi ruled out his resignation before a trial of strength in the Assembly.

JD(U) yesterday submitted letters of support from the RJD, Congress, CPI and an independent MLA to the Governor claiming that Nitish had the backing of 130 MLAs in a 243-member House.

BJP also said that the majority has to be proved on the floor of the Assembly and not in any party’s office as it accused Nitish of being “hungry for power”.

“We haven’t taken any decision yet but we are sure that Jitan Ram Manjhi who is the Chief Minister, according to his statements, is very confident and Nitish Numar’s pavilion looks very disappointed,” BJP Spokesperson Shahnawaz Hussain said.

Tyagi alleged that the “language” Manjhi was speaking after meeting Modi yesterday was “scripted” at the Prime Minister’s residence.

He also said the “character assassination” campaign against JD(U) leaders was a handiwork of the “BJP headquarters”.

He rejected suggestions that removing Manjhi was an “anti-Dalit” move. “When Kiran Bedi was replaced by Harsh Vardhan, was it a move against the Vaish community,” he quipped.

He said the JD(U)’s constitution authorises the party president to take any emergency decision, but it has to be ratified by the JD(U) National Executive within a month. He said constitutions of BJP, Congress and even AAP give similar powers to their party presidents.

Tyagi said Bihar Governor should either ask Manjhi to prove his majority in 48 hours or appoint Nitish Kumar the next CM and give him an opportunity to prove his strength on the floor of the legislative assembly in the same period.

He hoped that the Governor would follow all constitutional norms while taking a decision on the issue.