Under the Saudi Vision 2030, the Al-Saud leadership has introduced mega-economic projects in preparation for a post-oil economy. The focus is on developing Saudi Arabia as a major business, financial and transportation hub. 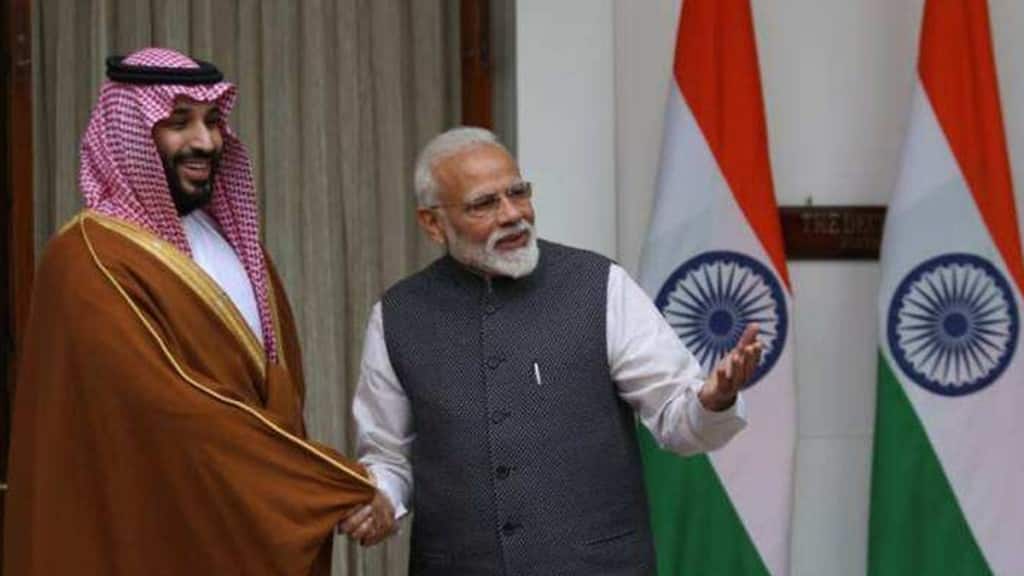 The proximity between New Delhi and Riyadh in terms of diplomatic friendship, political understanding and breakthroughs in security, defence and military cooperation are unprecedented. (Courtesy Express Photo: Prem Nath Pandey)

Saudi Arabia made history on the football field at FIFA World Cup 2022 in Qatar by defeating a star-studded Argentina led by none other than Lionel Messi – one of the modern-day football GOATs. The feat by the Green Falcons–as the Saudi football team is known–on 22 November by some analysis was one of the biggest upsets in the history of FIFA World Cups. The euphoria it generated can be fathomed from the fact that November 23 was declared a holiday to celebrate the victory. Arabic social media and Arab streets from Morocco to Oman exploded in jubilations. For the Saudi football team, this was their moment in the sun and could be the beginning of a new era in the history of the sport in the Kingdom.

Besides the euphoria and the limelight, the victory of the Falcons is also symbolic of the transformation going on in the country at the social, economic and cultural levels. Under the Crown Prince and Prime Minister Mohammed bin Salman, the Kingdom has witnessed an extraordinary transformation at an unprecedented pace. This is visible in all domains from religious expressions to social representations and from education to sports, there is a palpable change. Be it the issue of restrictions on women, such as driving or travelling without a male chaperone or performing Hajj and Umrah alone, or bringing world-class recreational avenues to the Kingdom, systemic changes are being introduced in a grade manner shaping a new future for Saudis.

The changes are visible in the economic domain as well. Under the Saudi Vision 2030, the Al-Saud leadership has introduced mega-economic projects in preparation for a post-oil economy. The focus is on developing Saudi Arabia as a major business, financial, and transportation hub by creating infrastructure, improving business environment, cutting down on bureaucratic red tapes, reducing corruption and creating a conducive environment for international corporations to thrive. Saudi Arabia plans to emerge as a transnational and regional hub in shipping and transportation and developing its ports and roads infrastructure and improving connectivity with neighboring countries.

Efforts are also on to getting international corporations to bring the headquarters of their MENA businesses to Riyadh and invite globally celebrated businessmen and managers to come to Saudi Arabia and help improve its business climate.The six Future Investment Initiative conferences organized in Riyadh – nicknamed Davos in the Desert – are an effort in that direction. Another key initiative is the Vision 2030 launched in 2016 that plans to prepare the Kingdom for a post-oil future.

Vision 2030 has prioritised developing newer economic sectors such as mining, leisure and archaeological tourism, sports and entertainment, arts and fashion and last but not the least music, games and recreation. There are also efforts to promote startups in Information Technology (IT), media, retail, and transportation and bringing investments in capacity building in emerging areas including Cybersecurity, Artificial Intelligence (AI), robotics and machine learning.

Vision 2030 is a response to the multi-dimensional challenge Saudi Arabia was facing over the years due to the combination of demographic change, economic stagnation, social restrictions and rapid globalisation. The leadership of the Kingdom recognized that in an uncertain socio-political and economic environment, especially in the wake of the Arab Spring, Saudi Arabia will have to bring rapid socio-economic reforms to remain stable and preempt any possibility of protests and instability. Consequently, King Salman and Crown Prince Mohammed focused on social opening and economic progress as key areas for reforms, and the results have begun to show. The victory on the football field thus symbolizes the direction in which the country is heading.

Like the rapid transformation inside the Kingdom, Indo-Saudi relations have gained an extraordinary momentum in recent years. The proximity between New Delhi and Riyadh in terms of diplomatic friendship, political understanding and breakthroughs in security, defense and military cooperation are unprecedented. Undoubtedly, they are likely to grow further, but it is the economic interactions that have provided the strong base for flourishing of ties and it is in this domain that there are extraordinary scopes for strengthening relations.

Conventionally, Indo-Saudi economic ties have been based on the three pillars of energy, expatriates and trade. While they continue to grow, the astonishing internal socio-economic transformations are creating newer opportunities for Indian businesses, entrepreneurs and industries in multiple sectors.

One of the key areas where there are immense possibilities is films and cinema. Saudi Arabia, until recently, had no film industry and public screening of films was banned. This has changed rapidly with the country now having more than 50 theatres and close to 500 screens across 20 cities. By 2030, the Kingdom plans to give licenses to at least 300 theatres. Hollywood movies are quite popular and have opened to full houses. There are also efforts to bring more international productions to shoot in Saudi locales as well as promote an indigenous film industry.

With India, there are already talks of collaboration between Bollywood and the Saudi film industry. Since its launch in 2019, the Red Sea International Film Festival in Jeddah has featured Bollywood films and stars prominently. In April 2022, Saudi Culture Minister and Chairman of the Saudi Film Commission Prince Badr Al-Saud visited India and met with several producers, directors and actors to explore possibilities for cooperation and harness their expertise to strengthen the nascent Saudi film industry. The potentials for cooperation are immense given that India has a vast film industry with a unique local and global outlook. This gives Indian producers, directors, actors, technicians, distributors, and theatre owners a unique perspective to explore the Saudi market. Given that the Kingdom has a large South Asian expatriate community of nearly 6 million, there is no dearth of an audience even for Indian films.

Besides, there is potential for collaboration in other emerging sectors including music and dance festivals, sports, games and animation industry, fashion and merchandise, leisure and archaeological tourism and mining, shipping and transportation. Saudi Arabia has made grandeur plans for leisure and archaeological tourism. The Kingdom has numerous sites of breathtaking beauty in the north, south and western regions with beautiful unexplored beaches, mountains and ancient archaeological sites, not to mention the immense potential for desert safari. These have mostly remained unexplored due to the restrictive cultural conditions in the past. With the change in approach, tourism is fast emerging as a major sector for potential growth. Saudi Arabia is also spending on the so-called vanity projects, such as NEOM and The Line, to showcase its potential and make a mark on the global stage. These are creating unexplored potential for Indian entrepreneurs and businesses to participate in different economic sectors both in terms of developing them and bringing trained human resources.

Indian businesses can take advantage of its skilled and experienced human resources in varying fields to expand their presence in the Saudi market. Be it in the domain of animation, online gaming and sports or fashion, merchandise and retail or in organizing music and dance festivals, Indians have experience in both domestic and international markets and this gives them an advantage over others aggressively working to harness the potentials in the Saudi market.

Indian companies are already involved in sectors such as infrastructure development, engineering and services, transportation and shipping but given the grandeur plans for expansion of these sectors, the opportunities are multiplying. Mining and shipping sectors in this regard have extraordinary potentials that can be targeted by Indian entrepreneurs and businesses.Moreover, the improved political and diplomatic relations and growing strategic ties, and the familiarity of Saudis with India and South Asia gives Indians a unique advantage.

For decades Indo-Saudi ties remained transactional rooted in energy imports and exports of manufactured and agricultural products and human resources. The simultaneous transformations of bilateral ties, encompassing political, economic and security cooperation and alignment of peace, development and prosperity-oriented world views, and the humongous socio-economic transition inside the Kingdom are creating newer opportunities to take the relationship to a new level. The sky is the limit when it comes to the potentials and it is high time for the trade and industry czars in India to take note and act.

The author is a Fellow at Manohar Parrikar Institute for Defence Studies & Analyses, New Delhi.