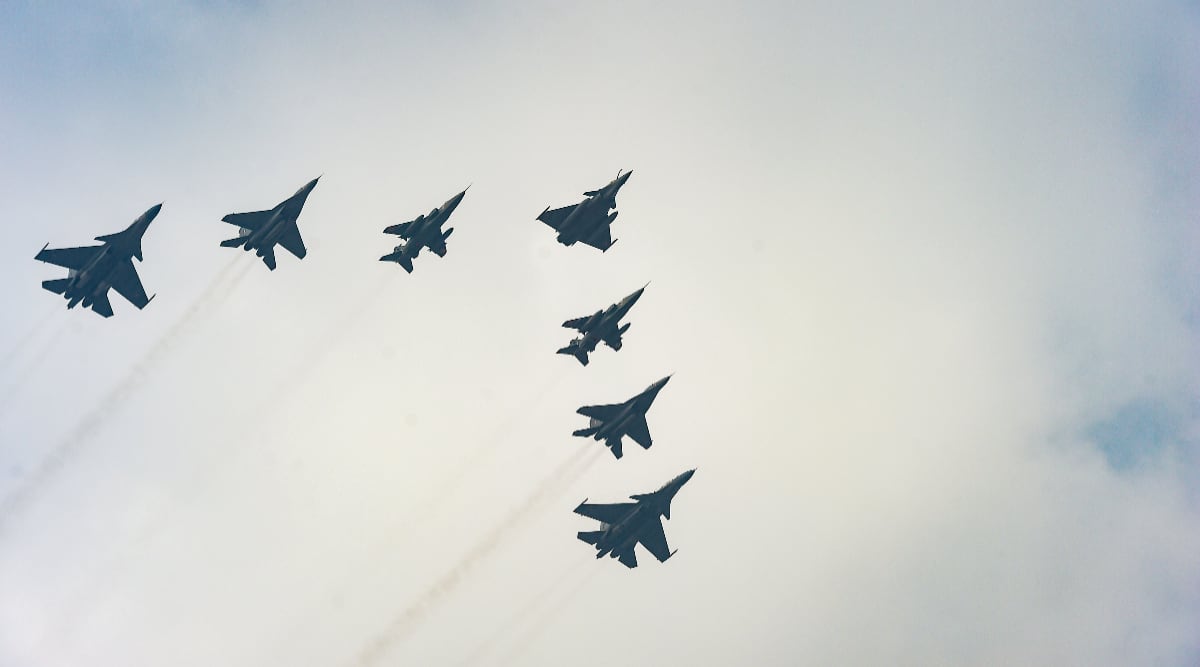 India Republic Day 2022 Parade Highlights: India is celebrating the 73rd republic Day today. Never-seen-before cockpit visuals, special invites to construction workers, other frontline staff and gigantic scrolls adorning the Rajpath, this year’s Republic Day parade was a unique celebration of both old and new. The parade started at a new time slot of 10:30am. The official statement by the Ministry of Defence said that the opening timing was tweaked to give ‘better visibility’ of both parade and the flypast. In a departure from the usual tradition of the Prime Minister visiting the Amar Jawan Jyoti, this year PM Narendra Modi visited the National War Memorial to pay his tributes to the valour of fallen soldiers. Later, PM Narendra Modi reached Rajpath to welcome President Ram Nath Kovid and First Lady Savita Kovind. Due to the ongoing pandemic, there was no special guest for the parade and no foreign contingent participated in the parade.

The quota of general public attending the Republic Day parade was also reduced to up to 8,000, the officials say. While the usual military marching contingents of all three forces were present, the theme of ‘Amrit Mahotsav’ was prominent on Rajpath. For example, the contingent of Jammu and Kashmir Light Infantry was seen in the 1971 uniform. The army contingents also showcased the consistent changes in the military uniforms over the years.

As many as 12 states and government departments presented their tableaus during the Republic Day parade. While the Uttar Pradesh tableau showcased the Kashi Vishwanath corridor, the Punjab display had life-size replica of martyrs Bhagat Singh, Udham Singh and Lala Lajpat Rai.

In place of various school groups performing dance programmes, this year saw a special show by 480 dancers that were selected from around 15 states.

But it was the grandest ever flypast of 75 Indian Air Force aircraft that stole the show during the finale of the Republic Day parade. All eyes looking up to catch a glimpse of Jaguars, Chinook and MiG29K. For the viewers watching on their screens on TVs and laptops, the national broadcaster Doordarshan had a special treat. There were never-seen-before cockpit visuals that looked straight out of a Hollywood action movie!

Here are the key highlights of the Republic Day parade 2022:

The grand finale and the most keenly awaited segment of the parade, the Fly Past, for the first time, witnessed 75 aircraft/helicopters of the Indian Air Force displaying a number of formations, as part of ‘Azadi ka Amrit Mahotsav’. Vintage as well as current modern aircraft/helicopters like Rafale, Sukhoi, Jaguar, Mi-17, Sarang, Apache and Dakota will display different formations, including Rahat, Meghna, Eklavya, Trishul, Tiranga, Vijay and Amrit.

For the first time, dancers who perform during the cultural programme at the parade have been selected through a nation-wide competition ‘Vande Bharatam’, jointly organised by Ministries of Defence and Culture. The competition that began at the district level with the participation of nearly 3,870 dancers in 323 groups progressed to state and zonal levels over a period of two months in November and December. Finally, 480 dancers were selected. They will showcase their talent during the parade at Rajpath.

The poll-bound Uttar Pradesh's tableau was all about the just inaugurated Kashi Vishwanath Dham. The song played was about a 'increasing brotherhood' in the state.

The state shows the rural life in its all beauty. Union Minister Smriti Irani was seen cheering the Chhattisgarh jhaanki.

The tableau of Jammu and Kashmir shows the changing phases of the state. There is a huge replica of the Vaishno Devi dhaam

This year, tableaux of 12 States/Union Territories and nine Ministries/Departments, which have been prepared on various themes under ‘Azadi ka Amrit Mahotsav’ are being seen on Rajpath.

The Indian Coast Guard (ICG) contingent was be led by Deputy Commandant H T Manjunath. ‘Ready, Relevant and Responsive’, the ICG, in January 2021, undertook a major fire-fighting operation ‘Sagar Aaraksha-II’ in foreign waters, to douse a major fire onboard MV X-press Pearl off Sri Lanka. The ICG ships and aircraft relentlessly fought the fire for more than 150 hours & doused it successfully to avert a major ecological disaster in the region. The motto of the ICG is ‘Vayam Rakshamah’ meaning ‘We Protect’.

The Indian Air Force contingent comprised of 96 airmen and four officers and will be led by Squadron Leader Prashant Swamyanathan. The Air Force tableau is titled ‘Indian Air Force, Transforming for the Future’. The tableau showcases scaled down models of MiG-21, Gnat, Light Combat Helicopter and Rafale aircraft, as well as the Aslesha radar.

The Naval contingent comprised of 96 young sailors & four officers led by Lt Cdr Aanchal Sharma as Contingent Commander. It was followed by the Naval Tableau which is designed with the aim to showcase the multi-dimensional capabilities of the Indian Navy and highlight the key inductions under 'Aatmanirbhar Bharat'. The ongoing 'Azadi Ka Amrit Mahotsav' also finds a special mention in the tableau.

Major Mrityunjay Singh Chouhan led the first contingent in Uniform. The 61 Cavalry is the only active serving horse cavalry regiment in the world. In today's parade, the Indian Army was represented by a Mounted Coolum of 61 Cavalry, 14 Mechanised Columns, six marching contingents and chopper of Army Aviation

President Ram Nath Kovind, Prime Minister Narendra Modi, Defence Minister Rajnath Singh are among several leaders who have wished the nation on its 73rd Republic Day. PM Modi, who has a formidable Twitter presence, posted his message: “Wishing you all a happy Republic Day. Jai Hind!”

If you look for something on Google today, you would be greeted to a beautiful doodle celebrating the Republic Day of India. The doodle has all the motifs of the grand parade of Rajpath. It includes elements such as elephant, camel, musical instruments, tricolour and two beautiful doves depicting the peace and tranquility of the largest democracy in the world.