For the Rs 24,000-crore project, the US aerospace giant has pitched its twin seater F/A-18 Block III Super Hornet which can operate from a `ski-jump’ ramp and be an enabler for secure Indo-Pacific. 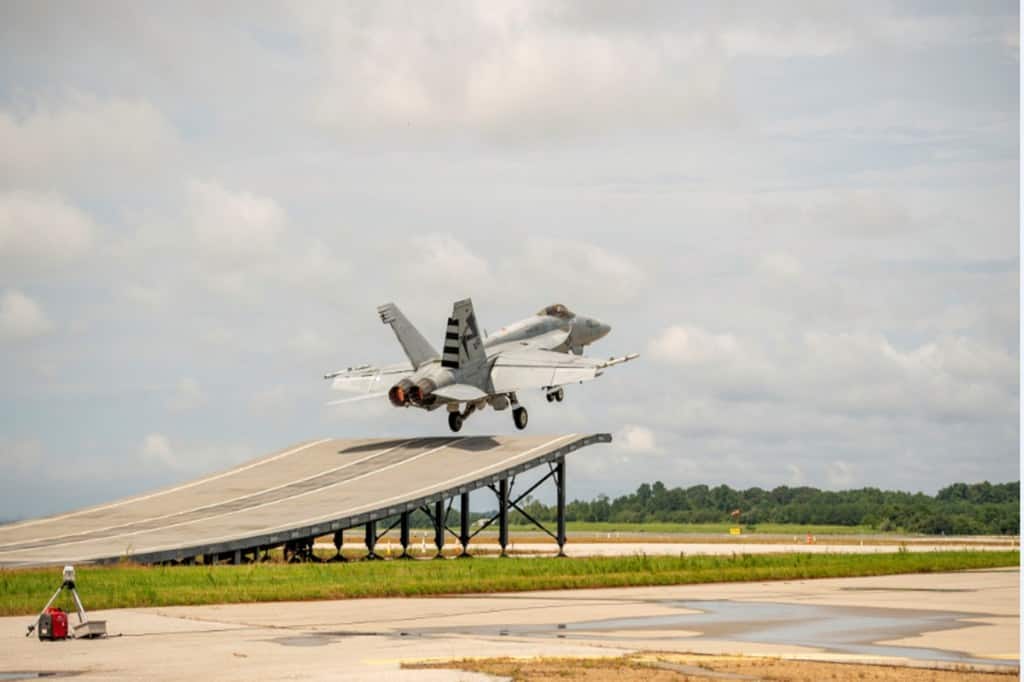 India’s first indigenous aircraft carrier (IAC), is getting ready to go for sea trials soon and is expected to be commissioned into the Eastern Naval Command in 2022 as INS Vikrant. For the Rs 24,000-crore project, the US aerospace giant has pitched its twin seater F/A-18 Block III Super Hornet which can operate from a `ski-jump’ ramp and be an enabler for secure Indo-Pacific.

“The F/A-18 Super Hornet Block III on offer to the Indian Navy (IN) is the most advanced, multi-role, frontline fighter of the US Navy (USN) and is the workhorse for the fleet, and will remain so for the foreseeable future,” says Ankur Kanaglekar, Head India Fighters Sales, Boeing Defense, Space and Security.

F18 Super Hornet Block III does not fit in elevator of new aircraft carrier design. How does Boeing propose to address this issue?

More than 150 simulation studies including the successful ski-jump test conducted in September 2020 prove that the F/A-18 can operate from INS Vikramaditya as well as from IAC-1 and will meet or exceed the Short Takeoff but Arrested Recovery (STOBAR) performance requirements of the Indian Navy.

We are the only OEM in the Multi-Role Carrier Borne Fighter (MRCBF) competition to have validated the STOBAR performance, in a ‘real-world’ environment. This shows our commitment to safety as the foremost priority. The vast amount of data generated from the ski-jump test, coupled with the past analysis conducted, makes us confident that F/A-18 Super Hornet BLK III would deliver unrivaled STOBAR performance from Indian Navy’s carriers.

Our carrier compatibility studies also takes into account a two-seater carrier compatible variant of Super Hornet that offers several unique advantages to the Indian Navy including flexibility, higher utilization of the fleet, ability to embark certain missions from the carrier that benefit from having the second crew and opportunity to develop an interface between manned & unmanned systems in a carrier environment.

Boeing/USN has deep subject matter expertise in naval aviation and integration of aircraft with the carrier. Several innovative solutions related to carrier compatibility will be offered to the Indian Navy, subject to G2G approvals, to integrate the Super Hornet with the carriers. Some of these solutions are currently being developed by our technology teams in our engineering and technology center in Bangalore.

India already has earmarked MiG29K for IAC 1. Why will it need to acquire western aircraft?

Over last many years, Boeing teams were working closely with IN to analyze the overall compatibility of F/A-18 Super Hornet Block III with Indian Navy’s current and future carriers. These complex studies involved STOBAR performance, arrested landings, aircraft spotting on the carrier deck and most importantly the fitment of the aircraft in the carrier lift and hangars. F/A-18 Super Hornet, with its wing-fold (i.e. the wings of Super Hornet fold) feature, offer a ‘tried and tested’, safe & practical solution for compatibility with the navy carriers.

You have mentioned Networked Synergies. Please share more about that.

F/A-18 Super Hornet Block III is a highly networked fighter. Today Indian Navy has 10 (plus 2) P-8Is in service, with an additional six to be procured. IN will be inducting other ‘US-Origin’ helicopters and unmanned systems. Super Hornet Block III on offer to the Indian Navy will come with advanced network architecture that will provide opportunities to interface seamlessly with other US origin assets including Indian Navy’s P-8Is. Thus F/A-18 Super Hornet will act as a ‘Force Multiplier’ for the Indian Navy as it will significantly increase the type of missions.

Two Seater Variant and how will it be of value to the Indian Navy?

Boeing is offering F/A-18 Super Hornet in single seater (E-Variant) and two seater variant (F-Variant) to the Indian Navy. Both variants are carrier compatible to perform the full range of the combat mission.

Both single and two seater variants can fully operate from the carrier deck. The two seater is highly capable trainer aircraft (both ashore and carrier borne). This will offer IN flexibility and ensure that Indian Navy’s precious air assets are never underutilized.

The two seater carrier compatible variant, will allow Indian Navy to fly advanced mission from carrier that benefit from having the second crew on board.

Carrier based naval aviation technologies related to Manned-Unmanned interface can also be effectively operationalized through a two-seater version.

You are in competition with the French Rafale which is being flown by the Indian Air Force. The French have offered the naval version. What are your views on this?

The F/A-18 Super Hornet offers value proposition based on superior economics that would be appreciated in the current environment, as it not only has a low acquisition cost, but also costs less per flight hour to operate than any other tactical aircraft in US forces inventory.

This is possible because the fighter is designed for ease of maintainability and offers impressive durability. For example: The life of the airframe is 10,000 hrs. This means that it has long life built-in for future upgrades and enhancements. Depending on Indian Navy’s requirements, our ‘By India – For India’ sustainment program that is built on other successful sustainment programs that Boeing is executing for the Indian Air Force and Indian Navy today, will develop select capabilities in India to sustain F/A-18 Super Hornet

F/A-18 Block III Super Hornet is powered by the GE F-414 engine that has clocked cumulatively more than 5 million hours. The same family of engine is powering India’s indigenous Light Combat Aircraft (LCA) that has already been inducted by the Indian Air Force. The commonality in engines would create scale efficiencies for potential sustainment opportunities in the future.

Super Hornet will also offer India Navy the most economical path to get access to newer technologies compared to any other competitor. Due to the massive scale of the Super Hornets and Hornets, the cost of incorporating newly developed advanced technologies will be very competitive.

There are reports indicating that the USN is buying latest technology – the F 35 and is in process of phasing out the F-18s. Then why should India buy the 4th generation old technology?

By 2021, the US Navy would have more than 700 F/A-18 Super Hornet and Growler variants in service. Induction of the Super Hornet by the Indian Navy would greatly enhance the interoperability between Navies with its obvious operational connotations. The F/A-18 Super Hornet further has the potential to create collaboration opportunities between the two navies for carrier integration, training, technology transfer, etc.

Enabler for secure Indo-Pacific: Three (India, Australia, the US) out of the four democratic countries that support a secure Indo-Pacific operate P-8 aircraft. Two out of four (US & Australia), operate F/A-18 aircraft. The Indian Navy’s F/A-18 Super Hornets will act as ‘Force Multipliers’ as they interface with Indian Navy’s P-8s and those of other friendly countries, subject to requisite Government approvals.