This export season has been good for mango growers in Maharashtra, senior officials of the Maharashtra State Marketing Board (MSAMB) said. 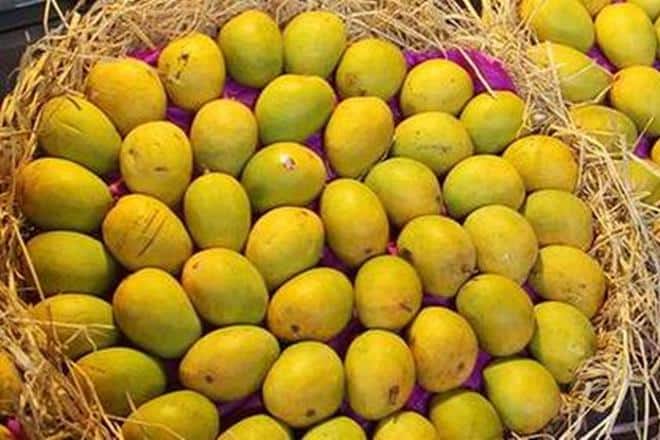 The export of mango to the US market has more than doubled this time from last year at 350 tonne as compared to 54 tonne the previous year.

This export season has been good for mango growers in Maharashtra, senior officials of the Maharashtra State Marketing Board (MSAMB) said. The export of mango to the US market has more than doubled this time from last year at 350 tonne as compared to 54 tonne the previous year. While the first consignment of the season of around 4 tonne has left for the Australian market from Lasalgaon Irradiation Centre in Nashik, officials at MSAMB revealed that more than 7-8 consignments have already left for Australia from other locations. Exports to Japan, Korea and New Zealand have also been on the rise at 12 tonne, 4 tonne and 20 tonne, respectively.

Earlier, India could not export mangoes to Australia until now due to tough phyto-sanitary conditions that require irradiation treatment and inspection prior to the shipment. A delegation had visited a radiation plant in Maharashtra a couple of years ago and the Australian Biosecurity Import Conditions (Bicon) authority had recently revised its protocol to allow Indian irradiated mango. It has okayed irradiation facility centres at Vashi in Navi Mumbai and Krushak at Lasalgoan (near Nashik).

Interestingly, Agricultural and Processed Food Products Export Development Authority (Apeda) had organised a buyer meet at Mumbai for the promotion of mangoes where exporters were urged to explore new varieties of the fruit, as well as sending them via the sea route. Buyers from 18 countries were part of this meet which saw the participation of Australia, Ghana, Iran and Bahrain, among others. The official from MSAMB said that although Alphanso varieties continue to dominate, other varieties such as Kesar are also getting good response.

In April, the first consignment of Alphanso mangoes from the country had left for the US market from Vashi in Mumbai after getting approvals from American quarantine officials. The first consignment of 16 tonne has been done through KB Exports, Rambo International and Kaushal Continental. Sunil Pawar, MD, Maharashtra State Agriculture Marketing Board (MSAMB) had said around 1,500 tonne are likely to be exported to the US, 4,000 tonne to Europe, 20,000 tonne to UAE and 12,000 tonne to other nations. This means a total of 37,500 tonne will be exported from Maharashtra this season, he said. Last year, some 32,500 tonne were exported from Maharashtra, he said, adding that there is a 15% rise in exports this season.

So far, around 600 tonne have been exported from the Vashi centre to Russia, England, Italy and France. Primarily, Alphanso, Kesar, Bangnapalli variety of mangoes are being exported to overseas countries. With a good mango crop this season, alphanso exports from Maharashtra are expected to increase by 15% this year, top officials of MSAMB had said.

During the start of the season, the first consignment of some 12,000 kg of alphansos had left for Italy. South Africa is another new market that is being explored and a delegation was in India last month to explore possible opportunities. Exports to this new market are likely to commence from next season. This year, total production is expected to touch some 4 lakh tonne. Export to the US has begun and also to Australia. Japan and Korea are other markets where Indian alphansos are popular.

MSAMB officials who handle mango export said all facilities are ready for export. Around 1,500 tonne are expected to be exported to the US. All mangoes exported to the US are irradiated at BARC (Bhabha Atomic Research Centre) in Mumbai which has a capacity to handle one tonne per hour,the official said.

Maharashtra is the largest mango exporting state in the country and accounts for over 80% of the total exports. For Europe, the produce has to go through hot-water treatment. For South Korea, Pest Risk Analysis is mandatory. Mauritius has already granted market access to Indian mangoes subject to phytosanitary certification. The Marketing Board has established facilities for irradiation, hot water treatment, vapour heat treatment for export to various markets. In Maharashtra, Alphanso, better known as Hapus , starts arriving in markets of Mumbai and Pune by the end of February. Arrivals pick up by mid March and the season usually ends by May.

Europe has been one of the most important markets for the country and some 5,000 tonne were exported to the European market last season. Switzerland has also lifted the ban on Indian mangoes. New markets have also opened up in Canada, Malaysia, New Zealand, besides South Korea, North Korea and Australia. Apeda has already issued advisories for registration of mango orchards under Mangonet.

Follow us on
Latest News
No choice: Elon Musk justifies layoffs
SBI profit up 74%  at Rs 13,265 crore
Inside track by Coomi Kapoor: Deadline postponed?
Across the aisle by P Chidambaram: No apologies, no resignations
Ringside view by Tushar Bhaduri: Power hitters
Interview | We’d like to grow in line with industry: Sanjiv Chadha, BoB chief
DCB Bank Q2 net profit jumps 73% to Rs 112 crore
Photos
Dazzling & Astounding! Proposed design of the to-be redeveloped Dakaniya Talav Railway Station in Rajasthan-PHOTOS
12 hours agoNovember 5, 2022
Heart-wrenching! Here is a look at Morbi and the suspension bridge that collapsed
5 days agoOctober 31, 2022
In Pictures: PM Modi in Kargil to celebrate Diwali with soldiers, says, ‘All of you have been my family for years now’
2 weeks agoOctober 24, 2022
Read More
×
Borrowing is an intergenerational burden, says FM
STL turns positive after 3 quarters, reports net profit of Rs 44 cr in Q2
Book Review| Ambedkar: A Life – Babasaheb revisited
On the shelf: Here are some of the e-books that you may find interesting
Book Review| The Dolphin and the Shark: Stories on Entrepreneurship
Contributor to climate change! Holiday ‘hot’ spots