The state-wide protest is called by the DMK and other opposition parties. Tamil Nadu political parties have accused the BJP-led Centre of favouring Karnataka by not submitting a ‘scheme’ in the Supreme Court over distribution of Cauvery river water. 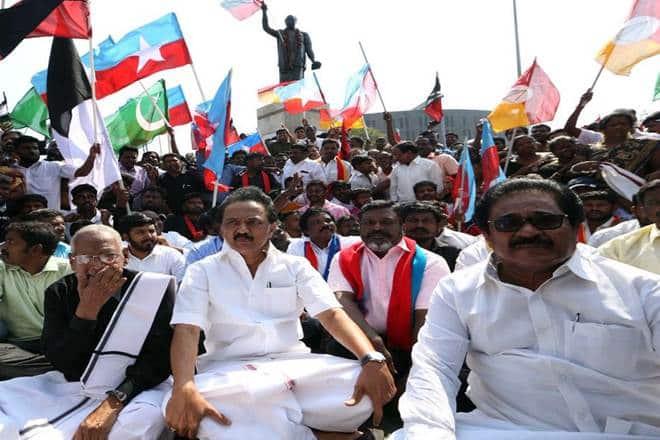 Tamil Nadu bandh LIVE Updates: Normal life in Tamil Nadu was hit on Wednesday following the call for a bandh by opposition parties against the BJP-led Centre’s refusal to set up a Cauvery Management Board (CMB) despite a Supreme Court order. Several prominent roads in different cities wore a deserted look today. Also, markets in different cities are shut to make the bandh a success.

In Chennai, DMK workers and party’s working president MK Stalin held a ‘road-roko’ protest. Also, heavy deployment of security was spotted near the DMK’s headquarters. In Coimbatore, DMK workers were seen holding rubber rats in their mouth as a part of the protest.

7.34 pm : As the day wraps up, DMK-led opposition parties’ sponsored bandh demanding setting up of the Cauvery Management Board was by and large peaceful and near total in Tamil Nadu,
barring stone-pelting incidents in some parts.

7.20 pm: The organisations were seen creating rail and road blockade, demonstrations. Also, the impromptu rallies by the Opposition marked the shutdown in the state affecting normal life to some extent.

7.05 pm: As per police, stone pelting incidents were reported from places including Chennai, Vellore, Erode and Sivaganga.

6.55 pm: The protest has got the support of a key traders body of Tamil Nadu. As a fall-out, retail outlets, grocery shops and establishments were closed in most of the places across the state, including Chennai and the Cauvery delta districts of Tiruchirappalli and Thanjavur.

6.40 pm: Meanwhile, it is reported that pro-Kannada outfits have called for a bandh in poll-bound Karnataka on April 12 in a counter to the ongoing stir in neighbouring Tamil Nadu.

5.45 pm: Earlier in the day, the DMK-led opposition parties’ bandh, demanding an early establishment of Cauvery Management Board to ensure water for farmers as per the Supreme Court orders, began in Tamil Nadu.

# The Puducherry government has moved the Supreme Court seeking specific direction be passed to the Centre to immediately implement its verdict in ‘true letter and spirit’. The Congress-ruled UT has been allocated 7 tmc water of the Cauvery river.

1 pm: In Tirunelvelli, around 150 protesters were detained for blocking a passenger train. As a result of the Tirunelvelli protest, the Chennai-bound Guruvayur Express and Trivandrum-bound Ananthapuri Express were delayed.

# Speaking to reporters, Stalin said that the strike was succesful and thaked all those who backed the DMK.

12:10 pm: DMK and other opposition parties are staging protests across the state for the past four days. In Tiruchirappalli, former minister and DMK strongman KN Nehru is leading a rally.

11:45 am: According to PTI, banks, pharmacies, hospitals and schools, however,  are open and functioning smoothly.

11:25 am: A key traders body is backing the opposition parties’ bandh. Retail outlets, grocery shops and establishments were closed in most of the places. Cauvery delta districts of Tiruchirappalli and Thanjavur are also hit by the shutdown.

11 am: Over one lakh police personnel deployed across that state. Alone in Chennai, the administration has stationed over 20,000 security staff.

10 am: DMK workers including MK Stalin gather on the arterial Anna Salai here and protested against the setting up the CMB.

9 am: Brief protests reported on the rail tracks in Salem and Tirunelvelli. In Tirunelvelli, DMK workers were seen protesting in front of a passenger train. Police, however, managed to disperse them.

# A southern railway official told IANS that suburban and long distance train services were also being operated as usual.

# News agency IANS reported that in Chennai, skeletal government buses and radio taxis were plying on the roads. Autorickshaws, however, stayed off.

8 am: Petrol pumps are operating normally. Also milk supply was not affected anywhere in the state.

7 am: In Coimbatore, DMK workers were seen holding rubber rats in their mouth to protest against the Centre.

Coimbatore: Members of DMK and Manithaneya Makkal Katchi kept rubber rats in their mouths during protest against central & state government over constitution of #CauveryManagementBoard; protesters were later detained by the city police #TamilNadu (04.04.18) pic.twitter.com/ayIAgeXX4G

Earlier on Tuesday, ruling AIADMK leaders including Chief Minister K Palanisami and his deputy O Panneerselvam had observed a day-long hunger strike against the Centre.