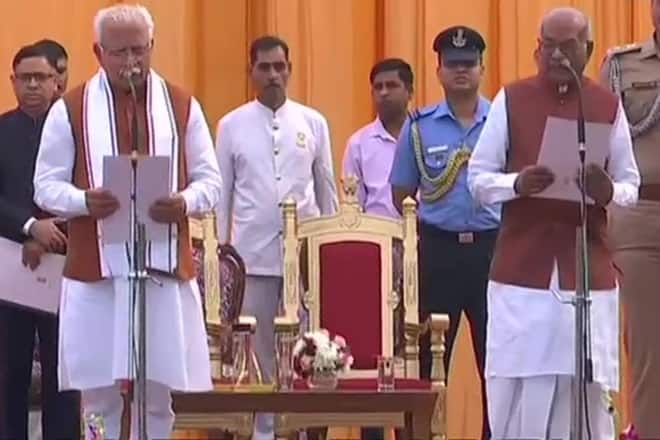 Bharatiya Janata Party (BJP) leader Manohar Lal Khattar on Sunday afternoon took oath as the Chief Minister of Haryana for a straight second term. Besides Khattar, Jannayak Janta Party (JJP) chief Dushyant Chautala also took as the Deputy Chief Minister. The swearing-in ceremony was held at Raj Bhavan in Chandigarh. Governor Satyadeo Narain Arya administered the oath of office and secrecy to Khattar and Chautala in the presence of a galaxy of leaders including former Punjab CM Parkash Singh Badal and BJP working president JP Nadda. Former CM and senior Congress leader Bhupinder Singh Hooda was also present on the occasion. On Saturday, both Khattar and Chautala met the Governor to stake claim to form government in Haryana. The Governor accepted their proposal and invited them to form the next government. Khattar also tendered his resignation which was accepted by the Governor. Seven independent MLAs were also present at the Raj Bhavan.

In the just-concluded Assembly elections, the BJP won 40 seats and was six short of a majority in the 90-member Legislative Assembly. The Congress won 31 seats, 16 more than its 2014 tally. The JJP of Dushyant Chautala which won 10 seats, announced support to the BJP. Dushyant Chautala is the grandson of Om Prakash Chautala and the great-grandson of former Deputy Prime Minister Chaudhary Devi Lal.

Congress leader Bhupinder Singh Hooda said that the BJP and JJP alliance has been forged in manner of ‘vote kisi ki, support kisi ko’. “This govt is based on selfishness. JJP disrespected people’s mandate. We had less time after changes in our org.Had the changes been made earlier, results would’ve been different,: he said.

Dushyant Chautala takes oath as the Deputy CM of Haryana

Dushyant Chautala takes oath as the Deputy Chief Minister of Haryana at the Raj Bhavan in Chandigarh. Governor Satyadeo Narain Arya administered the oath of office and secrecy to Dushyant. The JJP won 10 seats in the Assembly elections.

BJP leader Manohar Lal Khattar on Sunday took oath as the Chief Minister of Haryana for a second straight term. The swearing-in ceremony too place at Raj Bhavan in Chandigarh. Governor Satyadeo Narain Arya administered the oath of office and secrecy to Khattar.

Governor Satyadeo Narain Arya has reached the venue where he will administer the oath of office and secrecy to CM Manohar Lal Khattar and his deputy Dushyant Chautala.

Shiromani Akali Dal patron Parkash Singh Badal and party leader Sukhbir Singh Badal arrive at the Raj Bhawan in Chandigarh ahead of the swearing-in ceremony of the Chief Minister and Deputy Chief Minister of the state. Other leaders are also present.

Haryana: Shiromani Akali Dal patron Parkash Singh Badal and party leader Sukhbir Singh Badal arrive at the Raj Bhawan in Chandigarh ahead of the swearing-in ceremony of the Chief Minister and Deputy Chief Minister of the state. Other leaders are also present. pic.twitter.com/6j5o6k57sq

Jannayak Janta Party leader Digvijay Chautala said that until yesterday they (Congress) were saying that it (BJP-JJP alliance) is against people’s mandate. “We have come after winning against them too. Congress could not gather the numbers,” he said.

This time, five members of the Chautala family, all belonging to Chautala village in Sirsa district, were elected to the 90-member Haryana Assembly from different political outfits. While INLD General Secretary Abhay Chautala got elected from Ellenabad, his estranged nephew Dushyant Chautala won from Uchana Kalan in Jind district while his mother Naina Singh Chautala got elected from Badhra. However, Aditya Chautala, the grandson of Devi Lal, lost to Congress’ Amit Sihag from Dabwali by 15,647 votes.

Six-time MLA Anil Vij, Banwari Lal, Seema Trikha from the BJP, while Ram Kumar Gautam and Ishwar Singh from the JJP are among the probables who are likely to get ministerial berths in the new Haryana government. Vij, who was the health minister in the previous term, is the senior most leader of the party to have been elected for the sixth term from Ambala Cantt. Names of other BJP MLAs doing rounds for ministerial berths are Mahaipal Dhanda, Ghanshyam Saraf, Kamal Gupta, Subhash Sudha and Deepak Mangla.

Independent MLA Ranjit Singh is among the frontrunners for a berth in the new Khattar cabinet. He is the brother of the jailed Om Prakash Chautala, the grandfather of Dushyant Chautala, and has estranged relations with the Chautala family. Ranjit Singh said that he has extended unconditional support to the BJP. He was among the first persons to announce his support for the BJP. Ranjit Singh fielded himself as an Independent from Rania in Sirsa district after the Congress denied him a ticket. He won the election by 19,431 votes, defeating Haryana Lokhit Party candidate Gobind Kanda, brother of businessman-turned-politician Gopal Kanda.

The vote share of the Congress, which has emerged stronger than the last polls but was behind the BJP, is almost the same as it was in the Lok Sabha polls. The party got 28.42 per cent of the total votes polled in the Lok Sabha election, while in the Assembly polls, it has secured 28.2 per cent votes and 33 seats.

Former BSF soldier Tej Bahadur Yadav quit the Jannayak Janta Party on Saturday, accusing it of betraying the Haryana voters by extending support to the BJP in forming the government. “Before the election, I had announced that if they tie up with the BJP, I will quit the JJP,” he said. Yadav, who was dismissed from the Border Security Force in 2017 after he posted a video complaining about the quality of food served to the troops, had joined the JJP for contesting the assembly election against Chief Minister Manohar Lal Khattar from the Karnal seat. He came third with 3,175 votes.

Dushyant Chautala is just 31. He is a business administration graduate from the California State University. He parted ways with the Indian National Lok Dal (INLD) in December 2018 after a bitter vertical split in the party and the Chautala family. Former MP and Dushyant’s father, Ajay Chautala, is the elder son of four-time Chief Minister and INLD President Om Prakash Chautala.

The vote share of the ruling BJP fell by a massive 22 per cent in the Haryana Assembly polls on Thursday, after the party secured over 58 per cent votes in the state in the Lok Sabha polls held in April-May and won all the 10 seats. The BJP got 36.3 per cent votes. CLICK HERE TO READ MORE

Who is Dushyant Chautala?

Almost a year after Dushyant Chautala formed Jannayak Janta Party (JJP) after splitting from the Indian National Lok Dal (INLD), the 31-year-old Jat leader has convincingly established that he is a force to reckon with in the state. His party emerged as the kingmaker in the polls as it won 10 seats. Dushyant Chautala is the great-grandson of former Deputy Prime Minister Chaudhary Devi Lal and grandson of former Haryana Chief Minister and INLD president Om Prakash Chautala. CLICK HERE TO READ MORE

The 10 MLAs of the Jannayak Janata Party of Dushyant Chautala are the wealthiest with their average assets being worth Rs 25.26 crore. Fifty-seven MLAs are aged between 41 and 50 years, 62 legislators posses a bachelor’s degree or above.

Haryana Deputy Chief Minister-designate Dushyant Chautala is like a child and his support to the BJP government is unconditional, newly elected Independent legislator Ranjit Singh Chautala said. Ranjit Singh is the brother of the jailed Om Prakash Chautala, the grandfather of Dushyant Chautala, and has estranged relations with the Chautala family. “Dushyant is like a child. The parents never feel bad if their children are with them,” he said after the BJP led by Manohar Lal Khattar and Jannayak Janta Party (JJP) chief Dushyant Chautala met Governor Satyadeo Narain Arya to stake claim for government formation in Haryana.

Eighty-four of the 90 newly elected Haryana MLAs are crorepatis, according to an analysis by poll watchdog Association for Democratic Reforms (ADR). In the outgoing assembly, 75 of the 90 MLAs possessed assets worth more than Rs 1 crore, which means the number of crorepati legislators has increased by 10 per cent, the ADR report said. The average of assets per sitting MLA in Haryana is Rs 18.29 crore, while it was Rs 12.97 crore in 2014, it said. According to the ADR analysis, 37 of the 40 BJP MLAs and 29 of the 31 Congress legislators are crorepatis. CLICK HERE TO READ MORE

Former Punjab Chief Minister Parkash Singh Badal on Sunday hailed the Bharatiya Janata Party (BJP) and Dushyant Chautala-led Jannayak Janta Party (JJP) for joining hands to honour the mandate of the people of Haryana. Extending wishes to the BJP-JJP alliance, the Akali Dal patron and five-time former Chief Minister Badal said he is confident that the two parties will work together in a constructive manner for the welfare of the poor and social harmony. Badal will be attending the swearing-in ceremony of the new BJP-JJP government headed by Manohar Lal Khattar in Chandigarh on Sunday afternoon.

The BJP won 40 seats and was six short of a majority in the 90-member Assembly. The Congress won 31 seats while the JJP emerged as the kingmaker with 10 seats. The Indian National Lok Dal and Haryana Lokhit Party won one seat each. The remaining seven seats were bagged by independents.

Jannayak Janta Party (JJP) leader Dushyant Chautala will take oath as the deputy Chief Minister of Haryana on Sunday. Governor Satyadeo Narain Arya will administer the oath of office and secrecy to Chautala. The swearing-in ceremony will be held at Raj Bhavan here at 2.15 PM.

Bharatiya Janata Party leader Manohar Lal Khattar will take oath as the Chief Minister of Haryana on Sunday. The swearing-in ceremony will be held at Raj Bhavan here at 2.15 PM. Governor Satyadeo Narain Arya will administer the oath of office and secrecy to Khattar.

The Haryana Legislative Assembly was delivered with a hung verdict in the Assembly elections held earlier this month. The ruling BJP emerged as the single largest party with 40 seats, six short from the majority mark of 45 in the House. The JJP of Dushyant Chautala won 10 seats while the Congress bagged 31 seats. The BJP sealed a deal with the JJP to form the next government in Haryana. Under the arrangement, the Chief Minister will be from the BJP and the deputy CM from the JJP.
More Stories on
Haryana Assembly Election 2019