Since the time President Jair Bolsonaro was elected as the new President of Brazil, there have been concerns related to BRICS as well as MERCOSUR. And how important will India be in the foreign policy of that country. 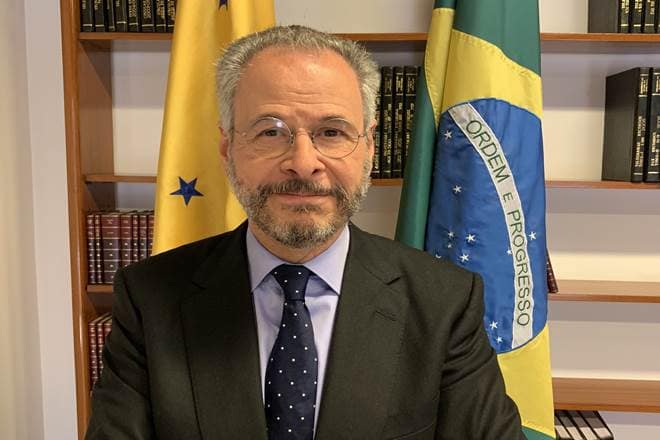 Since the time President Jair Bolsonaro was elected as the new President of Brazil, there have been concerns related to BRICS as well as MERCOSUR. And how important will India be in the foreign policy of that country. Andre Aranha Correa da Lago, ambassador of Brazil to India shares his views with Financial Express Online’s Huma Siddiqui.

Now that Brazil has a new President, will the India-Brazil relations change? Will Brazil move out of BRICS?

The new President Jair Bolsonaro has been sworn in. He is a different kind of politician. We already have received very clear information that BRICS will continue to be a priority. And we have the confirmation of all the BRICS meetings which will culminate with the summit in November 2019 in Brazil.

BRICS structure is something very positive in our relations first because it has created a very intense calendar of meeting; even though our countries are geographically very distant. The BRICS structure has created many opportunities for these meetings. The new President has never been to India, and he is being briefed about our country’s relations with India and its importance bilaterally as well as in various multilateral fora.

Also read| RBI vs Govt in 2018: A ‘husband-wife’ relation that turned stormy

What about the expansion of India-MERCOSUR Preferential Trade Agreement?

The new president is already very conscious of how important MERCOSUR is for Brazil and how it has some structures that are extremely favorable to some economic sectors in Brazil. And it also has some circumstances and some obligations that may restrict the flexibility of Brazil to negotiate Free Trade Agreements. The fact is that we are linked to MERCOSUR very strongly as its negotiation and consolidation has been a long process in our economies since the 80s.

We cannot expect to have the announcement of the negotiation of an agreement in the first months of the government nor before the elections in India. I believe we already have a special dialogue established between the MERCOSUR leaders and Indian authorities and we have exchanged some proposals on some lists of products in which we have preferential tariffs. There is no deadline set to start negotiations with India.

As a new envoy of Brazil to India, what steps would you take to enhance trade relations with India?

I have come from Japan to India. The bilateral trade between Japan and Brazil has been in recent years significantly lower than before. And it is not only with Japan. It is a pattern that applies to many of our most traditional partners. This is so as Brazil went through a very serious economic crisis. In fact we can see that we had three very strong crises at the same time: political crisis; economic crisis and a very significant moral crisis. I really believe that these crises have showed the amazing resilience of Brazil. It has allowed the Brazilian population to understand much better the functions of the government, parliament and the courts. This generation of Brazilian understands better the division of power in three branches than any generation before it. The great news about Brazil is that is has just started to recover economically as the government put a very competent economic group in charge which has succeeded in controlling inflation and lowering the interest rate. There were around 14 million unemployed during the crisis, but new jobs started to be created as of 2018, indicating the overall recovery of the economy.

So from an economic point of view I think we have very clearly a recovery even if the economy is only growing at one percent, which is very small by Indian standards. But the fact is that we had two years of strong recession, but since 2018 the overall situation of the economy has improved and there is strong support for the fight against corruption and, by the way, the main symbol of this fight – magistrate Sergio Moro – has been chosen by the president as Minister of Justice. It is going to be very interesting and even exciting to see how a different government is going to take power in Brazil, starting on January the 1st.

Bilaterally, Brazilian trade and investment should not and will not overlook India. India is the fifth economy in the world. It is with which Brazil has no historical or geopolitical issues which could oppose the two countries. We are extremely close in our vision of the world and BRICS symbolizes this in the sense that we believe that we have more relevance today than is recognized by the main structures of world power.

Have you identified any new sectors for cooperation?

Well, the fact is that we have to admit that the economic and investment performance between our two countries is still very modest. It is easy to identify areas, but it is less easy to convince our businessmen as there are so many options in the world today. However, significantly, Indian companies have increased investments in Brazil in recent years.

Recently, Sterlite Power participated in the transmission auction held by the Brazilian Government –that is a big presence of an Indian company in Brazil. Marcopolo is already here in a joint venture with Tata Motors for making buses. Since we have a very advanced banking system and great expertise in ATMs, Perto S. A., a Digicon Group company, a high technology and IT company and the world’s leading manufacturer of Automatic Teller Machines (ATMs) and Cash Dispenser Machines (CDMs) is present here. In addition, the Brazilian company WEG S.A. is producing electic generators and will soon start producing wind turbines for the Indian market.

Any bilateral defence cooperation with India?

Defence is not a central issue for Brazil. And obviously as a diplomat I say with pleasure that it’s thanks to diplomacy, as in the history of Brazil we have been negotiating borders with our neighbors and that was a central issue. Brazil has ten neighbors. And we have zero border issues with any of them. Another great thing is that Brazil and Argentina both agreed in the 90s to stop our nuclear arms program which existed. Therefore, the main threat to Brazil is not related to foreign governments but from insurgencies and drug related issues. Our armed forces are very small by any standards and are thoroughly professional. There are two main worries: the Amazon and the other is in the sea what is better known as Blue Amazon. The equipment needed to deal with situations has been specially built to carry operations in jungles as well as protect our coastline which is very huge.

The armed forces have developed specific abilities, and there is a very specific group for special operations in the jungles. There are possibilities for having exchanging quality equipment from both sides. For instance, Embraer, the Brazilian aircraft manufacturer, has developed an advanced model for military transport which could be used by the Indian Airforce. The Defence area is one in which we can significantly increase our dialogue.

So are there any big delegations expected from your country to visit India?

There is a need for key people from both sides to visit each other’s countries and see what would work in terms of new technologies. Fintech startups that have been launched in Brazil will be visiting India in April and we are planning to make this visit an annual event.

These start-ups have so much to share, especially new technologies in the Agriculture sector, in storage systems, analysis of satellite images for the agri sector and in the study of all sorts of bio pesticides and all sorts of fish.