Portuguese and Indian companies to work on UAVs, aircraft and speedboats

In 2017, Prime Minister Modi had visited Portugal when more than 10 agreements were signed in several areas which included space, avoidance of double taxation, nano-technology, biotechnology and higher education. 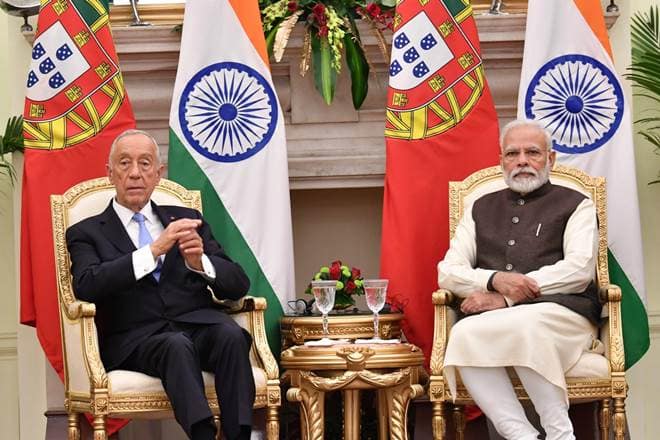 India and Portugal on Friday at the end of bilateral talks between Prime Minister Narendra Modi and Portuguese President Marcelo Rebelo de Sousa inked agreements and MoUs covering a wide range of sectors including defence. Seven agreements signed include the cooperation in setting up a national maritime museum heritage complex in Lothal, Gujarat, maritime transport and port development, mobility partnership and investments and start-ups.

Also the two countries signed seven MoUs in various sectors including defence studies and strategic areas, science and technology, aeronautics, and yoga. Portuguese group CEiiA (Centre of Excellence for Automotive Industry Innovation) and Hindustan Aeronautics Limited (HAL) has signed an MoU for establishing a partnership for the development of new projects which are related to the aeronautical and space technology.

Portugal is the largest international partner of the multi-mission airlifter Embraer KC-390 Programme. Embraer Company of Brazil will deliver five of these aircraft to Portugal from 2023. Portugal has been actively involved in the KC-390 programme from the development to the production of the aircraft.

Also Read
Russia completes the assembly of reactor vessel for Kudankulam nuclear power plant
Is Rafale M the final choice for the Indian Navy – Deal expected to be announced soon
US offers critical technologies to India under iCET
Towards COP28: UAE’s environmental stewardship and what it means for India

According to a top official, “Portugal is interested in using this expertise with state-owned HAL.” UAVISION of Portugal and the Indian company VEDA Defense Systems have signed an agreement which focuses on technology transfer, production and co-production of unmanned aerial systems. A training centre for the drones is expected to be created in India, with Portuguese know-how.

Keeping business opportunities in Africa in mind on Saturday Shipyards of Peniche and the GOA Shipyard is expected to sign an MoU for the construction of speedboats in Portugal and India. This co-production will be done through the transfer of technology (ToT) which incorporates polymers to be utilized in the hulls.

This will be inked in the presence of the visiting President Marcelo Rebelo de Sousa, who reaches Goa tomorrow who is accompanied by a high-level delegation, in his first ever visit to India.

In 2017, Prime Minister Modi had visited Portugal when more than 10 agreements were signed in several areas which included space, avoidance of double taxation, nano-technology, biotechnology and higher education. The pacts signed after Modi-Sousa talks included a joint declaration a bilateral mobility partnership and another on maritime transport.