At a time when manufacturing exports shrank by 5.95% and services grew just 1.7% in the first 8 months of the year, Commission for Agricultural Costs and Prices chief Ashok Gulatis projection that agriculture could touch $42 billion in FY13 has to come as a great reliefthats a 13.5% increase over FY12s mammoth $37 billion. That agriculture exports are doing well is obvious when you consider they increased more than 10 times from $3.5 billion in FY91 to $37.1 billion in FY12, growing at an annual rate of 13.6%. While agricultural imports have grown faster, from $0.7 billion to $17.2 billion, the agricultural trade surplus has increased to never-before levels of $20 billion. Even better, agriculture has become very globalised with the share of exports and imports to agri-GDP rising from around 5% in FY91 when economic reforms began to 18% in FY12 (see graphics). As a result, according to a paper by Gulati, along with Surbhi Jain and Anwarul Hoda, Indias share of global agricultural exports rose from 0.8% in 1990 to 2.1% in 2011, a share which is higher than that of global merchandise exportsthis rose from 0.6% to 1.7% in the same period. 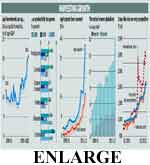 Think of the huge opportunity this gives the finance minister to fix his budget deficit (http://goo.gl/UwzI7)exporting 10 million tonnes of wheat will fetch $3 billion to the exchequer. And, since FCI stores around 16-17 million tonnes of grain out in the open (covered by a tarpaulin of uneven quality), not exporting this would just mean the grain would rot. Indeed, according to Gulatis calculations, the excess foodgrains stock held by FCI alone has cost the government R1 lakh crore or 1% of GDP.

After years, actually decades, of talking of how pathetic Indias agricultural performance has been, how has the farm sector suddenly become this great beacon of hope This is the sector, after all, where productivity levels are a fraction of those overseas, where small land holdings and the absence of extension services has meant no R&D can be imparted to millions of small farmers. Which is why, for instance, while Punjabs wheat yields are 4,415 kg per hectare, Bihars are only 1,946.

Whats happened is a whole agriculture revolution while we were, as it were, sleeping. While the export surplus of $20 billion in FY12India has been a net exporter of agricultural goods for at least the last two decadesis the obvious manifestation of this, the reason for the agricultural surge is the sharp hike in investments in the sector. After stagnating at 9.3% of agricultural GDP in FY82 and 9.1% in FY92, this rose to 14.6% in FY02 and further to 20.3% in FY10.

What made this new reality happen is a combination of several things, but underlying all of them is the fact that the farmer is not the dumb hick most believe. When Bt promised better cotton output, farmers switched to it in droves. From nearly zero in FY02, 81% of all cotton cropped was Bt by just FY08, as a result of which yieldsthat rose from 220 kg per hectare in the 1980s to 298 in the 1990ssuddenly jumped to an average of 443 in the 2000s; those in Gujarat, where Bt cotton first took root, averaged 582 kg per hectare in the 2000s. Not surprising then, that by the end of the 2000s, India was the worlds second-largest cotton exporter.

When hybrid maize offered a similar jump in yields, farmers took to this in a big way, as a result of which yields rose around 30% in the 2000s.

This was perhaps the single-largest change factor in Indian agriculture. Given that, in the case of Bt cotton, the official system had not okayed its cropping, it was the dealer network of seed companies that spread the knowledge among the farmers. Almost at one go, then, the inefficiency of the government-run extension services didnt matter. And with this, India got access to global R&D budgets of the sort that could never be imagined. As Gulati points out, the Indian Council of Agriculture Research has an R&D budget of R2,700 crore a year while Monsanto alone spends R7,500 crore ($1.5 billion) a year and Pioneer R4,000 crore ($800 million).

None of this means agriculture is out of its rut or that India has a hugely productive farm sector. But it means enough change is happening for the sector to deliver a 3% average annual growth in the past two decadeswhile the first and second surges, of the green and white revolutions, were driven by the government/cooperatives, the current surge has largely been driven by the private sector. According to Gulati, by 2012, private firms like Nestle were working with more dairy farmers than cooperatives were.

In the case of rice (see graphic), local Indian prices have consistently been lower than those internationally, making India one of the more competitive rice producers. In the case of wheat, Gulati/Jain/Hoda show that while India hasnt always been competitive in wheat, the surge in global prices after adverse weather in the US and Russia has made India very competitive. Ditto for maize where India exported a record 3.9 million tonnes in FY12 and 2.1 million tonnes in the first half of FY13for FY13, Gulati/Jain/Hoda are projecting a 4 million-plus tonne export.

The joker in the pack, of course, is the governments policy of banning exports whenever the price risesthe argument, presumably, is that since production is static, any rise in exports will result in supply shortages and therefore price increases. While this isnt strictly true since, as can be seen in the case of cotton, the presence of a lucrative export market has meant a surge in production as well. Two, if the same bans dont apply to industrial producers, theres little reason why they should apply to just agriculture. How a stable agricultural export policy will help is best seen from the examples of wheat and rice. Farmers in India couldnt take advantage of their global competitiveness since exports of rice got banned in April 2008, but once they were allowed in September 2011, exports have boomed7.2 million tonnes in FY12 and 4.7 million tonnes in the first half of FY13 (India was the worlds largest rice exporter in 2012). In the case of wheat, once the ban was lifted, a total of 7.4 lakh tonnes were exported in FY12; this is expected to rise to 6.5 million tonnes in FY13 and even more in FY14 if global prices remain at current levels.

Unlike in the past, this time around, the good news is that the powerful finance minister will be adding his might to the agriculture ministers when it comes to turning down attempts to ban exports.