The CAG’s Observations, in its Audit report on Capital Acquisition by IAF, should have been integrated in the defence procurement process. 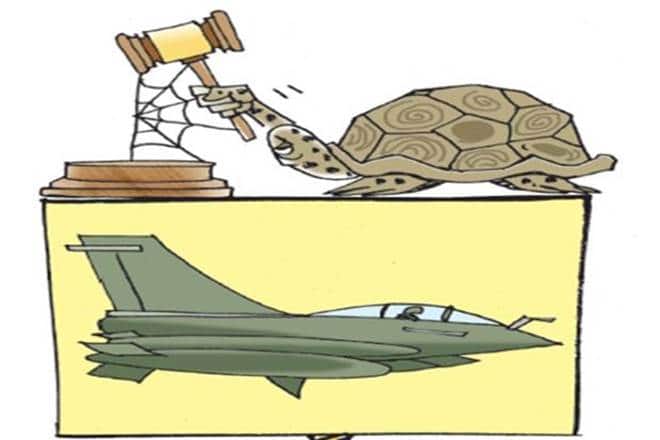 The unwarranted delay, complex procedures and decision-making processes are cost-ineffective. It can lead to the acquisition of technologically inferior armaments

Prime Minister Modi’s second stint has raised many expectations. The relentless encouragement, and enabling policy environment provided by the NDA’s earlier regime through a series of reforms gave an impetus to ease of doing business, and ease of living and creating national infrastructure to build a new India. A cost-effective procurement process, along with development of indigenous capabilities, products, and technologies would give our armed forces a decisive edge in defending India’s national security, territorial integrity, and sovereignty.

India’s armed forces have been facing enormous challenges. Spelling out India’s defence operational requirements, and finding solutions to the problems therein would serve as a testimony to the Modi 2.0’s commitment. It is time for India’s defence minister, Rajnath Singh, to lay down an appropriate policy framework to empower the armed forces to discharge their responsibilities. Valuable lessons can be learnt from the Comptroller and Auditor General of India’s (CAG’s) performance audit of capital acquisition in the Indian Air Force (IAF), placed before Parliament in February, 2019, to resolve some chronic bottlenecks in the IAF’s defence procurement process.

The CAG report examined 11 contracts of capital acquisition signed between 2012-13 and 2017-18, with a total value of approximately Rs. 95,000 crore. It highlights systemic issues in the acquisition process and gives recommendations to rectify deficiencies in the procurement process. The acquisition process begins with the formulation of user requirements, known as the Air Staff Qualitative Requirements (ASQR). The formulation of ASQR is critical to the defence acquisition process because it determines quality, price, and competition. In a 2007 report, CAG had recommended that ASQRs be stated in terms of measurable functional parameters. However, IAF did not implement this, and made the ASQRs exhaustive with technical details. This led to serious, avoidable consequences—all vendors failed to meet the ASQRs. Moreover, IAF changed ASQRs repeatedly during the procurement process.

Also Read
Greening the Budget
Understanding the four Vs of operations management – volume, variety, variation and visibility
Evaluating Mintzberg’s 10 schools of thoughts for strategy formulation
Why management is both art and science

The nation’s supreme audit institution, mandated by the Constitution to help enforce public accountability, effective service delivery, transparency, and good governance, had no option but to repeat its 2007 recommendation that ASQRs should be stated in terms of functional parameters. Further, CAG recommended that technical experts with knowledge of the systems be involved in the acquisition process.

As required, offers are sought from varied vendors by issuing a Request for Proposal (RFP). Vendors respond to the RFP by giving technical and commercial bids. CAG found that there was limited competition as the number of vendors who responded to the RFP was less than that of those invited to bid. Reasons for this include delays in the acquisition system, and inappropriately defined ASQRs. CAG recommended that the defence ministry consider open, competitive tendering in case of non-strategic items, like basic trainer aircraft and weather radar.

CAG observed a lack of consistency in technical evaluation across procurement cases: In some cases, such as doppler weather radars and attack helicopters, technical bids were rejected when vendors failed to meet all the ASQR parameters; but, in the case of medium multi-role combat aircraft (MMRCA) and heavy lift helicopters, bids were technically qualified even when they did not meet critical ASQRs.

A Contract Negotiation Committee was constituted to evaluate the price bid, and negotiate the final contract. The committee was required to estimate the benchmark price to assess the various bids before opening the price bid. CAG found that in eight procurement cases, the benchmark price was significantly different from the bid price. The report opined that repeated off-mark pricing evidenced inability to estimate the market price.

The central auditor pointed out that delays in acquisition were essentially due to a complex, multi-level approval process; to be precise, each procurement case has to go through 11 stages, from initiation to contract-signing. The current acquisition system is, therefore, unlikely to support IAF’s operational preparedness. CAG recommended that the defence ministry structurally reform the entire procurement process to facilitate expeditious acquisition.

CAG examined the procurement process for MMRCA. It remarked that IAF had discarded its original August 2000 proposal to acquire 126 Mirage 2000 II aircraft in 2004, and, in 2007, it decided to acquire 126 Rafale aircraft from Dassault Aviation. However, the commercial negotiations with Dassault were not concluded, and in 2015, the decision was altered to procure only 36 Rafale aircraft through an inter-governmental agreement with France. Comparing these two deals, CAG concluded that the price of the 2015 deal was less than that of the 2007 one by 2.86%. The latter included a bank guarantee from the French government to safeguard the national interest in case of default, making the vendor—the French government—liable to provide payment. However, the 2015 deal excluded a bank guarantee.

The government’s defence procurement policies have been subjected to criticism. Enormous delays in the procurement process thwart the urgency in defence procurement. CAG’s observations should have been integrated in the defence procurement process. The unwarranted delay, and complex procedures and decision-making process seem to be cost-ineffective. More importantly, it could damage national interest and lead to the acquisition of technologically inferior armaments. India must get value for the public money it spends. It is high time the government, under Modi 2.0, took stock of things with new policy directions on all defence and security related matters, and implement them effectively, optimising the scarce public resources.

(The author is Former Director General, CAG of India. Views are personal)