COVID-19 may double poverty in India

Even a 25% fall in their incomes due to the lockdown will make 354 mn more people poor. fixing this with cash transfers will cost the govt Rs 19,500 cr per month. 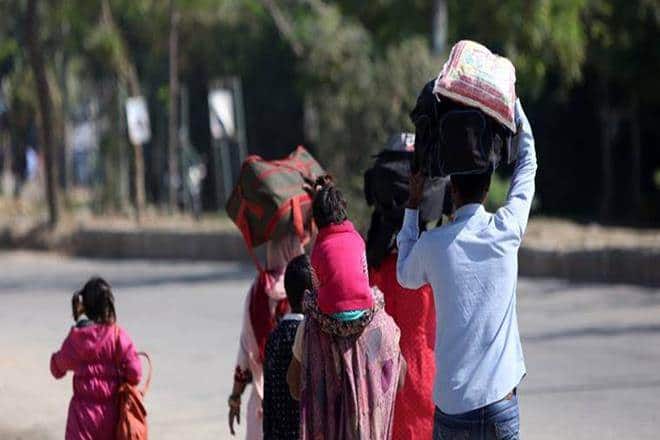 The latest available data is for the year 2011-12 (2017-18 NSSO Survey report is pending for release) and in that year, India had about 270 million poor people, or about 21.9% of the population. (Representative image)

In the second week of April 2020, UN’s International Labour Organization (ILO) claimed that about 400 million workers from India’s informal sector are likely to be pushed deeper into poverty due to Covid-19. There is no dispute that poverty in the country will worsen, but the question is, by how much? We try to answer this using National Sample Survey Organization (NSSO) and Planning Commission data.

Through its quinquennial consumption expenditure surveys, NSSO presents estimates of monthly per capita consumption expenditure (MPCE) of households in the country. This data forms the basis for estimating poverty levels, as was done by the erstwhile Planning Commission. From NSSO’s consumption data, the Commission estimates poverty thresholds, based on which poverty ratios in Indian states and UTs were estimated. It may be noted that MPCE is taken as proxy for income.

The latest available data is for the year 2011-12 (2017-18 NSSO Survey report is pending for release) and in that year, India had about 270 million poor people, or about 21.9% of the population. Using NSSO’s unit-level MPCE and Planning Commission’s state-level poverty data as our base, we simulate the impact of income shock due to Covid 19 on poverty in India. Then, using population data for 2019-20, we extrapolate to estimate poverty at current levels.

We simulate for two income shock scenarios. In the first, all individuals lose a month’s payment, which implies a loss of about 8.3% in average MPCE (we round this up to 10%). In the other, individuals suffer income loss for three months, implying loss of about 25% in average MPCE (results for this shock are presented below). We assume (i) a uniform shock across fractiles (based on MPCE, NSSO distributes population into 12 fractiles) and (ii) incomes to return to pre-Covid levels after the three month (March – May) disruption.

Let us illustrate our calculations using the example of Uttar Pradesh. In 2011-12, poverty threshold levels for the state (per person per month) were Rs 768 and Rs 941 for rural and urban areas, respectively. Based on this, the state’s poverty ratio was estimated to be 29.4%. If we introduce an income shock of 25%, then, measuring against the same poverty threshold levels, UP’s poverty ratio comes to be 57.7%. Upon applying this new ratio to UP’s 2019-20 population estimate, we find that about 71 million more poor people would be impoverished in the state.

Using the same method for all states and UTs, we find that with the 25% shock to incomes across all fractiles: (i) India’s overall poverty rate rises to 46.3%, i.e., more than twice the 2011-12 levels, and higher than even the 1993-94 levels (see graphic); and (ii) this means that India will have an additional 354 million poor, taking the total count of the country’s poor to about 623 million.

At the state level, we find that the shock (i) more than doubles poverty in 27 of the 35 studied states and UTs (see graphic), and (ii) five states—UP, Bihar, Maharashtra, West Bengal, and Madhya Pradesh—account for more than 50% of the 354 million newly added poor.

As mentioned before, for the sake of simplicity, we made some assumptions. First, we assumed a uniform income shock across all fractiles. There is enough evidence that people in the lowest fractiles (the ones who are already poor, or at threshold), most of whom work in the informal sector, are the worst hit. This indicates that the income shock is not likely to be uniform across fractiles. Second, in our worst-case scenario, we assumed a 25% income shock. Sadly, there is growing and widespread evidence of job losses among low-income fractiles, indicating that an income shock much greater than this is likely for the people in these fractiles.

Thirdly, our assumption about incomes eventually recovering to pre-Covid-19 levels after three months is also likely to be overly optimistic. Income levels in the coming months will be determined by how the economy recovers, and how lost employment is regenerated. Nevertheless, the above exercise is useful as it gives us at least a base estimate.

In summary, we can infer that due to Covid-19, (i) poverty will grow, with India adding about 354 million more poor people, and (ii) inequality will worsen.

We use our MPCE analysis to propose a solution. We found that if the Centre can make direct benefit transfers (DBT) of Rs 312 per person per month to the poor, most people in most states can come back to their pre-Covid levels of MPCE. That the country’s economic situation was not so bright even in pre-Covid times is another matter. Given there are likely to be about 623 million poor people, the DBT transfers will cost the government about Rs 19,500 crore per month. If the Centre can increase the transfer amount to about Rs 750 per person per month, it will not only help the poor recover from the economic damages resulting from the pandemic but also assuage their poverty. This DBT transfer would cost the state about Rs 46,800 crore per month. The government may want to consider transferring the DBT amount at least for the next six months, and in addition to other benefits like increased PDS entitlements, subsidy on cylinders, etc.

This pandemic is as much a social and economic crisis as it is a humanitarian one. Considering the uncertain path that lies ahead, helping the country’s poor become self-sufficient and better prepared can prove to be the best weapon against the deadly virus, and such a DBT can go a long way in that.