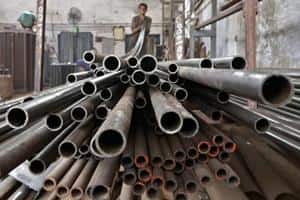 Steel industry is passing through stress this time. Government is fully aware of it. (Reuters)

The steel ministry will pitch for a dedicated fund for the capital-starved steel sector under the National Investment and Infrastructure Fund (NIIF), India’s first quasi-sovereign wealth fund, reports fe Bureau in New Delhi.

The move is aimed at bringing down capital costs for the steel industry, which could see a staggering $190 billion in investment if the country has to reach a 300-mtpa target by 2025-26. The ministry feels that though domestic demand has grown slower than anticipated in the last couple of years, in the medium term demand would pick up, making room for steel capacity expansion.

“The government is working on operationalising NIIF and that is envisaged as a mother fund and within that there will be specific sectoral funds. We are trying to see how we can structure something for the steel industry there, which I think will definitely go a long way in bringing down the capital costs,” steel secretary Aruna Sundararajan said at an event here on Friday.

The NIIF is being operationalised with an initial corpus of Rs 40,000 crore. The government would hold up to 49% in the NIIF, which is expected to catalyse financing of infrastructure projects by leveraging the same multiple times. The remaining stake would be offered to domestic as well as foreign partners.

With the paucity of equity capital felt strongly in many key infrastructure sectors like steel, roads, ports and railways, the government is in dialogue with at least four global sovereign wealth funds including the Abu Dhabi Investment Authority (ADIA) to invest in directly in NIIF or its funds. Last year, the government had also entered into an agreement with the United Arab Emirates for channelising $75 billion an India-UAE infrastructure fund to support investment in India’s plans for rapid expansion of infrastructure.

Sundararajan said high capital cost is one of the major reasons that affects the competitiveness of Indian steel industries.

Meanwhile, the secretary said that the minimum import price (MIP) imposed on 171 products in February is under constant review as the government has no intention to continue with it unless “strictly necessary”.

“MIP is certainly under constant review because we do not intend to continue MIP unless it is strictly necessary. So if industry is coming back to a healthier position and if global prices continue to stay where they are, then yes, definitely MIP will be reviewed,” she said.

With the imposition of MIP, the surge in imports has come down, prices have firmed up and production has ramped up for some companies reeling under severe low capacity utilisation.