Bank of Baroda shares declined nearly 6 per cent on Tuesday after a brokerage house CIMB cut target price for the public sector lender’s stocks to Rs 145 from Rs 195 earlier. 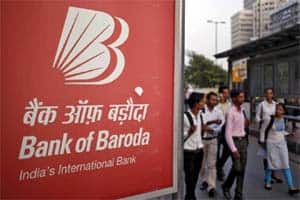 Bank of Baroda shares, which gained over 20 per cent in Monday’s trade after positive comments by the management, declined nearly 6 per cent on Tuesday after a brokerage house CIMB cut target price for the public sector lender’s stocks to Rs 145 from Rs 195 earlier.

However, the brokerage house maintained ‘add’ rating on Bank of Baroda shares and believes among state-run lenders, Bank of Baroda’s liabilities franchise and capitalisation put the lender on stronger footing.

Bank of Baroda on Saturday reported the highest-ever quarterly loss in the nation’s banking history at Rs 3,342 crore for the October-December period after recognising and providing for the entire quantum of stressed assets identified through a special review undertaken by RBI. However, the management believes that all non-performing assets were accounted for and it could return to profitability next fiscal.

According to Prabhudas Lilladher, BoB performance was disappointing as asset quality continued to deteriorate sharply with slippages coming in at all time high level at around 15 per cent of loans (annualised), but taking upfront all accounts from RBI’s AQR and some more weak assets to NPAs in this quarter alone and not postponing for future quarters. As a result of the exercise performance remained under pressure impacted by interest reversals accompanied with high provisions. Management reiterated that it will not require capital for next 18‐24 month even after considering a moderately deteriorating environment and focus will be to improve efficiency.

“We have cut our estimates as we increase our credit cost and lower our credit growth and lower our target price to Rs 137 (from Rs195) based on Sep‐17 ABV. We remain positive on the Bank,” the brokerage house said.