Nitish Kumar believes in pomp and show instead of development: Jitan Ram Manjhi 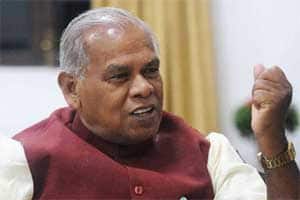 “Nitish Kumar believes more in pomp and show instead of development. He indulges in many things that are not needed with an intention of becoming an international personality,” Manjhi, who was once a protege of Kumar, said here.

“Some constructions like the International Museum, Convention Centre, new building for Legislative Assembly, new residences for legislators were not necessary at all as we are fighting against poverty in the state. There was no need for these buildings,” Manjhi said.

The former chief Minister said the old Patna Museum could have been easily expanded to cater to the present day visitors but Kumar instead opted for an International Museum.

“Spending Rs 500 or 700 crore on museum or other buildings should have been thought about only after paying attention to the problems faced by our people like teachers, contractual workers, policemen and home guards,” he said.

Manjhi also said that “Rs 40 to 50 lakh was the price of transfer and postings of district magistrates and superintendents of police.”

Manjhi resigned from the Chief Minister’s post on February 20 after holding it for nine months that were fraught with bickering within the Janata Dal United (JDU).

Kumar replaced him by embarking on his fourth term as the CM.

About decisions taken by him but subsequently annulled by Kumar, Manjhi said that these were pro-people and would have had long-term impact on the betterment of Bihar.

“I noticed that 10 per cent of the cost of projects was going to contractors as benefits. This amounted to Rs 4,000 crore per annum. I thought if this money goes to people from the deprived sections of the society then there was no harm. Hence I advocated reservations in contracts of projects,” he said.

Manjhi said that the 13-month salary every year was decided for the policemen since they had been agitating for it for a long time. The provision was in place in several other states, given their long duty hours and lack of holidays.

Reacting to Rashtriya Janata Dal (RJD) chief Lalu Prasad’s support to Kumar, Manjhi said “it could be a topic of research.”

He, however, said Lalu Prasad was several notches better than Kumar.