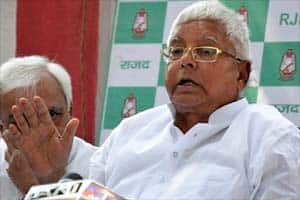 “I dare BJP to come clean on its support to Manjhi. It should tell clearly how far it will go with him. Hiding behind the curtain or staying behind the scene is not good,” he said.

“Manjhi met Prime Minister Narendra Modi last evening and his tone changed after the meeting. It seems from his statements that BJP is involved in the political game that is happening,” Prasad said.

The RJD supremo was talking to reporters at his 10, Circular Road residence here after meeting Bihar Governor Keshri Nath Tripathi. He arrived from New Delhi this afternoon and gone to the Raj Bhawan with Nitish Kumar to express his support to JD(U).

“We — RJD and JD(U) — have always supported dalits and mahadalits. This is the reason that Kumar chose Manjhi as the Chief Minister…,” he said.

Prasad said that in the current situation, Manjhi should also tell to which party he belongs, as JD(U) has expelled him.

He said his entire party was staunchly in support of Kumar, as he was the JD(U) Legislature Party leader. “Previously, the RJD support was for JD(U) and today also it is for JD(U),” he said.

“Our party had submitted its letter of support for JD(U) to the Governor yesterday itself. There was no need as such for our MLAs to march to the Raj Bhawan with JD(U) and Congress MLAs today, but they did. My entire party with 24 MLAs is with JD(U), which has a support of 130 MLAs,” he said.

The RJD supremo said he advised to the Governor to judge the support of MLAs to Manjhi by using a “thermometer” and take a quick decision on government formation.

“The entire process should be completed as soon as possible by the Governor and Nitish Kumar should be administered oath. This is necessary to advance the state on the path of development and defeat communal forces that want to become strong here,” Prasad said.

He said the move behind today’s meeting with the Governor was to get the time fixed for the swearing-in of Kumar.

The RJD leader left for New Delhi in the evening, where he is busy preparing for marriage of his youngest daughter Raj Lakshmi to Tej Pratap Yadav, a grandson of Samajwadi Party Chief Mulayam Singh Yadav. The wedding is scheduled on February 26.