Fortunate if Jitan Ram Manjhi resigned because of me: Bihar Speaker 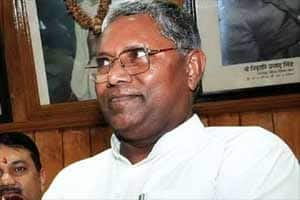 Bihar Assembly Speaker Uday Narayan Chaudhary today said he considered himself “fortunate” if Chief Minister Jitan Ram Manjhi resigned due to him, and justified his decisions taken in the run-up to Manjhi’s floor test as “correct, constitutional, according to the rules”.

“I heard the allegations made by Manjhi. He said he resigned due to me. I consider myself fortunate if this is so,” Chaudhary told mediapersons at the Assembly premises.

After resigning as chief minister yesterday, Manjhi had alleged that he decided to quit when it became apparent that the Speaker, acting at the behest of Nitish Kumar, would not allow secret ballot during confidence vote.

Claiming that he had support of majority of MLAs, he also said he did not go for the floor test considering the threat of bloodshed.

“I am surprised that the Chief Minister, who is the head of administration, said he would have been murdered. If he is himself saying such things, we can just wonder the condition of 11 crore people of Bihar. He himself is accepting the sorry state of governance,” the Speaker said.

Chaudhary pooh-poohed Manjhi’s accusations that the presence of ambulances, doctors and fire tenders indicated that fight would have happened in the Assembly.

“Ambulances, doctors, fire tenders are present when people with Z category security are present, and when Assembly is in session. These things were picked up to levy baseless, imaginary accusations,” he said.

He hit out at Manjhi’s statement that his demand for secret ballot during trust vote was not accepted and open voting would have jeopardised the lives and membership of MLAs supporting him.

“Whatever steps I took were correct, constitutional and according to the rules. Secret voting was being demanded, but there is no such provision in the rules of the Assembly. Rule 56 of the House clearly states that voting is to be done by ‘voice vote’.

There is a provision of division of votes if members demand it,” Chaudhary said.

The Speaker said Article 208 of the Constitution empowers all state Assemblies to frame their own rules.

On seating arrangement of MLAs during the trust vote, he said it was also done according to rules. Manjhi, his ministers and Leader of

Opposition Nand Kishore Yadav were given their designated seats just like previous sessions.

“JD(U) wrote to me seeking to sit in the opposition and Manjhi was not their leader anymore, I gave Manjhi the designated seat of the CM. His ministers were also placed around him. Yadav was also given the seat of Leader of Opposition,” he said.

Asked about the need to convene a press conference to give clarifications, Chaudhary asked “Should we allow wrong information to go to the public?”

He said fresh session of the Assembly will be convened after the new Chief Minister is sworn-in and the cabinet informs him about the dates for the session.