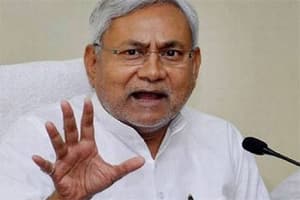 NDA today accused JD(U) leader Nitish Kumar of “sacrificing” a Mahadalit while Congress saw BJP’s “panic” behind Chief Minister Jitan Ram Manjhi’s resignation hours before a trust vote in Assembly and said it will pay the price for its “conspiracy” in Bihar elections.

“Nitish Kumar will have to answer the people of Bihar and convince them on why he made Manjhi the Chief Minister eight months back.

“Kumar keeps on playing such games for his political opportunism. People of Bihar are seeing all this. He has no principles. He keeps on doing such immoral things to remain in power,” BJP leader and Union Minister Dharmendra Pradhan said.

BJP leader Shahnawaj Hussain said that the “BJP stood by the Chief Minister, a Mahadalit.”

Describing the entire issue as an “internal matter of JD(U), Hussain said, “which group has majority was to be decided on the floor of the House. BJP stood with what was just. We did not leave a Mahadalit in the lurch. We stood by him strongly.”

The reactions came after Manjhi submitted his resignation to Governor Keshari Nath Tripathi after making an unscheduled visit to Raj Bhawan in morning.

Manjhi, who rebelled against Nitish Kumar, was expelled by JD(U) and was to prove his majority after the Governor’s address.

Yesterday, the BJP announced support to Manjhi but he still did not have the numbers to win the trust vote after JD(U) and its allies like RJD and Congress rallied behind Nitish Kumar.

Congress leader Manish Tewari said that the “conspiracy” had to unravel at some point of time.

“The conspirators realised that if they would go ahead with their support, people will punish them very dearly. So at the last moment, the BJP panicked and therefore Manjhi became the fall guy.

“But the larger message is that if you try and destabilise a government, if you try and subvert political parties, if you engage in splits and if that is the way you want to do politics, you will be punished very severely. You wait and see what happens in Bihar elections,” Tewari added.