BJP stands unmasked after end of its game plan in Bihar: Nitish Kumar 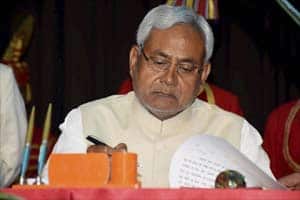 Since the new law is as draconian as the previous version, there is every likelihood of it being nullified as well. (PTI)

Bihar Chief Minister Nitish Kumar slammed Bharatiya Janata Party (BJP) saying the united secular forces in the state had “unmasked” its game plan of creating a situation for imposing President’s Rule by propping up Jitan Ram Manjhi against him.

“Today they stand unmasked after their game plan has been foiled by a strong unity among secular forces of Janata Dal United (JDU), Rashtriya Janata Dal (RJD), Congress and Communist Party of India (CPI),” Kumar said while answering nearly four-hour debate on his confidence motion in state Assembly.

Kumar, who was sworn-in as Chief Minister of Bihar for the fourth time on February 22 last, passed floor test comfortably.

While a total of 140 votes were cast in favour of the confidence motion none was against it. BJP with 87 members had staged a walk out in the House before the motion was put to vote. The trust vote was first approved by voice vote and latter on insistence of the treasury bench by lobby division.

Kumar said Delhi election had heralded the “downhill electoral journey” of BJP which would gain momentum from Bihar where poll was due later this year.

Nitish Kumar attacked BJP for propping up outgoing Chief Minister Jitan Ram Manjhi against him and tore into saffron party claim on welfare of mahadalits.

“If you are sincerely in favour of mahadalit than why don’t you change your slogan from’ Jai Sri Ram’ to ‘Jai Jitan Ram’,” he said mockingly.

Kumar also defended his joining hands with RJD of Lalu Prasad and instead questioned BJP tie up with PDP in Jammu and Kashmir.

“Are you feeling happy today when terrorists are being freed by your partner PDP?” Kumar taunted BJP members.

He alleged that by giving a go bye to its stand on Article 370, “BJP caused ideological death of Jan Sangh founder Shyama Prasad Mukherjee who had given the slogan one flag one constitution.”

Kumar hit out at BJP for “interfering” in the affairs of JD(U) by extending support to former Chief Minister Jitan Ram Manjhi.

“Changing CM is a priority of a party, but what for you (BJP) were meddling in our affairs to gain politically?” he questioned BJP.

“Though the mandate was for Keshubhai Patel in Gujarat, but Narendra Modi was made CM in his place by BJP in 2002. Likewise in Madhya Pradesh the vote was won in the name of Uma Bharti but first Babu Lal Gaur and later Shivraj Singh Chauhan were made CM there,” Kumar said to justify JD(U) deciding to bring him in place of Manjhi midway.

“I know you (BJP) are readying audio tapes of my comments on RJD chief Lalu Prasad when we were separate and his views on me at that time to play during Bihar poll later this year. We are also preparing to play comments on your new found friend (LJP) whose leader Ram Vilas Paswan had proudly told Pakistan President that he is the leader who broke away from NDA on 2002 Gujarat riot,” he said.

“We share the same background and has parted ways due to difference on question of certain issues in Bihar. Now seeing the present situation when secularism has been under threat we have joined hands to defeat BJP,” Kumar said.

The Bihar CM alleged that BJP had been playing foul with old associates like Shiv Sena and Shrimoni Akali Dal (SAD).

Earlier, leader of Opposition in Assembly Nand Kishore Yadav attacked Nitish Kumar for putting “sushasan” (good governance) which was invented during NDA rule to satiate his ego and in the lust to become Prime Minister.

He said Kumar claim of good governance was “self contradictory” as he has joined hands with RJD and Congress.

Yadav refuted any efforts by his party to facilitate ground for imposition of President rule in Bihar and said after six months the party would come to power in the state.