Barack Obama speaks out against rape in Grammy video 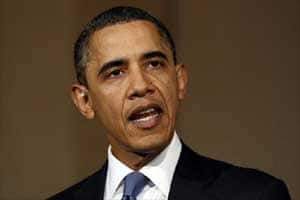 President disclosed this on a YouTube interview which the White House scheduled as a way to reach younger audiences as it promotes Obama's final State of the Union address on Tuesday. (Reuters)

US President Barack Obama called on American artistes to end sexual violence in a video appearance during the 57th Grammy awards here.

In his three-minute-and-fifty-seconds video, The US President asked artists at the Grammys to urge their fans to join government’s ‘It’s On Us’ campaign targeted at college campuses, which began in September.

“Artists have a unique power to change minds and attitudes and get us talking about what matters,” he said.

“It’s on us, all of us, to create a culture where violence isn’t tolerated, where survivors are supported and where all our young people men and women can go as far as their talents and their dreams will take them,” Obama said.

After Obama’s spot, activist Brooke Axtell told the story of her experience with domestic violence on the stage in a written-word performance.

Her speech was followed by a performance of ‘By the Grace of God’ by Katy Perry.