Across the Aisle by P Chidambaram: Count the year-end gifts

A figure that I am certain does not resemble Santa Claus — but no one knows who — has been visiting India throughout the year that is drawing to a close. 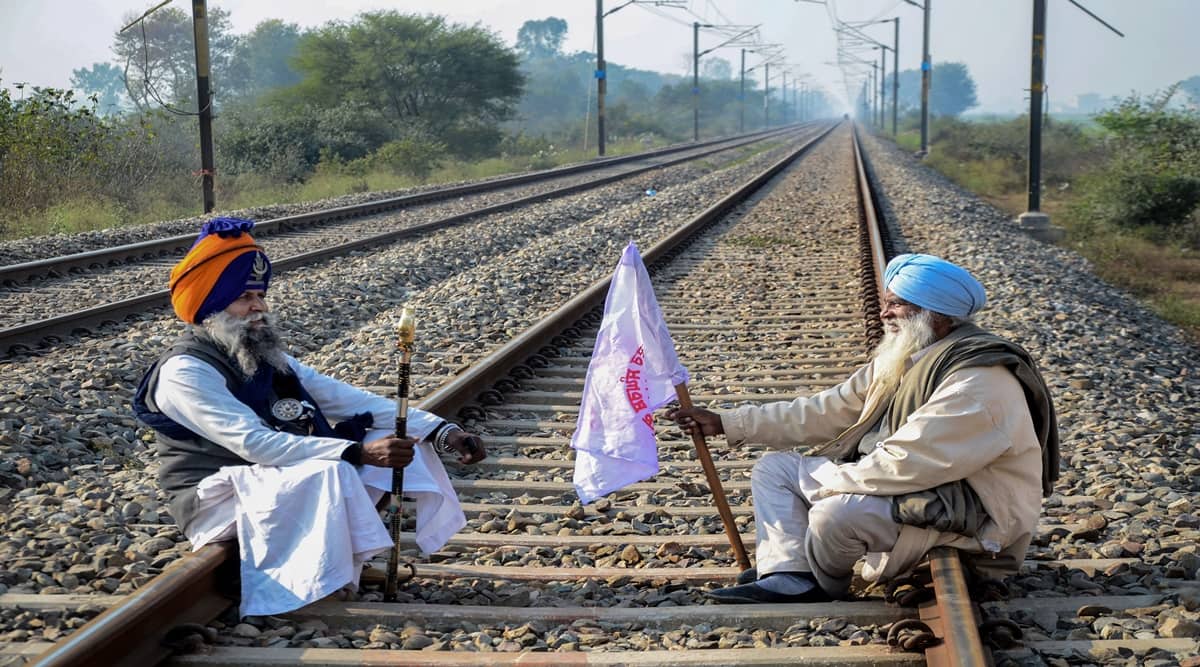 Farmers under the leadership of Kisan Mazdoor Sangharsh Committee block a railway track of Amritsar-Delhi railway line to protest against the state government for their various demands, including waiver of total debt of farmers and labourers, and compensation for the damage to paddy crops, at Devi Dass Pura village, near Amritsar (PTI Image)

This is the time of the year when Santa Claus is believed to visit homes with gifts. He may disappoint many, but the belief persists. It is a story to entertain children.

A figure that I am certain does not resemble Santa Claus — but no one knows who — has been visiting India throughout the year that is drawing to a close. He was an unwanted visitor. He brought unwanted gifts. Count them:

> For households: Retail inflation at 4.91 per cent. Of which, fuel and light inflation at 13.4 per cent. Santa’s suggestion: find a job that gives you dearness allowance and house rent, and the employer pays electricity and water bills.

> For post-graduate and doctoral scholars: Over 10,000 vacant teaching posts in central universities, Indian Institutes of Technology (IIT) and Indian Institutes of Management (IIMs). Their objective remains teaching and going by the outcomes they do a pretty decent job of teaching. It is fortunate that they have invented a way to teach without teachers.

> For those who pay EMI:  Higher interest rate on the EMI (monthly installment). Banks have written off ‘bad loans’ of Rs 2,02,783 crore in 2020-21. Borrowers must be grateful that banks are offering them loans.

> For the poor:  A queue. Please wait for your turn (which may never come). Public sector banks (PSB) are busy helping out poor corporates. In 2020-21, just 13 corporates owed Rs 4,86,800 crore to PSBs. Banks settled those dues for Rs 1,61,820 crore. PSBs were happy to do their bit for the welfare of the people of India (which, of course, are the 13 corporates) by absorbing the loss of Rs 2,84,980 crore. PSBs are willing to do more — provided you are a defaulting corporate.

> For economists and students of economics: A ‘V’ shaped recovery. At least that is what the government claimed. It did so on the high authority of the Chief Economic Adviser who is, by the way, leaving the government. Dr Krishnmurthy Subramanian brought a great amount of learning from the Indian School of Business to the Government of India, he will take back a great amount of unlearning from the Government of India to the Indian School of Business. Interestingly, Dr Gita Gopinath, Deputy Managing Director-designate of IMF, stopped by in Delhi last week and described the Indian economic recovery as ‘K’ shaped. Don’t agonize, no one is obliged to choose between the two letters, because there are 24 other letters in the alphabet.  Based on past experience, it can be predicted that eternal optimists will choose the letter ‘I’ and nihilists will settle for the letter ‘O’.  Economic geniuses will argue in favour of the letter ‘M’.

> For the Free Press:  A ‘bigger’ rank for India (currently, 142 out of 180, moving up from 140 of the previous year) in the World Press Freedom Index. India’s Minister of Information & Broadcasting may be right when he said that he does not agree with the conclusions drawn by ‘Reporters Without Borders’ who publish the Index. He should know a thing or two about press freedom. As long as India’s ‘Reporters With Orders’  print or telecast war cries such as ‘Goli Maaro’ and ‘Hara Virus’, there is ample proof that press freedom in India is alive and kicking. The Minister also reasoned that there was a ‘lack of clear definition of press freedom’.  Santa suggested that he should invite, among others, the following journalists and attempt a definition of press freedom:  Rajdeep Sardesai, Barkha Dutt, Karan Thapar, Sagarika Ghose, Paranjoy Guha Thakurta, Raghav Bahl, Bobby Ghosh, Punnya Prasun Vajpayee, Krishna Prasad, Rubin, Prannoy Roy and Sudhir Agarwal.

> For All the People: Policies that will ensure undernourishment, child wasting, child stunting and child mortality.  They earned India the rank of 101 out of 116 countries in the Global Hunger Index. As a welcome by-product, patriotic couples ensured that the Total Fertility Rate fell to 2.0, which is below the replacement rate.