FM Nirmala Sitharaman Press Conference Highlights: The government has finally taken up steps to resolve the migrant workers, small farmers, and street vendors crisis with the second round of measures largely focusing on providing work and benefits for India’s poor. 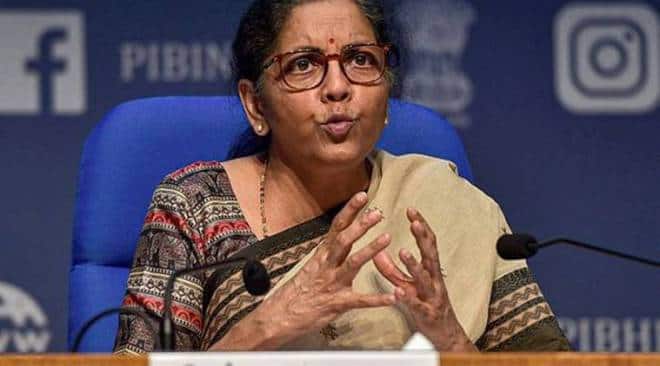 FM Nirmala Sitharaman Press Conference Highlights: The government has finally taken up steps to resolve the pain of migrant workers, small farmers, and street vendors with the second round of measures largely focusing on providing work and benefits for the poor. The government introduced one nation one ration card, through which people can buy ration at any ration depot in the country, to help the poor. Along with an increase in wage rate from Rs 182 to Rs 202, announced earlier, it was also announced that migrant workers will now get work in their own states under MNREGA as more opportunities have been created. Street vendors were also tended to as the government announced a special credit facility of Rs 5,000 crore for them. To be launched within a month, the scheme will help 50 lakh street vendors, providing them with an initial working capital of Rs 10,000. To strengthen the farm sector, nearly Rs 2 lakh crore will be given to farmers through Kisan credit cards. 2.5 crore farmers, including fishermen and animal husbandry farmers, will also get institutional credit at a concessional rate, Sitharaman said. Government’s efforts to change labour laws, along with its effort to make minimum wages applicable to all workers were also highlighted. On Tuesday the Prime Minister had said that the government is rolling out a Rs 20 lakh crore economic package to help thwart the fallout of coronavirus and lockdown, and also to help make India a self-reliant economy.

Two twinned measures are expected to vastly improve the reach, efficiency and ease of access to India’s PDS

Two twinned measures announced by the FM today are expected to vastly improve the reach, efficiency and ease of access to India’s Public Distribution System: Full national portability of ration cards, as well as complete automation of Fair Price Shops across the country, by March 2021. This will be a game-changing measure to improve the nutritional security of vulnerable sections of our society – Elias George, Partner and National Head, Infrastructure, Government and Healthcare, KPMG

Migrant workers need to be assisted in restarting the economy

Agriculture sector and rural economy will restart economic activities earlier and they need timely assistance by way of working capital. Similarly, migrant workers need to be assisted in restarting the economy as also the urban poor and self-employed to rebuild their livelihoods. Therefore, focus on these sections is appropriate and timely.  Hopefully, the focus of the stimulus in the next installments will be to help the sectors that have suffered a great deal and to empower the States in rebuilding the economy – M Govinda Rao, Chief Economic Advisor, Brickwork ratings.

Finance Minister Nirmala Sitharaman today announced a slew of measures for migrant workers and street vendors; however, how effectively these steps will help the undocumented section can not be determined yet. Read full story here

Govt’s measures too little, too late

The opacity and the invisibility of India’s informal workers will be a major hindrance in realising this, based on how ineffectual similar endeavours have been in the past, such as the Unorganized Workers Social Security Act (2008); hardly any worker possesses smart cards as per the Act. How will the package reach the recipients when most of them are undocumented? The modalities, it seems, haven’t been as thought out for it to truly be beneficial. This feels too little, too late. – Trinanjan Radhakrishnan, project coordinator, Oxfam India, told Financial Express Online

It is good to see that government is acknowledging that more needs to be done for the migrants, workers, street vendors, and another marginalized segment of our population. This crisis has pointed out glaring shortcomings in not only understanding their needs and their roles in nation-building but also something more basic – complete lack of data. So, announcements about defining and registering these workers will help in the future. But, like this, many other announcements today are welcome reforms, but those will take long time to fruition – Partha Chatterjee, Dean, International Partnerships, Professor and Head of the Economics Department, Shiv Nadar University.

The government has rightfully identified the agricultural sector as one of most impacted and the 2 lakh Cr loan to the Indian farmers is a big relief to the sector. As India moves towards a new economic revival with the spirit of self-reliance infused by Hon’ble PM, the agricultural sector has to be rapidly modernised and digitalised to have a supply chain continuity going on the face of any future crisis – Amith Agarwal, Co-Founder & CEO, AgriBazaar

The key takeaways from the second round of stimulus are more labour driven for the migrant workers, markets are still awaiting some reforms for the corporate and consumers to benefit from the stimulus. We expect a weak to flat opening tomorrow – Vikas Jain, Senior Research Analyst at Reliance Securities

The Ministry’s announcement to build rental housing complexes via public-private partnership will go a long way in resolving housing issues for migrant workers and Urban Poor who currently live in pitiable conditions. The concessions promised to manufacture units and industries to take up such projects and also allowing them to follow the BOT model similar to road projects, for constructing these rented dwellings will encourage many new players to enter the affordable housing segment – Ravindra Sudhalkar, CEO at Reliance Home Finance.

TDS on 23 items and TCS on 12 items of have been slashed by 25 per cent. No effect on salaries – Revenue Secretary

The last date for anyone wishing to avail the PMAY CLSS scheme was March 31, 2020 but now stands at March 31, 2021. The other category of LIG/EWS, however, has its last date of March 31, 2022. Finance Minister Nirmala Sitharaman in her press conference today has extended the last date of the Pradhan Mantri Awas Yojana (PMAY) Credit-Linked Subsidy Scheme (CLSS) both for the MIG-I and MIG-II categories. Read full story here

1200 shramik trains are ready to run

FM Sitharaman appreciates media persons, requests to spread words about what the government is doing.

Nearly Rs 2 lakh crore will be given to farmers through Kisan credit cards. 2.5 crore farmers, including fishermen and animal husbandry farmers, to get institutional credit at a concessional rate – FM Sitharaman

We wish to give the middle-income group (income of Rs 6 – 18 lakh per year) affordable houses under credit-linked subsidy scheme by extending it to March 2021- FM Sitharaman. 2.5 lakh middle-class people to get benefited through this move.

Initial working capital of Rs 10,000 will be given to each street vendor

Street vendors will get special credit facility of Rs 5,000 crore. Within a month, the government will launch the scheme for 50 lakh street vendors. Initial working capital of Rs 10,000 will be given to each street vendor – FM Sitharaman.

Current portfolio of Mudra Shishu loan is up to Rs 50,000 or less. After the three months moratorium, when borrowers start to repay, they will get interest subvention for the next 12 months.

So far, today’s announcements seem more about making working conditions easier and more conducive for workers, through changes in codes, rules and regulations; rather than direct liquidity, monetary or fiscal help.

In order to benefit migrant workers, the government has introduced one nation one ration card, through which people can buy ration across any ration depot in the country.

Free food grains supply to all migrants in the next two months, including non-card holders

EPF support of paying 24% is already borne by the government, it has now been extended for the next three months – FM

Government aims to make ESIC benefit compulsory to all establishments

The government aims to make ESIC benefit compulsory to all establishments. Provision is also for social security fund for informal sector – Finance Minister

More migrant workers can now get work in their own states

More migrant workers can now get work in their own states under MNREGA as more work has been generated. Wage rate has also been increased from Rs 182 to Rs 202.

14.62 crore man days of work has been increased, which is actually 40-50% more men enrolled

14.62 crore man days of work has been increased, which is actually 40-50% more men enrolled, compared to last May. 2.33 more wage seekers can be engaged – FM Sitharaman

Paisa portal pilot project will be started across the country

Paisa portal pilot project will be started across the country, which was earlier restricted only to Gujarat

Urban poor are contributing in Covid period under SHG scheme

12000 self-help groups all over the country have produced over 3 crore masks and 1.2 lakh litre of sanitisers. Urban poor are contributing in Covid period.

GoI has allowed state government to use disaster response fund to arrange food and shelter for the migrant workers. Rs 11,000 crore has been sent in that fund – FM Sitharaman

In the past two months, 63 lakh agriculture loans has been waived off

In the past two months, 63 lakh agriculture loans has been waived off, which means Rs 86,600 crore waived off – FM Sitharaman

Rs 6,700 crore has been awarded as working capital to state agencies

As liquidity support for farmers and rural economies has been happening in the last two months, Nabard has refinanced Rs 29500 crore for rural farmers – FM Sitharaman

Today’s announcement is for poor section, migrant workers, and farmers

Todays’ announcement is for poor section, migrant workers, and farmers, in addition to what was announced yesterday – Anurag Thakur