As fuel price skyrockets, rupee falls, Modi meets Saudi oil minister for some relief: All you need to know 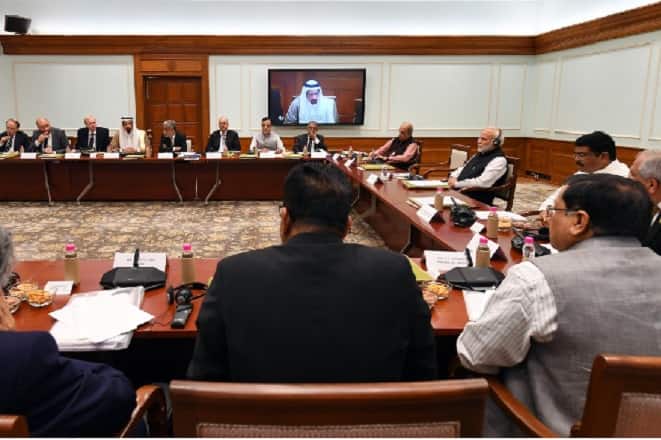 As petrol, diesel prices skyrocket, Modi meets Saudi oil minister for some relief: All you need to know

It was the third brainstorming session with the chief executives of top global and Indian oil and gas companies on how to moderate the spiralling crude oil prices. As India is the world’s third largest oil consumer and imports 80% of its total consumption, the country’s economy gets affected due to oil price volatility.

Narendra Modi on Monday sought to review the payments method of oil imports to producers like Saudi Arabia, while also warning that high crude oil prices were hurting the global economy. News agency PTI reported that the prime minister also asked why there were new investments in oil and gas exploration despite the government facilitating a conducive environment.

Also Read
Indian economy to be hit by global growth slowdown; govt likely to meet annual fiscal deficit target
India may overtake Germany, Japan too after beating UK; to become world’s third largest economy
No FTA with Israel until we get a good deal: Piyush Goyal
E-way bills at all-time high in August

Modi also requested oil-producing countries to review the payments system of oil imports so that there could be some temporary relief to the Indian rupee. The rupee has fallen nearly 16% since the beginning of the year due to a mix of factors including crude oil prices. Presently, due to Iran sanctions, India has placed higher crude oil order with Saudi Arabia to offset fall in imports.

Responding to Modi’s requests, Saudi Arabia Oil Minister Khalid A Al-Falih agreed that there indeed was consumer pain due to higher oil prices; however, the pain would have been higher had Saudi Arabia not invested in creating spare capacity. Saudi Arabia also expressed its desire to invest in India in fuel retail and crude storage segments to strengthen the partnership.

British Petroleum CEO Bob Dudley, who was also present at the meeting, said on the sidelines of an event that his company curtailed investment in the country due to high natural gas prices. Bob Dudley did not support the idea of controlling fuel prices a sit would hurt oil companies. Bob Dudley predicted that oil prices will change over the next 45 days due to geopolitical reasons.