Niti Aayog had been asked by the Prime Minister’s Office (PMO) to prepare a plan to incentivise Indian manufacturers of protective gears and lightweight body armours. 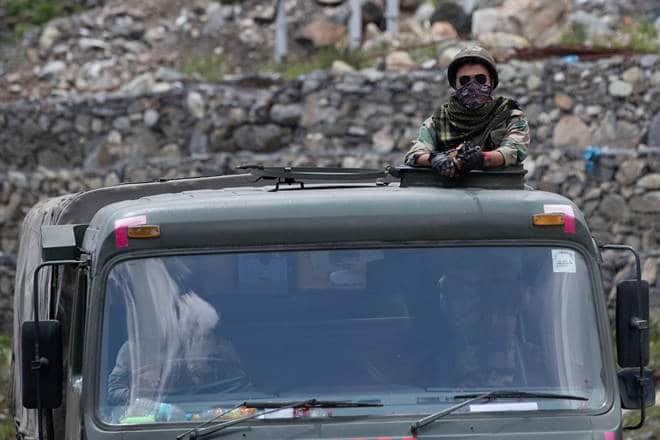 An Indian army soldier guards atop one of the vehicles as an army convoy moves on the Srinagar- Ladakh highway at Gagangeer, north-east of Srinagar, India, Wednesday, June 17, 2020. Indian security forces said neither side fired any shots in the clash in the Ladakh region late Monday that was the first deadly confrontation on the disputed border between India and China since 1975. China said Wednesday that it is seeking a peaceful resolution to its Himalayan border dispute with India following the death of 20 Indian soldiers in the most violent confrontation in decades. (AP Photo/Mukhtar Khan)

Indian companies manufacturing bulletproof jackets for the Indian Army personnel should avoid importing the raw materials required for the jackets from China due to the “inconsistencies in the quality” of the materials, Niti Aayog member VK Saraswat said on Monday.

The remark made by Saraswat, a former Defence Research and Development Organisation (DRDO) chief, gains significance in the light of the growing anti-China sentiments in the country and the clamour to boycott Chinese goods after the clash between Indian and Chinese troops in the Galwan Valley of Ladakh last week.

Saraswat was also quoted by PTI as saying that the companies procuring raw materials from China for manufacturing bulletproof jackets can also procure the materials from sources that are the original equipment manufacturer (OEM) production agencies.

Also Read
Russia completes the assembly of reactor vessel for Kudankulam nuclear power plant
US offers critical technologies to India under iCET
New logo of G20 unveiled for 2023 – Know all about the Symbol of Hope
Exclusive: Boost for Haryana, road shows next month to showcase Integrated Aviation Hub

The Niti Aayog member told PTI that many times the raw materials imported from China for manufacturing bulletproof jackets are not of good quality and Indian manufacturers should avoid importing from these sources due to the inconsistencies in the quality of the shipments.

Niti Aayog had been asked by the Prime Minister’s Office (PMO) to prepare a plan to incentivise Indian manufacturers of protective gears and lightweight body armours. The quality norms for body armours to be used by the Indian Armed Forces have also been finalised by the Bureau of Indian Standards, the report added.

As much as possible, indigenous materials should be used, and when not possible – import from China must be avoided, the eminent scientist informed about the recommendations made by the committee.

As per government projections, the Indian Armed Forces will require over 3 lakh bulletproof jackets. The raw material for manufacturing these jackets was earlier procured from Europe and the US, but the Indian manufacturers switched to Chinese suppliers due to their lower prices.

If helmets and lightweight bullet-proof vests are produced within India, it will put an end to the long wait for supply from foreign manufacturers and also prove to be cost-effective, the report stated.

The PTI quoted sources as saying that the government has asked the industry to provide details of the cheap imports, and the tax advantage and comparison with domestic prices to boost domestic manufacturing and to curb the import of shipments from China.

Sources told PTI that at a recent meeting in the Prime Minister’s office discussions were held to find ways to promote ‘Atma Nirbhar Bharat’ (self-reliant India), including cuts in import dependence from China.

Twenty Indian troops lost their lives in a violent face-off in the Galwan Valley of Ladakh on the night of June 15/16. It was the biggest confrontation between Indian and Chinese militaries since clashes in Nathu La in 1967 when India lost around 80 soldiers while the death toll on the Chinese side was over 300.