The Prime Ministers Economic Advisory Council (EAC) is set to upwardly revise its projection for economic growth by close to half a percentage point from 8.2% in its February review in the economic outlook for the current financial year to be released on Friday. It would also predict a rebound of the aggregate investment rate to over 38% of GDP by the next financial year, thanks to a sharp uptake in private investments since last March, said an official source.

An investment rate close to 38% of GDP is what India had achieved in 2007-08, at the height of the boom before the global financial crisis set in. After the crisis, the rate fell to about 33% in 2008-09, which saw the worst effect of the global financial meltdown and a consequent draw-down of inventories. It is now coming back to its earlier peak, signifying the return of a sustainable investment-led growth story that relies less on public investment.

A sharp upswing in capital goods production since March validates EACs projection. The return of private investment in India is in sharp contrast to the situation in western economies where government stimulus is enabling a fragile recovery.

Apart from the pick-up in private investment, EACs upward revision of growth rate is also based on better-than-expected growth in exports, over 10% growth in manufacturing and service sectors and robustness in the agriculture sector triggered by good monsoon rains. 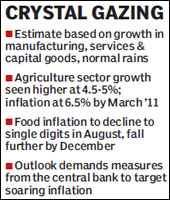 While EACs February review took into account an agricultural growth of 4% for the current year in light of the normal monsoon, its economic outlook upwardly revises the agricultural output expansion to 4.5-5%. High farm sector growth will be giving a push to the expansion of non-farm activity up to a point.

The EAC economic outlook that does not predict inflation figures for the end of the calendar year would forecast that headline inflation would be 6.5% by March 2011. Food inflation would fall to single digits in August 2010, and would be substantially lower in December. While food prices have plateaued in the last six months, core inflation which is driven by the demand in the economy is a matter of concern especially in the backdrop of the strong recovery that the Indian economy has been making since the summer of 2009, the source says.

Strengthening the case for an accelerated pace in the normalisation of monetary policy, the outlook also demands measures from the central bank to target soaring inflation which poses a key risk to the growth projection.

The EACs latest growth prediction is way below the 9.4% projected by the International Monetary Fund while it is more optimistic than the 8.5% growth that the finance minister Pranab Mukherjee expects. On Tuesday, the Asian Development bank projected an 8.2% growth for Asias third-largest economy after Japan and China in the current fiscal year. The EAC is of the view that growth figures projected by the IMF is a bit too optimistic and we have taken a cautious and conservative approach, said an official source.

Manufacturing output which has seen a very sharp pick-up may not sustain the momentum for the rest of the year, as the inventory building up in the economy runs out of steam. While the council does not see any major risk to Indian exports from the sovereign debt crisis in the euro zone, it does acknowledge that the crisis throws up some fundamental questions which need to be addressed over a period of time. If there is any impact from the the euro zone crisis on Indian exports, it will be visible only in the quarter ending December, agrees Jehangir Aziz of JPMorgan Chase.