Are we being choked by our own garbage? Check out the frightening prospects

Few people realise how close we are to being choked by our own garbage! The generation of garbage in our cities has been growing and the projections in the years ahead are frightening. 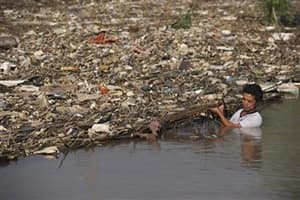 The garbage came from different branches and upstream parts of the river, according to a report. The local environment protection bureau had organised cleaners to ensure cleaner water and safer navigation. (Reuters)

Few people realise how close we are to being choked by our own garbage! The generation of garbage in our cities has been growing and the projections in the years ahead are frightening. Delhi, for example, generates close to 9,000 tonnes of garbage per day, and does not have the capacity to handle this waste scientifically and safely. Ideally, municipal solid waste should be segregated into wet waste (biodegradable, i.e., kitchen waste), dry waste (such as paper, plastic, glass, metal, etc, some of which is recyclable), and hazardous waste which needs separate treatment. If this were done, the wet waste can be processed into compostable products, the recyclable material can be picked by ragpickers and sent for recycling, and the irreducible minimum waste can be sent to scientifically-engineered landfills. We are very far from this ideal. You only need to take a drive down Pankha road, the six-lane, arterial road to Janakpuri in West Delhi, to see thousands of tonnes of mixed unsegregated garbage thrown into what must be a storm-water drain, stretching over a few hundred metres along this road. This municipal solid waste (MSW) has been thrown there illegally. Let us hope the National Green Tribunal takes note.

The garbage menace in urban India is not limited to what meets the eye, i.e., bulging community bins, rubbish piled on street corners, sometimes left for days in open spaces to rot and pollute, and garbage strewn over storm-water drains. Some cities, in some parts of the country, have partially implemented door-to-door collection with the help of resident welfare associations and outsourcing to private agencies to take the waste to community bins. More generally, the waste is dumped unsegregated into community bins. It is then collected from these bins and slowly finds its way through transportation over long distances to its final destination, the so-called landfills which are actually “land hills” of rubbish. These dumpsites were originally located outside of the cities and towns, but with cities pushing their peripheries, the land hills of garbage have moved closer, and so has the danger to our health.

Garbage left rotting in the open breeds germs, and germs are not deterred by the boundary walls of our homes. The lack of adequate realisation on the part of Indian city-dwellers of the public health consequences of deteriorating management of municipal solid waste is hard to comprehend. One major change compared with 2010, when I first started writing these columns, is that there is much more reporting in the press of the mess that we have made of our cities (goo.gl/ix6ZPi).

India’s urban population of 377 million generates an estimated 62 million tonnes of MSW per year, based on the assumption that 450 g of solid waste is generated on average by an urban person per day. Bigger and richer cities produce more waste than smaller ones. Of the total MSW, about 80% is “collected” from the community bins, of which 25% or so is processed and treated, and the rest is simply dumped at the disposal sites without any scientific treatment. About half of MSW is wet waste, another 18% is dry waste, and 30-35% is inert and debris.

Plastic waste has been increasing at the rate of 2.5 times the GDP growth and it is projected to increase at a faster pace with its increased use for packaging, shopping bags, industrial products and building materials. About 70% of the plastic packaging products turn into plastic waste within a short period (CPCB 2015), and the recycling and disposal of plastic poses a huge challenge.

Official projections suggest that with faster growth and rapid urbanisation, our cities will be generating municipal solid waste of the order of 160-165 million tonnes, i.e., more than two-and-half times the present level by 2030. Management of such a large volume of waste with its changing composition will require a scientific approach and not business as usual. Reduction, reuse, recycling, recovery and scientific disposal will have to be at the centre of a new strategy of solid waste management.

When we are made aware of the problem, we get distracted into apportioning blame rather than exploring solutions based on what has worked in some other Indian city and how it can be adapted or replicated elsewhere. With politicians and bureaucrats as easy natural targets, we forget that the problem is as much due to the lack of civic sense in our own habits. We do not segregate waste at home, mixing our kitchen waste with discarded paper, plastic, glass and whatever else, including old batteries; this makes the task of managing this mixed waste that much more challenging for the municipal government.

Some of the best practices in municipal solid waste management, e.g., in Rajkot, Pammal, and Pune were reported earlier in these columns. All these cities focussed on reducing waste, and on segregation of wet waste (biodegradable waste such as kitchen waste) from dry waste at source. They also resorted to resource recovery through composting and or biomethanation. The Centre for Science and Environment, in its recent research-based publication, Not in my Backyard, provides a wealth of information on the potential for transformation in this sector. Segregation of waste at source, recycling by involving the informal sector, decentralised processing for resource recovery through composting and biomethanation, and landfills as repositories of last resort emerge as important components of possible solutions in their analysis.

JNNURM, a national urban renewal programme (2005-2014) had focussed the mind of urban planners and managers to begin to get their act together in improving the state of service delivery including solid waste management. The successor programs like Swacch Bharat and AMRUT launched in 2014 are taking this forward by addressing the challenge of water and sanitation. In order to succeed, the successor programs must learn from the experience of JNNURM, e.g., why it was that out of 42 projects sanctioned for solid waste management, only 12 were completed.

While our next column will address these issues in a forward looking context of how Swacch Bharat and AMRUT should move forward, it is important to take note of a very significant positive development in April 2016 when the Solid Waste Management Rules of 2000 were revised. If properly implemented, the new SWM Rules will definitely put us on the right track. They make it mandatory for local authorities to arrange door to door collection of segregated solid waste distinguishing wet waste, dry waste and hazardous waste. The authority must prescribe a user-fee to be paid by the waste generator and arrange for the collection of the waste and its transport to a centre where the waste can be distributed to different processing streams. This would greatly reduce the residual waste that must be sent to the landfills. So far so good, but the challenge lies in getting these rules implemented. Perhaps as a first step all state capitals plus the 100 smart cities should be tasked to chalk out a comprehensive plan for waste management taking account of the increase in waste that is expected. These plans should be finalised within one year and then monitored carefully to serve as best practice examples for the rest of the country to follow. Since behaviour change at the household level is crucial to achieve segregation at source, active involvement of NGOs and resident welfare associations is critical.