Abhaneri: The structure of the pavilions had been designed in such a manner that in its heyday there would have been a magnificent play of light and shade from reflections in the shimmering waters of the pool for those viewing from the rooms inside. 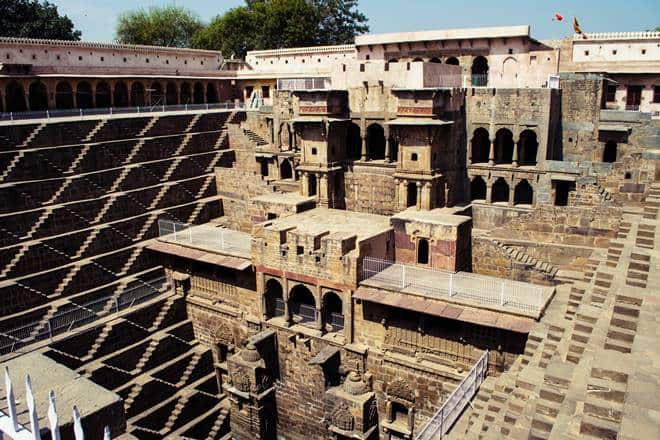 Named after a local 8th century CE Rajput ruler King Chanda, the imposing square shaped baori measures 35 meter on each side, and is around 19 meter in depth.

Abhaneri, a small village located near Jaipur in Rajasthan, is famous for its exquisite 1,200 year old step-well known as the Chand baori. This baori or step-well, which is considered as the deepest step well in the world, is located opposite to a partially ruined temple known as the Harshat Mata mandir. Named after a local 8th century CE Rajput ruler King Chanda, the imposing square shaped baori measures 35 meter on each side, and is around 19 meter in depth. There are double flights of 3,500 stairs on ten landings on three sides of the well, which run parallel to the baori rim. These stairs are perfectly proportioned in a way that they form stair-triangles along a very sharp descent. The walls of this baori are so steep that when one looks down from the top edge the stair-triangles alternately hide and show the people going down. The fourth wall of the baori has a multi- storied corridor with pillars and two projecting niches that have two beautiful murtis of Ganesha and Mahisasuramardini in them. There is a small room inside the corridor known as the Andheri-Ujala.

The baori has a high wall running around it with a pillared corridor attached to it, which now houses various broken sculptures. Unlike other step-wells, Chand baori was renovated and portions added at a later period. The lower part of the fourth wall with its exquisitely carved pillars, pavilions, and shrines, were built by the Rajput rulers in the 8th century CE, when the baori functioned as a community well.

The upper part of the same wall was added much later in the 18th century CE, when the Mughals created a palace like structure with arches and a four-sided gallery. These additions closed off the pool making it a private part of the palace and gallery, with a superb view of the waters from its terraces. The structure of the pavilions had been designed in such a manner that in its heyday there would have been a magnificent play of light and shade from reflections in the shimmering waters of the pool for those viewing from the rooms inside. Now of course, the entire baori is cordoned off by railings at the rim to avoid fatal accidents, as the fall from top is sharp.

Just outside the Chand baori is the ruined and later partially renovated temple of Harshad mata. It is believed that the step-well was originally attached to the temple as the temple-kund, where devotees would wash their hands and feet before entering the mandapa. Harshat Mata was considered as the deity of happiness, who spread the glow (abha) of joy in the surrounding village. It is for this reason the village was named Abhanagri (glowing city), which has now morphed into Abhaneri.

The temple was completely destroyed to the plinth, during the 10th century CE invasion by Mahmud of Ghazni. Broken parts still remain scattered around the temple, while some are housed inside the corridor around the walled baori. Later the temple was renovated to make a basic functional structure, which now holds a murti of the devi Durga.

How to go: Abhaneri is around 90 km from Jaipur and makes for a perfect day trip from the city. It is also the perfect weekend getaway for the Delhi/NCR people who can club Jaipur and Bhangarh in this trip. The best time to visit the place would be during the cooler months of October to February.