Salma Dam inaugurated by PM Modi; one of India’s most expensive infrastructure projects in Afghanistan 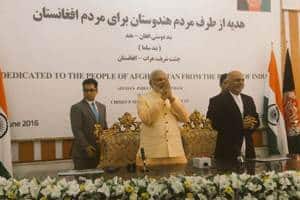 Prime Minister Narendra Modi on Saturday jointly inaugurated the Salma Dam (Herat Dam) along with Afghanistan President Ashraf Ghani. The Salma Dam, also known as the Afghan-India Friendship Dam, has been built by WAPCOS, an Indian “mini-ratna I”.

Situated on the upper reaches of Hari Rud River in Herat province, Salma Dam project involved construction of a 107.5 meter high earth and rock–fill dam and a 42 MW power house with three units of 14 MW each. It also has a provision for releasing water for irrigation of 75,000 hectares of land.

At over $275 million, this is the most expensive of India’s infrastructure projects in the region.

The availability of power and water through the project will lead to the overall economic development of the western region of Afghanistan. It will address the energy requirements and irrigation needs of western Afghanistan.

The project is located 165 km east of Herat town and connected with earthen road. Due to security reasons Indian engineers and technicians involved with the project have been reaching the site once in a month by helicopter service provided by Government of Afghanistan.