Written by Ronojoy Banerjee | Ronojoy Banerjee | New Delhi | Updated: Oct 7 2010, 10:45am hrs
Mahindra & Mahindra (M&M), the countrys largest utility vehicles manufacturer, is planning to launch a sub-100 cc motorcycle. The bike, which will be the first of its kind in India, will help company carve out a niche of its own in the highly competitive motorcycle market in India.

Currently, there are three segments in the domestic motorcycle industry: economy, executive and premium. Over half of all bike sales happen in the 125cc-150cc segment, while the 100-125 cc contributes 20%. Analysts feel Mahindra could be attempting to create a new segment for itself with the sub-100 cc motorcycle.

M&M secured a beachhead in the burgeoning two-wheeler segment two years back when it acquired the operating assets of Kinetic Motors for Rs 110 crore. The M&M subsidiary Mahindra 2 Wheelers makes scooters including the Flyte and Rodeo. On September 30, it entered the motorcycle segment with the 107cc Stallio and unveiled its 300cc cruiser bike Mojo. In September, Mahindra 2 Wheelers sold 16,569 scooters.

Our market research told us that low-cost bikes is an area where we need to work upon...We have started preliminary work, an executive privy to the plan told FE. However, he declined to give detailed specifications of the product, which is still in development stages. A company spokesperson declined to comment. 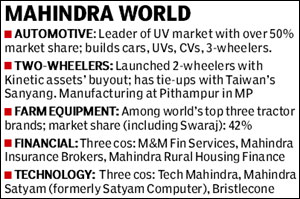 Leader of automotive practice at PricewaterhouseCoopers Abdul Majeed said that M&Ms proposed low-cost bike could create a segment of its own. The competition is so intense that if a company is working on something different, it would create excitement. This segment has not been explored, but it certainly has good potential, he said.

Outlining the detailed two-wheeler strategy of the company, an executive said that going forward, a substantial chunk of Mahindra 2 Wheelers revenues will come from the motorcycle segment. We would be aligning ourselves to mirror the two-wheeler market, he said.

It was not an impulse to enter the two-wheeler segment. The decision was taken only after a strategic understanding of the market, he added.

At the launch of the Stallio and Mojo motorcycles, Anand Mahindra, vice-chairman and managing director, Mahindra Group had said: In the last 12 months, Mahindra 2 Wheelers has achieved a milestone by registering a sale of 1.5 lakh unitsa clear validation of the success of our niche PowerScooters strategy. M&M had said that the new motorcycles are part of the companys commitment to establish a robust, end-to-end two wheeler business in every segment of the industry.

Mahindra already has products across the automobile spectrum. It is present in commercial vehicles, sedans, utility vehicles, two-wheelers, and electric cars. The group strengthened its IT arm with the acquisition of Satyam Computer Services, which was later renamed as Mahindra Satyam.