Indian productivity ahead of China

Written by Sunil Jain | New Delhi | Updated: Jan 25 2011, 09:20am hrs
Though China's productivity, at about twice India's in the last three decades, has really driven its growth story (along with higher capital investments), the wheel could soon be turning. Not only have India's capital investments started rising dramatically, there has even been a surge in productivity, to levels higher than those in China. Not surprisingly, a large part of this has been driven by today's high-growth sectors of telecom, banking and insurance telecom productivity grew 17% while that in banking and insurance grew 12% per annum in recent years. 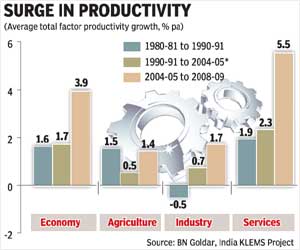 Achieving a 10% GDP growth, however, will require several policy changes. Simply expecting the current spurt in productivity to continue, along with the higher levels of capital investments, is unlikely to hold true in the long run. These were the initial findings of the first India KLEMS research project at ICRIER in collaboration with Groningen Growth and Development Centre, University of Groningen, The Netherlands the project is being supported by RBI and aims to construct internationally comparable data covering the entire Indian economy.

During 1978-93, Indian productivity grew a little over 1% per annum compared to China's 3.5%; and while India's productivity rose to 2.3% per annum in 1993-2004 as compared to China's 4%, things have turned around according to BN Goldar, Research Advisor to the KLEMS project. According to Goldar, between 2004-05 and 2008-09, India's productivity has grown 3.9% per annum (5% per annum between 2004-05 and 2007-08) while that in China is reported to be around 3% or less. Sustaining this growth in productivity over long periods of time, however, is not going to be easy unless the manufacturing sector chips in (see graph for difference in industry and services). In the manufacturing sector, however, disaggregated information till 2003-04 (by Deb Kusum Das, Abdul Azeez Erumban and Suresh Agarwala) show productivity actually fell in the 1997-2004 period.

Communication and banking/insurance could provide an equal amount. All of this, Ficci Director General (former ICRIER director and chief executive) Rajiv Kumar pointed out, required the next generation of reforms reforms that allowed firms to close down, for instance, and various others highlighted in the World Bank's Doing Business series which would allow capital and other resources to move across to more efficient sectors.

Goldar pointed to the differences in inter-plant efficiency levels in even the organised manufacturing sector.