Not surprisingly, given its earlier conversations, including the Macroeconomic and Monetary Developments First Quarter Review released on Monday and the statement on Tuesday, RBI has chosen not to cut policy rates. The 1% cut in SLR, a surprise, is supposed to create more liquidity to lend to the private sector, but given SLR investments are running at 29% as compared to the 24% pre-cut requirement, it may not amount to much. The highlight of the Tuesday statement was RBI cutting its FY13 GDP forecast to 6.5% from 7.3% earlier, and hiking the inflation forecast to 7% from 6.5% earlier.

It is true, as this column has argued before (Inflations pulse, FE, June 19, http://goo.gl/1rNNH), there is little RBI can do to control food inflation which is the biggest driver of inflation over the last few years, and that core inflation, which is the only thing monetary policy can possibly influence, has been falling steadily, to below 5% right now. But the reason why RBI continues to focus on WPI and even the CPI instead of core inflationit has shuffled from one to the other on different occasionsis because of embedded inflation expectations.

Never mind if monetary policy cant influence overall WPI, RBIs old argument goes, if workers feel WPI is going to keep rising, they will build this into their wage negotiations and demand higher wages which, in turn, will drive up the WPI which will further fuel expectations causing the workers to demand higher wages which you get the picture The classic wage-price spiral which, RBI says, may not be sustainable as the real wage growth will be higher than productivity growth. Similarly, if producers see sustained inflation, theyll build this into their contracts which will further push WPI which will further build up expectations which will Given this self-perpetuating death cycle, even if interest rates are killing, it makes sense to nip inflation in the budCMIEs Prowess data shows interest-to-PBDIT has risen from 23.3% in March 2010 to 43.1% for the food industry and from 28.9% to 40.1% for hotels, suggesting that there are as many sectors for which interest rates are the killer as those for which the famed policy paralysis is the killer. But in the face of an inflation spiral, its probably a good idea not to harp on this. 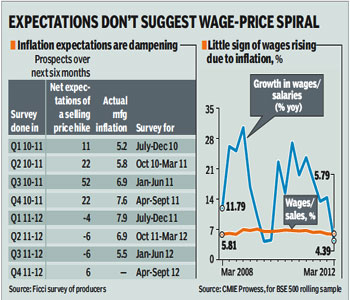 Problem is the data doesnt quite show the wage-price spiral, though RBI has two charts in its pre-policy report that show this. RBI has a chart on rural wages for unskilled male workers from April 2009 to April 2012 that is seriously frightening since it shows a steady wage growth of around 20% y-o-y in this period, most of which was a high-inflation periodgiven inflation in this period, RBI says this has meant real wage growth of 10% in April 2009 falling to 1% y-o-y in December 2009, rising to around 13% in October 2010, falling and then rising to 13% again in December 2011 and then falling again to around 10% in April 2012. Though even this chart doesnt quite show the spiral RBI fears, the data doesnt look kosher. While RBI based this on the Labour Bureaus surveys, the data is at variance with what the NSS shows. Admittedly, NSS data is for 2004-05 to 2007-08, but it shows just a 13% nominal annual growth for rural labour and 12% for urban labour, nowhere near the 10-12% real wage hikes RBI talks ofIndia would have no poverty if we had such wage hikes! Logically, since the bulk of GDP comprises wages, a slowing GDP should also mean real wage growth has fallen dramatically in recent years, implying inflationary expectations havent quite got embedded. When high inflation and high growth combine, embedding is more likely as compared to a situation in which high inflation combines with low, and falling, growth.

But since, to be fair, the NSS and Labour Bureau are for different periodsand the Labour Bureau data would have been influenced by the spread of MGNREGA which happened in the period the NSS didnt captureits a good idea to look at other data. If theres one set of workers who have the clout to demand higher wages to cause the classic wage-price spiral, its those working in big companies. RBI too has data on this, and it shows staff costs in the corporate sector as growing at around 16% y-o-y in Q1FY11, rising to just short of 22% in Q2 and then trending downwards to a still high 15%. Look at CMIEs Prowess, perhaps the best dataset when it comes to corporate data, and the results look quite different.

If you look at a common sample of companies in the BSE 500, you find quarterly wages and salaries have no particular trend, in the sense they grew 11.8% y-o-y in the March 2008 quarter, this rose to 26.1% in the June 2008 quarter and all the way up to 30.5% in the December 2008 quarter; growth then fell to 16.8% in the March 2009 quarter and kept falling to 4.2% in the September 2009 quarter before rising to 22.6% in the March 2010 quarter. It rose and it fell, but the short point is that, with a hike of just 4.4% in the March 2012 quarter (see graph), there is no sign of any wage-inflation spiral. And when you look at wages as a share of sales, which is actually the correct thing to do since this tells you whether the wage hike is out of proportion to productivity, this is a flat 6-6.5% for the last four years. Take a smaller sample of the top 75 firms and this is an even lower 4-5%, not surprisingly since the top firms are more efficient than the others.

Whichever way you look at it, there doesnt seem much evidence of inflationary expectations getting embedded into the psyches of market participants. Pity RBI doesnt see this.