A year on, govt ignores SC order on telecom licensing

Written by Sunil Jain | New Delhi | Updated: Mar 4 2011, 08:31am hrs
While government ponders over what to do with the Raja licensees, a fact that has escaped attention is that the courts have ruled the licensing procedure illegal, and more than a year ago. 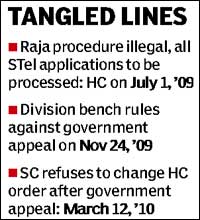 What is more important, however, is what various courts have ruled on the matter so far. STel had applied for 6 licences before September 26, 2007 and for 16 licences after this but before October 1, 2007. STel went to the High Court saying the government could not advance the cut-off date from October 1 to September 26, and asked that the press release which announced this decision be quashed. On July 1, 2009, the court ruled the impugned press release dated 10.1.2008 is quashed. It also directed the government to consider the 16 other STel applications made for granting licences.

Since this would have meant the government would have to consider all 575 applications and not just the ones that came before September 26, the government appealed this in the division bench and this time fielded attorney general GE Vahanvati since it was Vahanvati who cleared the press release in the first place.

Annexure 47 of the Justice Patil report shows that A Raja asked his staffers to show the press release to Vahanvati and on January 7, 2008 Vahanvati cleared the press release saying I have seen the note. The issue regarding new LOIs are not before any court. What is proposed is fair and reasonable. The press release makes for transparency. This seems to be in order.

On November 24, 2009, the division bench rejected Vahanvati's plea, and to show its displeasure over the government's appeal, the court added: The appeal is dismissed with costs of Rs 20,000 which will be paid by the appellant (government) to the Respondent (STel) within four weeks.

On March 12, 2010, when Vahanvati appealed on behalf of the government in the Supreme Court, the Court also dismissed the case an arm-twisted STel had told the Court it never wanted its 16 licences while saying: However, we make it clear that the findings recorded by the High Court with regard to the cut-off date is not interfered with and disturbed by this Court in the present case.