It would be irrational to expect all the countries to reach net zero by 2050/2060 given the fact that they are at different points of economic development, with large chunks of their populations not having access to basic energy needs 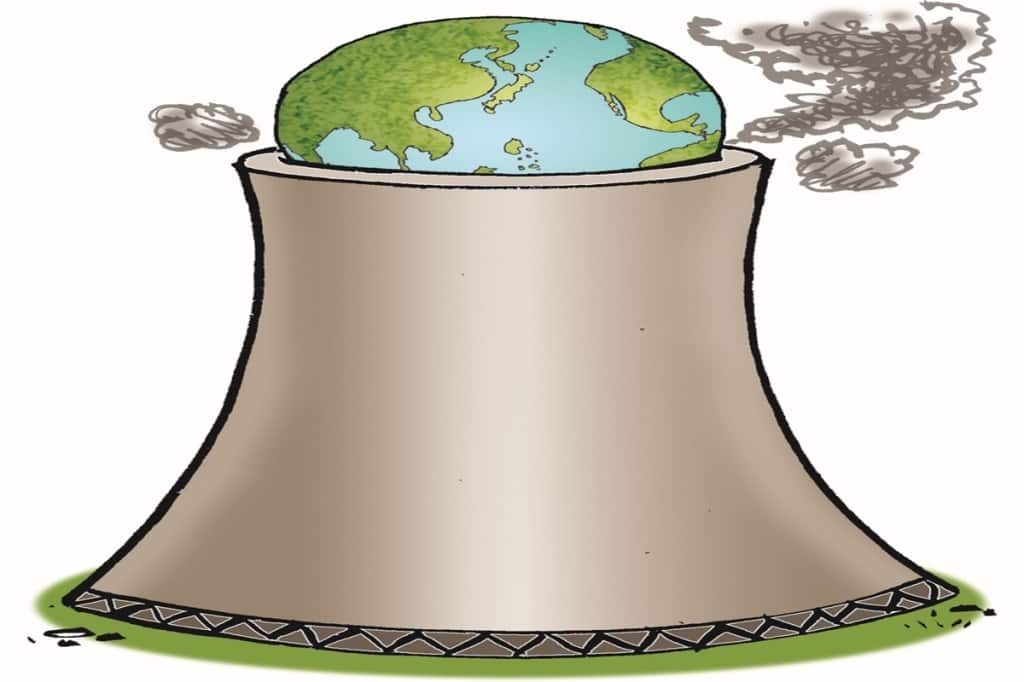 We have to reduce our dependence on fossil fuels, and need to concentrate on our renewable capacity addition targets and ensure these targets are actually met

When it comes to global warming, it is not just carbon dioxide (CO2) that we talk about, but we also include other greenhouse gases (GHGs) such as methane, nitrous oxide and a few fluorinated gases. If we add up all GHGs in terms of their potential to make the planet warmer, no doubt CO2 is the most dominant, estimated at about 76%. While CO2 can remain in the atmosphere for hundreds of years, the lifespan of gases such as methane is about 12 years and that of nitrous oxide is about 114 years. Fluorinated gases can survive for more than 250 years in the atmosphere.

Since the CO2 is the most dominant, when we speak of climate change issues, we tend to speak of CO2 only. Besides, the estimates of CO2 are more accurate and up to date when compared to other GHGs. The International Energy Agency (IEA) maintains detailed data on CO2 emissions on a countrywide/sector basis which are reasonably up to date as figures for 2019 for most countries are already available on their website. According to the IEA, the G20 countries collectively accounted for 85% of the CO2 emissions for 2019, and this figure was actually about 92% in 1990. If we look at individual country CO2 emissions for 2019 (2018 for some countries since 2019 was not available), it ranged from 171 MTCO2e (Argentina) to 9,802 MTCO2e (China). There are only five countries whose yearly CO2 emissions are more than 1,000 MTCO2e, and these are China (9,802), the USA (4,766), India (2,309), Russia (1,587) and Japan (1,066). These five countries account for almost 70% of the emissions from G20 countries, and about 58% of the world’s emissions.

Much of the climate change debate, however, is about which parameter to use—the absolute emissions or per capita emissions, since it has different implications for different countries. In terms of per capita, amongst the G20 countries, Australia and Canada emerge as the countries with the highest figure (about 15.3 tCO2), whereas India has the lowest per capita emission (1.7 tCO2). With a per capita world average of 4.4 tCO2, there are only five G20 countries whose emissions are less than this (Argentina, Brazil, India, Indonesia and Mexico).

How serious a country is about its carbon emissions can be judged by what are the targets it has kept for itself in its Nationally Determined Contributions (NDCs). The NDCs were to be filed by all countries who are party to the Paris Agreement of 2015 which would cite the steps the country proposes to take to tackle global warming. The NDCs are also supposed to be revised every five years, bringing in stiffer targets. While about 191 NDCs were filed after the Paris Agreement, the next round was due in 2020 but has gotten delayed because of the pandemic. It would be interesting to note that only eight countries have filed their second NDCs and the only G20 country to have done so is Argentina. The other countries that have filed are Grenada, Marshall Islands, Nepal, Papua New Guinea, Suriname, Tonga and the UAE.

Many of the G20 countries, however, have filed what is termed as an updated version of the first NDC. What is the difference between the updated version of the first NDC and the second NDC is not clarified by the UNFCCC, the UN entity created to monitor climate change. A quick reading of the updated version of the NDCs does not really inspire confidence as to whether we are really serious about global warming. While some countries/regions have introduced stiffer targets (like Brazil, the EU and the UK), many others have made no changes in their targets (like Australia, Japan, Mexico, Canada and Russia). The remaining G20 countries have not even made any fresh NDC document till now, which includes China, the US and India.

The latest buzzword for climate change issues is ‘net zero’. Simply put, it means that whatever carbon footprints that one is putting into the atmosphere is being neutralised by carbon sinks which absorb CO2 (the example being afforestation) or being sucked out and stored (the example being the carbon capture, utilisation and storage technology, or CCUS). Several G20 countries have announced their intention to turn net zero by 2050/2060. While some have already passed laws to this effect (like the UK and France), there are others who have proposed legislations (like the EU, Canada and South Korea). Then there are others who have quoted about their desire to turn net zero by 2050/2060 in some policy document (like China, Germany, Japan and the US), and finally there are the ones who have not yet given any indication of turning net zero (India being one such example).

The race to net zero by 2050/2060 has put a lot of pressure on India to declare similar ambitions. There are, of course, differing views on this. Some feel that it would be impossible for India to turn net zero by 2050/2060, whereas some others feel that it is at least technically feasible. While no judgement is being passed whether India can do it or not, some facts need to be highlighted. First, before turning net zero, one has to reach the peak emission level, and many of the G20 countries (13 of them) reached their peak long back (ranging from 1990 to 2017). G20 countries that are yet to peak include India, China, Australia, Indonesia and Mexico. South Korea peaked in 2018 and, hence, it is too early to say anything. Second, just because several countries have declared their ambition of turning net zero does not mean that they are well on their way to achieve this. The fact is that the NDCs which exist as on date clearly fall short of all that is required to be done to turn net zero. In fact, it is said that, barring India, all the other NDCs are not even 2-degree-Celsius-compliant, what to talk of 1.5-degree Celsius.

To conclude, it would be irrational to expect all the countries to reach net zero level of emissions by 2050/2060 given the fact that they are at different points of economic development with a large population not having access to basic energy needs. This is not to suggest that countries like India should do nothing. We have to keep striving on how to reduce our dependence on fossil fuels and work on other areas like reducing our energy intensity and explore possibilities of adopting storage technology and material reuse. We would also need to concentrate on our renewable capacity addition targets and ensure that these targets are actually met. It is no secret that we appear to be slipping in meeting our target of having a renewable capacity of 175 GW by 2022.

Follow us on
Latest News
CPSE capex at Rs 2.85 trn in first half
Sahyadri FPC gets private APMC licence
Wipro launches new financial services consulting capability in India
Bancassurance contributes 40% to ICICI Pru retail business in H1
JSW Energy ahead of schedule to achieve 10 GW of installed capacity: Prashant Jain
US Federal Reserve unleashes another big rate hike but hints at a pullback
Here’s why cash flow and contribution margin are important parameters for new-age tech companies like Paytm
Photos
Heart-wrenching! Here is a look at Morbi and the suspension bridge that collapsed
2 days agoOctober 31, 2022
In Pictures: PM Modi in Kargil to celebrate Diwali with soldiers, says, ‘All of you have been my family for years now’
1 week agoOctober 24, 2022
In Pictures: PM Modi inaugurates Deepotsav in Ayodhya; World record set by lighting of over 15 lakh diyas
1 week agoOctober 24, 2022
Read More
×
Premium
One Bill to rule them all?
Voting for extremists
A shot at green leadership
A colossal tragedy
Premium
Is the rupee decline ending?
The over-the-top debate ends here