Kusum Sarovar, which means a lake of flowers, is also known as Sumana Sarovar. It is believed that long back a beautiful forest once ran all around the kund, which was filled with sweet smelling flowering trees. 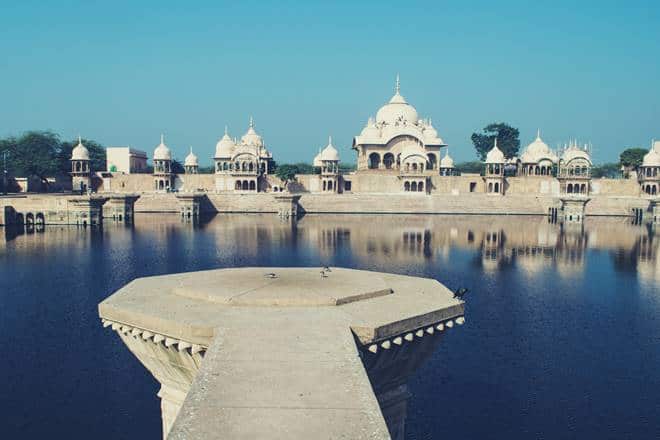 Standing near the two well known pilgrimage towns of Mathura and Vrindavan, this place is located on the holy Govardhana hill that is famously associated with Sri Krishna.

Among the lesser known historical monuments in the state of Uttar Pradesh are a group of 18th century memorial chattris or cenotaphs with a pretty water-body or kund in the foreground, known as Kusum Sarovar. Standing near the two well known pilgrimage towns of Mathura and Vrindavan, this place is located on the holy Govardhana hill that is famously associated with Sri Krishna. Near this group of monuments also stand the Radha kund and Narada Kund, the latter being the place where it is believed that Bhakti Sutra was written by Narada.

The recently renovated Kusum Sarovar group of chattris was built as a memorial for Maharaja Suraj Mal and his wife Kishori Rani in 1764 by his son Maharaja Jawahar Singh, the Jat ruler of Bharatpur, who reigned the region from 1707 to 1763. The central structure of the memorial is a large square with a high stone terrace, prettily carved domed bastions at corners, and lateral bays. The main chattris are built at the centre of a raised, ornamented high platform with two staircases to reach the top.

Maharaja Suraj Mal, in whose name the chattris were built, was the famous Jat king who had successfully defeated the Mughal army stationed at Agra, causing much damage thereafter. According to some historians, Suraj Mal was later killed in Delhi in 1763 in a Mughal ambush, somewhere near the Hindon River. Later during the colonial era, members from this dynasty died while fighting against the British.

The pretty kund that stands in front of the famous Jat king’s chattris also has an interesting history. The name of this kund is supposedly derived from an episode in the Kilakinchita Lila, where it speaks of Radha and the gopis gathering flowers to offer to Surya in a closely situated Surya Temple. It was on the banks of this sarovar that they would regularly meet Krishna and his friend Madhumangala.

Kusum Sarovar, which means a lake of flowers, is also known as Sumana Sarovar. It is believed that long back a beautiful forest once ran all around the kund, which was filled with sweet smelling flowering trees such as mallika, chameli, juhi, champaka, bel, among many others. Set beautifully against the exotic sandstone memorial chattris, the 60 feet deep sarovar also holds a replica of Radha and Krishna’s feet in a separate monument. The chattri ceilings hold remnants of beautiful frescoes that depict scenes from various Krishna-gopi leelas.

According to folklore, Muni Ashtavakra had once performed penance on the banks of Kusum Sarovar for a darshan of Sri Radha-Krishna. Chaitanya Mahaprabhu is also believed to have visited this sarovar, and taken a dip in the cool waters of this holy kund.

How to go: Kusum Sarovar is located at a distance of around 148 km from Delhi, 25 km from Vrindavan, and 26 km from Mathura. Lying between Radha Kund and Govardhan, the sarovar falls on the way of the holy parikrama path that is undertaken by many devotees. It is a wonderful place to visit as a day-trip from Delhi/NCR, especially during the winter months.