Samajwadi Party has roped in a world -renowned political consultant Steve Jarding to handle the election campaign for its attempt to win a second consecutive term in Uttar Pradesh. 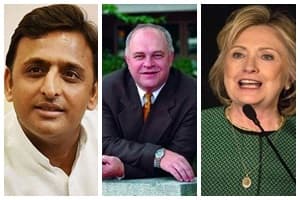 Jarding who is a campaign manager and political consultant for the Democrats in US, was giving his advise to SP on various issues and is now officially on board.

Ruling Samajwadi Party has roped in a world -renowned political consultant Steve Jarding of Harvard University to handle the election campaign for its attempt to win a second consecutive term in Uttar Pradesh. This comes after Congress hired Prashant Kishor as its political strategist to reclaim its position in the state. Jarding who is a campaign manager and political consultant for the Democrats in US, was giving his advise to SP on various issues and is now officially on board.

The first thing Jarding did, after assuming command, was redesign the publicity campaign for the SP government’s welfare schemes. This is the reason why actress Vidya Balan was roped in to endorse Samajwadi Pension Yojana. Talking to TOI in Lucknow, Jarding said: “Samajwadi Pension Scheme has reached far and wide, but the problem is that the beneficiaries don’t know whether it is a state scheme or central. So I suggested to the chief minister that the publicity programmes and campaigns be redesigned.”

According to Jarding, CM Akhilesh Yadav has an “impressive connect with the youth and people in rural areas, who see him as a person dedicated to development”. Jarding is in the city with his team to finalise the micro-level management of electioneering for SP. Talking about his strategy, he said that in UP -India’s most populous state -one universal manifesto may not work. He said that the CM has to get feedback from every constituency on what is required at the local level. “For example, non-payment of cane arrears may be an issue in western UP, but it is a non-issue in Bundelkhand. So, he has to draw up different programmes for different regions,” he told TOI.

“The chief minister told me to stay in the house of the poorest of poor villagers, live with him for about a week, and then report. So I did, and sent my report. District officials addressed the issues within 24 hours,” he added. From his primary survey, and from the feedback given to the CM, a clean image emerges of Akhilesh. “This could be the game-changer,” remarked Jarding. Jarding has been a campaigner, manager, political consultant and strategist since 1980. His clients include Hillary Clinton and former US vice-president Al Gore, and Spanish Prime Minister Mariano Rajoy. He teaches public policy at Harvard Kennedy School.

Next Story
Delhi is turning into hell, why can’t Manish Sisodia come back, asks BJP