Written by KRISHNAMURTHY V SUBRAMANIAN | Krishnamurthy V Subramanian | Updated: Jan 31 2011, 09:19am hrs
The recent increase in interest rates by the Reserve Bank of India presents a cause for serious concern since rising interest rates are likely to slow down corporate investment. The implicit argument that guides the central bank is that the decrease in investment would reduce demand, cool down prices and thereby ease inflationary pressures. However, since the inflation seems to be primarily due to bottlenecks on the supply-side, my fear is that these rate hikes will not do enough to control inflation. However, they will end up doing sufficient damage to economic growth by reducing corporate investment. To precisely assess the potential impact of the current rise in interest rates, in this piece, I analyse empirically what has been the impact of rising interest rates on corporate investment by all firms listed in the BSE and NSE. 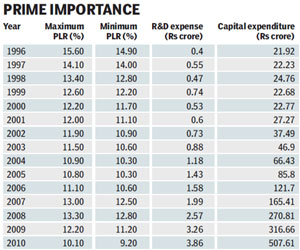 I use historical data on the Prime Lending Rates (PLR) of banks from RBIs Website for the time period 1996-2010. I complement the same with data on Capital Expenditures and R&D Investments for all BSE-NSE listed firms from the Centre for Monitoring of Indian Economy (CMIE)s Prowess database. The second and third columns in the table show the weekly average of the maximum and minimum prime lending rate across all banks for each year from 1996 to 2010. The fourth and fifth columns show the annual R&D expense and annual capital expenditures for an average firm listed in the BSE or NSE or both.

Second, high interest rates can hurt consumer demand as demand is, in an increasing number of industries, driven by the easy availability of cheap credit. For a good example of this situation, consider what happened to Cisco Systems in 2000. Because a huge part of its sales went to the telecommunications industry, Ciscos profitability depended on the health of the telecom industry. In 2000, the telecom industrys debt had ballooned to $700 billion. This debt became the telecom industrys financial Achilles heel, which, in turn, led to telecom companies buying less especially from Cisco. As a result, Ciscos profits shrank. From March 2000 to March 2001, Ciscos stock fell by nearly 70%! As of September 2001, Ciscos stock price continued to decline because the companies that were Ciscos customers were hurting financially. Anticipating such decreases in consumer demand, firms postpone any expansion plans.

Economically, the statistical relationship we have obtained shows that an increase of 1% in the prime lending rate reduces investment by an average firm by about Rs 38 crore. Given the 5500 firms listed at the BSE and the NSE, this implies that a 1% increase in the prime lending rate would collectively reduce corporate investment by over Rs 2,00,000 crore. Over the last twelve months, repo and reverse-repo rates have increased by about 3%, which will certainly translate into an increase in the prime lending rates. While large firms that borrow at sub-prime lending rates may not be affected as much by the rate hikes, the small and medium sized firms will certainly be affected since the rate hikes will increase their borrowing costs. Thus, even allowing for the fact that the decrease in aggregate investment will not be one-to-one and the increase in prime lending rate will not be one-to-one with respect to the hikes in money market interest rates, this implies that aggregate corporate investment will reduce by over Rs 4,00,000 crore (approximately twice the change for a 1% increase). This is a conservative estimate since there are scores of other unlisted firms that will decrease their investment as well, but are unaccounted for in the above estimate. Such large decreases in corporate investment are bound to significant dampen economic growth in the medium to long run. However, these rate hikes are unlikely to have a dampening effect on inflation. So, we may be in for a period of slowing down of economic growth together with continued high inflation.

The author is assistant professor of analytical finance at ISB, Hyderabad