Written by Indu Bhan | Indu Bhan | Ronojoy Banerjee | Ronojoy Banerjee | New Delhi | Updated: Sep 10 2010, 07:31am hrs
In a ruling that will decisively impact the evolution of competition law in the country, the Supreme Court on Thursday held that the Competition Commission of India (CCI) is well within its rights to direct investigation into suspected anti-competitive behaviour by market players without giving any prior hearing to the affected party. No appeal can be filed against CCIs direction for starting a probe, the court said.

The apex court ruling follows a CCI petition against an order of Competition Appellate Tribunal (Compat) the adjudicatory body that can examine its final orders if need be which set aside the commissions directions to its executive wing to conduct a probe into the alleged anti-competitive behaviour by Indian Railways and public sector steelmaker SAIL.

The SC ruling, therefore, reinforces the respective jurisdictions of CCI and the appellate tribunal which are already laid down in the Competition Act but became rather nebulous after the Compat order.

The CCI is not required by law to give any detailed reason for such initiation of probe, the court said, but it set a time limit of 60 days for the regulator to expeditiously complete the investigation.

Tarun Gulati, the counsel for CCI said the SC ruling is a path-breaking one which will go a long way in ensuring the smooth functioning of CCI and will also reduce frivolous litigation at the interim stage of the regulatory process. 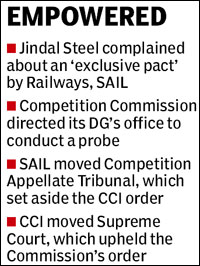 The CCI move was based on a compliant lodged by Jindal Steel & Power alleging that SAIL and the Indian Railways had entered into an exclusive supply arrangement. Following the complaint, CCI had directed its director-generals office to conduct a thorough probe, which was later set aside by Compat after SAIL approached the appellate tribunal.

No party can insist on hearing at the preliminary stage of the regulatory process, the SC said. IT also said CCI could issue an ex parte interim order in exceptional cases, but should hear the affected party within 30 days after the order is issued.

Counsel for SAIL Sunil Jain said: We are not totally remedy-less. If CCI does not give adequate reasons for the initiation of probe or if its order is incorrect, one can still approach the high courts.

In May, CCI had approached the apex court against the Compat order.

Corporate lawyers who FE spoke to said that the SC judgment was a watershed in the evolution of competition law in the country. Partner at Delhi-based law firm Amarchand Mangaldas Pallavi Shroff told FE that had the court not ruled in favour of CCI, then the whole investigation process would have got unnecessarily delayed. This is an important judgment because in the absence of it any investigation order by CCI could have got challenged in the Compat, causing delays in the regulatory process, she said.

The CCI has been given time for culling out the prima-facie evidence against a party/parties if any, she added.

Pradeep S Mehta, secretary general of CUTS International, said the Compat should not have overstepped its brief in the first place. No doubt the judgment was important in the context of the evolving competition law in the country. But I am surprised why the Compat issued a stay order in this case, he said.

However, a Delhi-based senior corporate lawyer who did not wish to be named said that if CCI orders a probe, the image of the concerned party takes a severe hit in the eyes of the public thereby causing irreparable damage to the company. If CCI initiates a probe against a particular corporate house it could have grave implications on the companys image, he said.