Ganpati Festival 2020: The Ashtavinayakas of Maharashtra

The tirtha-yatris visiting these sacred spaces hope to end the endless cycles of life and death and achieve moksha, blessed by the sacred aura of these places. 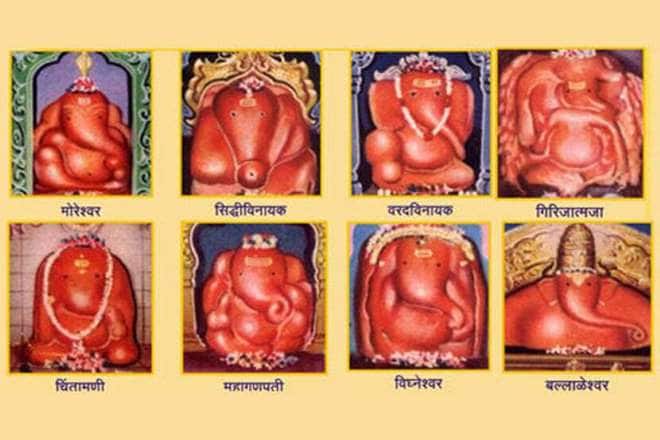 The Peshwas considered Ganesha as their kul-devta.

Ganesh Utsav 2020: Among the many tirthas in India, there are a group of eight Ganesha temples known as the Ashtavinayakas located in Maharashtra, near Pune, which are considered as important pilgrimage sites, especially by the followers of the Ganapatya sect. Generally, the sequence followed for the pilgrimage is by starting with the darshan of Moreshwar of Morgaon, followed by Siddhatek, Pali, Mahad, Theur, Lenyadri, Ozar, and Ranjangaon, finally ending again with a visit of the Moreshwar. All the eight Ganeshas are ‘Swayambhu’ murtis (naturally originated), and Jagrut as per the beliefs of the devotees, and the temples were most likely built by the Peshwas of the Maratha Empire in the 18th century. The Peshwas considered Ganesha as their kul-devta and were patrons of the Ashtavinakya temples and many other Ganesha temples.

The locations of the Ashtavinayaka temples are as follows:

Moreshwar temple: known as the Mayureshwar Ganesh Mandir, this is located in village of Moregaon near the river Karha, 55 km from Pune, and is considered as the most important temple among the Ashtavinayakas. This temple is associated with Morya Gosavi (Moroba), a well-known saint of the Ganapatya sect who worshipped at the Moregaon Ganesha temple. As per folklore, Ganesha defeated the asura Sindhu, son of Chakrapani- the king of Mithila, here in Moregaon. The Moregaon Ganesha temple has four gates facing the four cardinal directions, with a murti of Ganesha on each gate showing him in four forms of the four yugas, while each of the murtis represents a Puruṣārtha.

Siddhivinayak temple: this temple is located on the banks of the river Bhima in the Karjat, and can be reached from the village of Shirapur in Pune district. It is believed that when Vishnu, rudely woken up from his yognidra, went for a battle against the asuras, did not invoke Ganesha prior to the war; hence failed to defeat the asuras. Realising his mistake Vishnu came to worship here at Siddhatek, invoking Ganesha with the mantra “Om Sri Ganeshya Namah.” Pleased with the invocations, Ganesha blessed Vishnu with special powers, who thereafter slew the asuras. The Siddhivinayak temple sanctum was built under the patronage of Rani Ahilyabai Holkar of Indore, and an official of the Peshawas Sardar Haripant Phadke built the Nagarkhana.

Ballaleshwar Temple: this temple is located in the Sudhagad taluka of Raigad district, and contains a large panchadhatu bell gifted by Chimaji Appa after he defeated the Portuguese in Vasai. The story associated with this temple runs as follows – a trader by the name Kalyan Sheth who lived in the Pali region of Konkan, had a son named Ballal who was a great devotee of Ganesh from a very young age. He would often go into the forest to worship a large stone Ganesh murti, much to the annoyance of his father. Once while Ballal was deep in his prayers, his father beat him with a stick so hard that his clothes were drenched in blood. Ballal became unconscious from the beating, but against started chanting Ganesha’s name the moment he regained consciousness. Seeing his bhakt’s complete devotion Ganesha appeared and healed his wounds. Ballal wished that his god would stay in Pali forever and Ganesha agreed, and remained in Pali taking the name of his devotee Balleshwar.

Varadavinayak Temple: the temple is known as Varad Vinayak, which means the giver of success and fulfiller of all wishes. Here the main image of Ganesh faces east, he is seated on a rock-cut throne, and his trunk is turned toward the left. The murti of this Ganesha was found in a pond by Dhondu Pudkar in 1690 CE, and the temple was built by Subhedar Ramji Mahadev Bivalkar in 1725 CE.

Chintamani Ganapati Temple: The temple is situated 22 km from Pune, in the village of Theur that is located at the confluence of three rivers—Mula, Mutha and Bhima. It is believed that here Vinayak fought Gana and after defeating him took the jewel Chintamani back from him clutches. He returned the jewel to rishi Kapila, who then put the jewel around the neck of Vinayaka. Hence the name was derived Chintamani Ganapati. Here in the village of Theur, Moraya Gosavi is said to have performed penance; and according to folklore Ganesha met his devotee in the form of a tiger. This temple was built by Shri Dharanidhar Dev, son of Moraya Gosavi.

Girijatmaj Temple: this temple stands as one among 18 caves and is the eighth one. The sindoor adorned murti of the ‘Girijatmaj Ganesh’, is unique among the Ashtavinayakas, as it has been sculpted out of the cave wall and is viewed only from the rear side. It is believed that Parvati (Girija) performed penance to get Ganesha at this place; hence the name Girijatmaj (which is: Girija’s Atmaj or Girija’s son). To visit this temple in Lenyadri, which is situated around 8 kilometres from Junnar, one has to climb nearly 300 stone steps.

Vighnaharta Ganapati Temple: here Ganesha is said to have defeated the asura named Vighnasura, who was created by Indra deva who wanted the asura to destroy a prayer ceremony organised by the ruler Abhinandan. After losing the battle, when Vighnasura asked for forgiveness, Ganesha granted him mercy and he himself remained at Ozar, taking the name of the asura Vighnahar, as per the latter’s request. Situated by the river Kukadi, the temple is surrounded by high walls made of stones, and the temple pinnacle is made of gold.

Mahaganapati Temple: The eighth one among the Ashtavinayak temples is the MahaGanpati temple, which is located in in Ranjangaon near Pune. It is believed that Shiva worshipped Ganesha here before defeating Tripurasura, and the temple was built by Shiva himself on Tripuri Purnima, and he then placed the Ganesh’s murti in the form of ‘Mahaganapati’. The temple sanctum was built by Madhavrao Peshwa, and the temple hall was built by Sardar Kibe of Indore, while two Peshwa generals donated towards the construction of the temple galleries. Interestingly the temple has been designed in such a manner that during ‘dakshinayan’ and ‘uttarayan’ the sun rays directly fall on the deity in the sanctum.

In India, this tradition of teertha-yatra is deeply rooted within the realms of its religious consciousness. There are early mentions of pilgrim spots or sacred places in the Vedas (Rig Veda and Atharva Veda), while the Mahabharata speaks of many holy sites across the sub-continent, and their number increases in the Puranas. To the devotees, these tirthas, such as the Ashtavinayaka teerth-yatra, are much more than just geographical locations on the map. The tirtha-yatris visiting these sacred spaces hope to end the endless cycles of life and death and achieve moksha, blessed by the sacred aura of these places.