Trade and commerce in Sindhu-Saraswati civilisation: Know about the Srenis or guilds of ancient India

Since our FM mentioned the Sindhu-Saraswati civilisation or the Harappan culture, it is prudent that we start our journey from there. 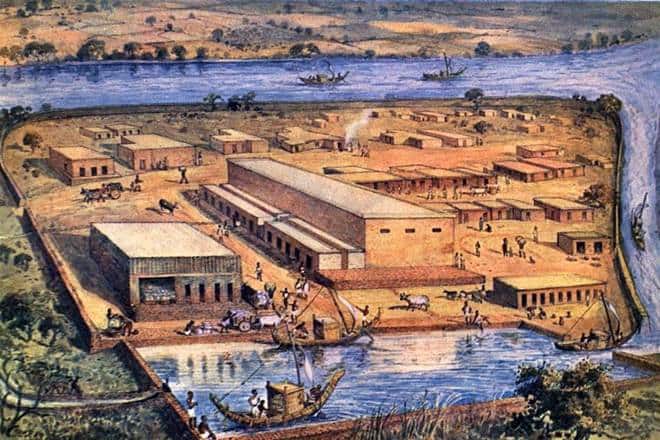 A re-imagining of life in Lothal ( a Harappan era port) 4,000 years ago, by S. R. Rao, depicting the town plan, bead factory, and warehouse.

It was interesting to hear the mention of the word ‘srenis’ by our Finance Minister Srimati Nirmala Sitharaman in her Budget speech on 1st February 2020. In her speech she said as much, “The guilds of Saraswati-Sindhu civilization & the Harappan seals are remarkable.

They belong to 3300 BCE. Some words from the Indus Scripthieroglyphs have been deciphered. Commerce and trade related words show how India for a millennia is continuing as rich in skills, metallurgy, trade, etc. “Takara Kolimi=Tin smithery”, “Sreni “= Guild,” Sethi” = wholesale merchant, “Poddar” = Assayer of metal into treasury.” What is remarkable here is how our FM with a single use of a word, brought forth the nation’s attention (albeit through an immediate series of criticisms mostly) to an economic institution or system that has been an integral part of India from times immemorial.

Since our FM mentioned the Sindhu-Saraswati civilisation or the Harappan culture, it is prudent that we start our journey from there. Harappan Culture is said to be the first developed urban civilization in India, and is known for its advanced form of town planning, high quality civil life, well developed form of art and crafts, advanced drainage system, elaborate system of water management, and a thriving trade and commerce with connections to other civilisations of that era. Seeing the meticulous and rather organised manner in which the Harappan Culture people functioned, it would be safe to accept the fact that there would have been some sort of economic organisations like the srenis / guilds controlling the trade and commercial activities of that time.

However, while we can make deductions from a study of the remains, which does indeed give a good insight into the lifestyle of the people living in the Harappan Culture, we need more confirmations of it from the various ongoing archaeological excavations that are bringing forth new knowledge of this culture pretty regularly. As regards the presence of guilds in early Vedic society, it remains a topic of debate among the scholars, as some consider the early Vedic society to be primarily pastoral, and preoccupied with war, thus leaving very little time for surplus grains, or artisans to create their artwork as merchandise, or traders to form guilds. Perhaps when these people finally settled down and formed prosperous societies that relied on farming and exploitation of various natural resources (such as mining) that their social and political conditions became conducive to forming organisations, such as guilds.

For undoubtedly the Vedic literature is replete with terms like sreni, puga, gana, and vrata, all denoting various co-operative bodies in ancient India. Among these the terms, the word sreni was used in Vedic literature as “a form of industrial and mercantile organization which played a big part in the economy of ancient India” (Al Basham, The Wonder that was India, 1967, p. 219), similar to what we know as a guild. The various occupational groups belonging to the some varnas were mainly involved in the processes of production, distribution and trade in ancient India. Engaged in such professions they soon understood the necessity of creating guilds that would protect their interests.

Since a group of people living in a particular area and having the same profession would naturally tend to cooperate with each other more, the art and crafts were localized, and there were entire villages of people living together under a guild, following the same profession. It not only helped to foster a greater sense of fellowship, it also turned the work hereditary, where a child could easily learn from the elders around him.

Thus, knowledge kept being transferring from the older to the newer generations, and there was always a sizeable number of workers available from different guilds. Within towns, there would be separate streets or localities for various craftsmen and workers, such as florists, ivory-workers, conch workers, perfume makers, weavers, washer-men, weavers, potters, etc.

In his book Arthasashtra, Kautilya suggested the allotment of different streets and quarters to different craftsmen, and traders selling different merchandises, as it would help customers while buying, the State in administering laws and collecting taxes, and the Guilds in taking care of their own matters. Thus, by localising crafts and making them hereditary under a Sreni or a Guild, it helped the traders, workers, and craftsmen in maintaining their separate identities, getting protection (from robbers and irregular armies), and getting a fair chance to negotiate and make their voices heard with the higher State authorities. Sometimes entire guilds would also migrate, as we find in the Samuddavanija-jataka, where an entire guild of carpenters moved out of their village as they failed to complete their work and supply the products they were supposed to deliver, despite receiving advance monetary payments.

From 6 th c. BCE as Buddhism and Jainism emerged (both being more egalitarian than Hinduism at that time) favoured the kings, nobles and traders, which gave a better socio-political environment for boosting the growth of Srenis/Guilds. Soon Guilds developed laws regarding production, structuring, and price fixing of their commodities. These laws, accepted by the State, were more of a safeguard against any kind of interference or oppression by the State on the guilds. However, as society and religions became more organised, the guild laws also underwent many changes. This transition is clear when we read the guild laws in Gautama Dharmasutra or some other Smritis where we find them as mere supervisory moral codes; however, by the time of Yajnavalkyasmriti, these laws seemed to have become inviolable ones.

The system of guilds or srenis carried on unhindered into early medieval India, and despite losing grounds still held onto their power. However, with the advent of Sultanate and Mughal rule of India, the huge network of trade and commercial organizations broke down rapidly, and the sreni/guild system totally disappeared, replaced by a new power structure. As professor Niharranjan Ray said in his book Bangalir Itihas: Adiparba (1949) the flag posts of the srenis/guilds that once held colourful banners particular to each guild, soon turned into posts for tying animals in medieval north and eastern India.

A simple look back at the history of srenis/guilds helps one to understand their importance in the arena of trade and commerce, and how they formed the backbone of the craftsmen, traders, and workers in ancient India, giving them a voice against the State authority and highhandedness. It is just a matter of choice that one hears the budget speech and immediately jumps in to a debate on to why the FM said the Harappan script has been deciphered, or one can simply open a book or even research from the available books and journals as to why the term or Guild was used by our FM at all in her speech.

(The author is a travel and history writer . Views expressed are personal.)

Follow us on
Latest News
No choice: Elon Musk justifies layoffs
SBI profit up 74%  at Rs 13,265 crore
Inside track by Coomi Kapoor: Deadline postponed?
Across the aisle by P Chidambaram: No apologies, no resignations
Ringside view by Tushar Bhaduri: Power hitters
Interview | We’d like to grow in line with industry: Sanjiv Chadha, BoB chief
DCB Bank Q2 net profit jumps 73% to Rs 112 crore
Photos
Dazzling & Astounding! Proposed design of the to-be redeveloped Dakaniya Talav Railway Station in Rajasthan-PHOTOS
12 hours agoNovember 5, 2022
Heart-wrenching! Here is a look at Morbi and the suspension bridge that collapsed
5 days agoOctober 31, 2022
In Pictures: PM Modi in Kargil to celebrate Diwali with soldiers, says, ‘All of you have been my family for years now’
2 weeks agoOctober 24, 2022
Read More
×
Borrowing is an intergenerational burden, says FM
STL turns positive after 3 quarters, reports net profit of Rs 44 cr in Q2
Book Review| Ambedkar: A Life – Babasaheb revisited
On the shelf: Here are some of the e-books that you may find interesting
Book Review| The Dolphin and the Shark: Stories on Entrepreneurship
Contributor to climate change! Holiday ‘hot’ spots