In terms of archaeological records, rock art is viewed as cultural data that forms a bridge between the artists of the past with the artists in the present. 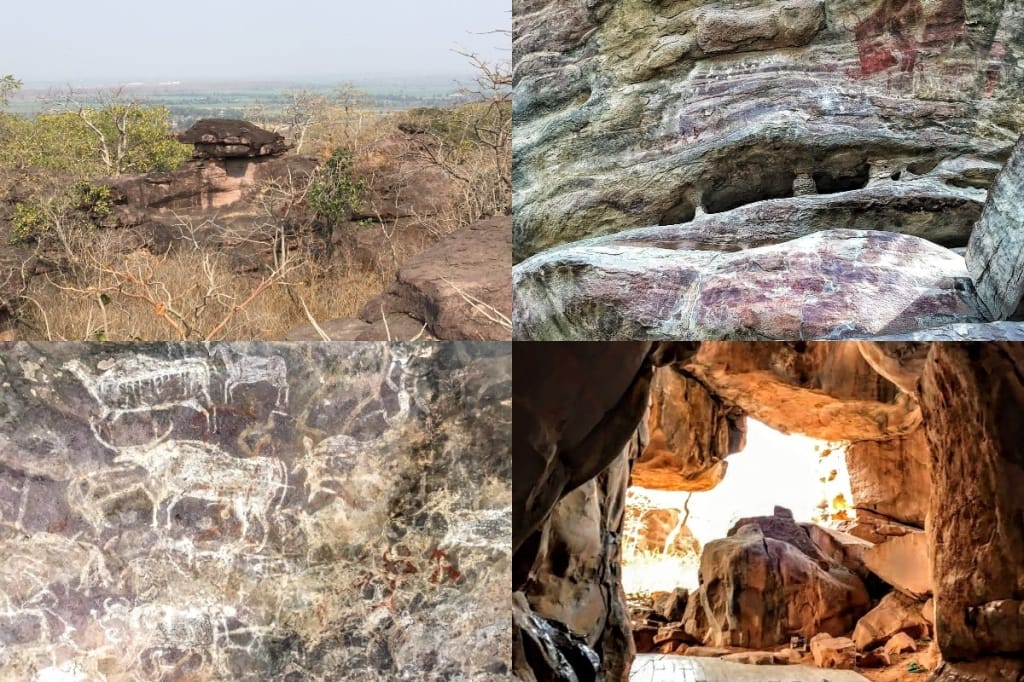 A recent discovery in Haryana

Recently after environmental activist Sunil Harsana discovered prehistoric cave painting in the Mangar Bani hills in May this year, archaeologists in Haryana conducted further explorations in the Shilakhari, Mangar, Kot and Dhauj areas in Faridabad, and Roj ka Gujjar and Damdama in Gurgaon in June. The archeologists have postulated (based on tool topology), the prehistoric site at Faridabad’s Mangar Bani hill could be 1,00,000 to about 15,000 years old, with also signs of later period habitations from 8th-9th century CE. While the cave paintings are yet to be dated, as per the experts, some of them appear to be from the Upper Palaeolithic period, and the site could turn out to be among the biggest Palaeolithic sites in the Indian subcontinent, comparable to the Bhembetka caves, pushing back the history of Haryana further in time.

In terms of archaeological records, rock art is viewed as cultural data that forms a bridge between the artists of the past with the artists in the present. These paintings establish a ‘visual dialogue’ between the past and the present, helping us to understand the social, religious, and cultural workings of a world separated from the present by the vast chasm of time. While archaeological artifacts such as a tool or weapon or pottery give an absolute identification of a specific nature of a certain era, the rock paintings leave behind more subtle cultural messages, by depicting certain particular moments or incidents. It doesn’t provide us with an absolute identification, but rather presents a viewpoint that combined the aesthetic sense of the painter with his personal views, social norms, religious traditions, and cultural values of that era. Thus, it is an artist from a prehistoric era who had used his creativity and sense of art to leave behind a message that transcends all boundaries of time, context, and space, and reaches out to the future. It’s like looking at messages or codes (as rock art paintings) from the fragmented past, and looking for patterns to comprehend and interpret the meaning in them.

Also Read
International day of forests: Collaborative effort to help save our forests
Wondering why it never snows in Delhi even when the city is colder than many hill stations? Here’s the answer
The reason ‘black tigers’ exist and why that is dangerous
Joshimath Crisis Explained: 4 reasons why the Himalayan town is sinking; Know what’s happening under the ground

In India remnants of cave rock art has been found in many states, especially from hilly areas that have sandstone or sedimentary rocks. In south India, some important rock art sites are Kupgal, Badami, Maski, Piklihal, and Tekkalakota in Karnataka; Budagavi, Chintakunta, Kethavaram, and Kurnool in Andhra Pradesh; Alambadi and Padiyandal in Tamil Nadu; and Edakkal and Ezuthupara in Kerala. In north India, there are few rock art sites in the high altitude areas of Dras, Kargil, Mulbekh, Nurla and Leh (the UT of Ladakh); while there are many rock engravings (likely of a later period) located along the upper reaches of the Indus and its tributaries in the Karakoram hills, near Chilas on banks of the river Indus, and in the Zanskar Valley. In the Himalayan foothills, several rock paintings have been reported near Almora in Uttrakhand. Besides these, there are rock art sites with paintings in the Ganga-Yamuna Doab area (Uttar Pradesh) at Varanasi, Prayagraj, and Agra. It was here in this area (Mirzapur district) that the first rock shelters were discovered by Archibald Carlyle in the 1860s, 12 years before the discovery of Altamira in Spain, but unfortunately reported much later in 1906. There are nearly 115 rock art sites in this district, with site names such as, Bhaldharia, Bijayagarh, Likhunia, Kauva-Khoh, Hathvani, Lakhma and Mukhadari. The most famous rock art site in India is the Bhimbetka group of rock shelters in Madhya Pradesh, which is a World Heritage Site as declared by the UNESCO in 2003. The petroglyphs in Auditorium Cave (Bhimbetka III F-24) are believed to be of Acheulian age, and these Acheulian petroglyphs are currently among the oldest known rock art in the world.

There are generally two types of rock art- Pictographs and Petroglyphs. In India the pictographs are mostly monochrome, with few that show bichrome and polychrome features. Pictographs are paintings (mostly in red colour, with shades varying from deep violet to yellowish brick-red) seen on the ceilings and walls of naturally formed shelters and caves. Petroglyphs are mark or bruises on rocks made by pecking, scooping, hammering, or rubbing the surface of granite rocks.

Palaeolithic period- Rock art in India had an early start, as very clear from the Acheulian petroglyphs found at the Bhimbetka site, and the odd 500 cupules from Daraki- Chattan near Bhanpura (Chambal valley) that belong to the Palaeolithic period. The rock art from this period in India are generally characterized by the ‘S’ shaped human figures that are shown performing various activities such as dancing, hunting, or running. Often these S-shaped human figures are superimposed on earlier paintings in red ochre.

Mesolithic era- the rock art of this period is mainly found in the form of pictographs, they show uniformity of context and style across the country, and tend to depict various scenes largely from a hunting gathering community. While the animals have been given more natural forms, humans remain mostly static. This period interestingly is also known for X-ray depictions, where internal organs of humans and animals have been shown.

Neolithic Chalcolithic era- this period shows the transition of the hunter-gatherer community into the phase where domestication of animals started. This is clearly seen in the frequent depictions of bullock carts and horse drawn chariots. Social stratifications are also seen starting in the Chalcolithic era. Interestingly while farming was the economic backbone of this era, it has been rarely represented in rock art. In south India many rock painting sites are near Megalithic burials, and it is believed that some of the pictographs and petroglyphs can be related to burial practices.

Historic era: this era shows many petroglyphs (north India- Ladakh and Chilas) that depict Buddhist themes with inscriptions in Kharoshti and Brahmi. The paintings mainly show war like activities, where heavily decorated elephants are horses are seen engaged in what appear as battles, while armored soldiers are seen fighting with swords, daggers, spears, shields, and bows and arrows.