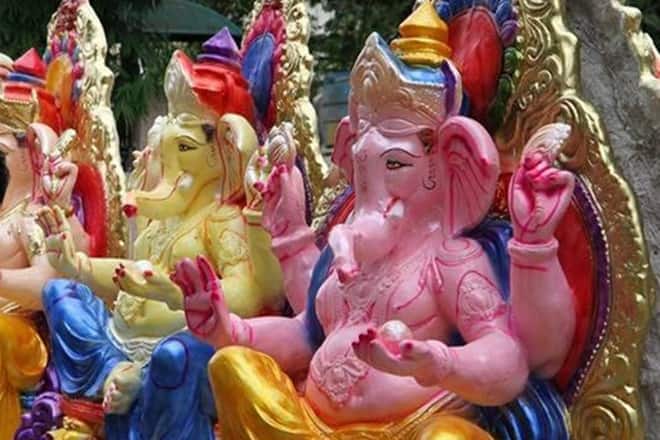 According to Hindu mythology, Lord Ganesha is believed to bless devotees with good fortune and prosperity.

[The learned one, who wishes, for more life, wealth and love,
Should salute with his head to, Lord Ganapati who is the son of Goddess Parvati]

Also Read
Nobel Peace Prize 2022: Ales Byalyatski, Russia’s Memorial and Ukraine’s Center for Civil Liberties win
From Mesopotamia to Indus Valley civilisation, here’s some of the oldest civilizations across world
World Smile Day: History, significance, health benefits and quotes to bring that twinkle back to your face
‘X’ by Elon Musk: Here are the richest man’s plans this app

Ganesha, the remover of all obstacles. The son of Shiva and Parvati. The deity is worshipped first by all those who are performing pujas and rituals, while invoking other gods, during difficult compositions in writing, and in other times in daily affairs. He is also variously known as Ganapati, Ekadanata, Heramba, Lambodara, Surpakarna, Gajanana, and Guhagraja.

The Ganesha Vighnesvara that we generally worship is shown with two eyes (he may have three too as per some Agamas, but it’s rare), and four arms (though he also be seen with 6, 8, 10, or even 16 arms). There is an interesting story associated with the huge belly of this deity that is tied with a snake. As per a Puranic story one day Ganesha received large number of modakas from his devotees and he ate them all. As he started going back home riding his vahana – the mouse, who found it difficult to carry Ganesha’s load in the dark and move, suddenly saw a snake crossing the way. Out of fear he lost control and tripped, causing Ganesha to fall down heavily, which burst open his overloaded and inflated belly, spilling all the modakas around him on the ground. Ganesh picked up all the modakas, put them back in his belly, and used the very snake to tie his belly for causing so much trouble. From then the snake is seen tied around his stomach as a girdle. The moon meanwhile seeing the entire incident burst out laughing, much to Ganesha’s annoyance. He took his tusk, aimed and threw it at the moon, which hit the latter causing him to lose his shine. This caused deep darkness across the world, and after receiving requests from the gods to take back his curse, Ganesha modified it from complete loss of light to periodical waxing and waning, thus providing a symbolical explanation of the moon phases from full moon to no moon nights in religious texts.

There are various forms of Ganesha- Vighneswara that we see (described in details in the book by T. A. Gopinath Rao). A brief description of some of them are as follows:

Bala Ganapati- here he is in the form of a child with four arms and an elephant head. In his four hands he carries sugarcane, jackfruit, mango and a plantain, while the trunk holds a wood apple.

Sakti Ganesha – this shows Ganesha with a consort, and has various forms such as Lakshmi-Ganesha, Uchchhishta- Ganesha, Maha Ganapati, Urddhva- Ganapati, and Pingala Ganpati. Here Ganesha is seated on a lotus seat (padmaasana) with a green coloured Sakti by his side, whom he is in the act of embracing. This is a terrific aspect of Ganesha.

Heramba- it’s a very different form of Ganesha, where we see him with five heads, with four facing the four cardinal directions and one placed on top looking upwards. His vahana is a lion and he should be shown carrying danta, pasa, parasu, aksmala, three headed mudgara, and modaka, while the two remaining hands should be in abhaya and varada mudras.

Prasanna Ganapati – here Ganesha is standing (could be sambhanga or abhanga) on a padmasana. He has four hands in which the two back hands carry pasa and ankusa, while the front two hands are shown in abhaya and varada mudras.

Nritta Ganapati – here Ganesha is shown as dancing. He has eight hands, of which the seven hands hold pasa, ankusa, kuthara, modakas, danta, valaya, and an anguliya (a ring). The remaining hand remaings hanging freely to denote a dancing posture. To show he is dancing his left leg is slightly bent and rests on a lotus seat, while the right leg is also bent but hanging in air to denote movement.

Bhala Chandra- after the moon was cursed and lost its shine, it is said that Ganesha took him, using him as a tilak on his forehead, and saved him. This form of Ganesha is known as Bhala Chandra.

SurpaKarna – when Agni was cursed by the rishis and became powerless, it was Ganesha who fanned Agni with his large ears bringing back the dying fire to life. Hence, he got the name Surpakarna because he used his ears like a surpa or a winnow.

Ekadanta- as per Brahmanand-purana, Parasuram after destroying the kshtriyas went to meet Shiva, but Ganesha stopped him at the gates saying Shiva and Parvati were in a conversation, and Shiva will not see Parasuram. However, Parasuram did not listen to Ganesha and tried to force himself in, leading to a scuffle during which he threw his parasu at Ganesha, who received the blow on his left tusk that broke and was lost. From then he was known as Ekadanta.

While his forms and names are many, Ganesh or Ganapati as he is best known, remains the same: the son of Parvati, well loved by his devotees, who presides over all obstacles and removes them, in order to make the lives of all mortal men a little easier.

(The author is a well known travel writer. Views expressed are personal.)