Pitrpaksha, a ritual started by Karna (Mahabharata), is a 16-day period when Hindus pay homage to their ancestors through food offerings. It started this year on 1st September and ended on 17th September. 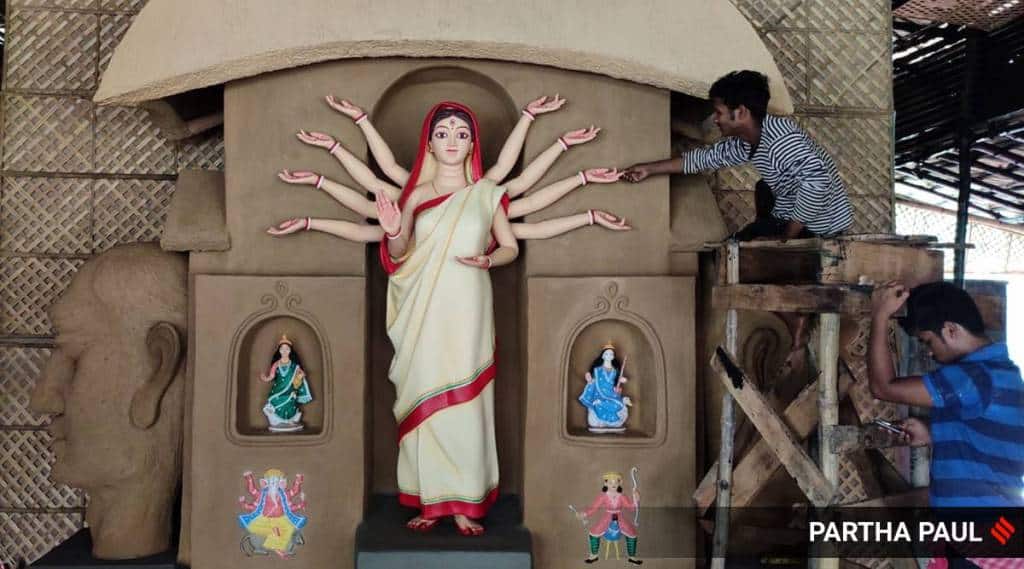 In this form the devi possesses ten arms (which can go up to 18 arms), and like Durga she is also associated with the colour red.

Pitrpaksha, a ritual started by Karna (Mahabharata), is a 16-day period when Hindus pay homage to their ancestors through food offerings. It started this year on 1st September and ended on 17th September. At the end of it started the Devipaksha, which was celebrated with great fervour in West Bengal as Mahalaya, with people doing tarpan and paying homage to their forefathers. It also signified the arrival of Devi Durga, the coming of the mother goddess to her home on earth. At one time all Bengalis would ritually wake up on the day of the Mahalaya at 4 am to tune into their radios and listen to ‘MahisasuraMardini’, a recording of strotra and song recital performed by Birendra Krishna Bhadra along with many others, which would mark the beginning of their beloved Durga Pujo. While many still follow the 4 am schedule, now there are the other options of listening to it later in the day on YouTube, or seeing Mahisasuramardini as a dance drama on TV channels.

Also Read
Gasping for clean air? Delhi implements Stage 4 GRAP – All you need to know
UN chief Antonio Guterres warns planet is heading toward ‘climate chaos’
Stressed about house interiors this festive season? Here’s how you can do it with just a click

From the two well-known Durga-stotras in the Mahabharata and Aryastav III (in Harivamsha) we get a clear picture of the various aspects associated with the Devi. From being a mother, a daughter, and a sister, to a deity who is highly revered and worshipped, the characteristics attributed to her many and varied. Among the various devi-stutis found in the Puranas, the most important ones are found in the Devi-Mahatmya section within the Markendeyapurana. In the last few verses where the devi speaks, she tells of reincarnation, the various forms that she takes in different births in order to protect the three worlds (trailokyasya hitharthya) and kill the evil forces (danavas).

“Whenever trouble arises due to the advent of the demons, I shall incarnate and destroy the foes. “

Devi Durga, the sister of Vishnu (Surabhedagama), a part of Adi Sakti, is described in the scriptures as with four or more arms, three eyes, and of a dark complexion. She is beautiful, dressed in yellow clothes, bejewelled, and wears a karanda mukuta. When shown with four hands, her front left hand rests on the hips in a katyavalambita pose, while the back left hand carries the sankha. The right front hand is in abhaya mudra and the back right hand carries the chakra. The devi stands on a lotus seat, or on the head of a buffalo, or is seated on a lion. A snake forms her breast band, and a red drape covers the upper part of her body. When depicted with 8 arms, besides the sankha and the chakra, the devi is shown with weapons, such as sula, khetaka, khadga, pasa, a bow, and an arrow.

The two most popular forms of Devi Durga are:

In this form the devi possesses ten arms (which can go up to 18 arms), and like Durga she is also associated with the colour red. She wears a jatamukuta with a crescent moon in it, is youthful, bejewelled, and has beautiful eyes. She is generally depicted with 10 hands carrying pasa, khetaka, ghanta, parasu, and ankusa in her 5 left hands; and bana, trisula, khadga, chakra, and saktyayudha in her five right hands. Below her is shown the Mahishasura, and the devi is shown in the act where she is just about to kill him. Often Mahishasura is depicted as just a buffalo; sometimes he is shown with a human body and a buffalo head; and sometimes he is shown as a human emerging from the dead body of the buffalo. Once devi Katyayani kills Mahisasura, thereafter she is known by the name Mahisasuramardini.

Here Devi is generally described as possessing ten hands, three eyes, a jata mukuta with a chandra-kala in it, her eyes are like the blue lotus, and her skin is like that of an atasi flower. In her right hands she carries khadga, chakra, saktyayudha (a spear), bow, and trisula. In her left hands are seen ghanta, parasu, khetaka, pasa, and ankusa. At her feet lies the cut head of a just killed buffalo, or the Mahisasura is seen coming out of the body of the buffalo with a sword in hand and her trisula is plunged deep inside his neck. Devi’s right leg rests on the lion, and her left leg placed firmly on the Mahisasura.

During the Durga Puja that is celebrated with great pomp in many states of Eastern India, which includes West Bengal, Odisha, and Assam, the devotees mainly worship the Mahisuramardini form of Devi Durga.

Follow us on
Latest News
Health Insurance Top Up vs Super Top Up Plans: Know the benefits and differences
Israel: Benjamin Netanyahu-led coalition to form new govt after securing impressive win in election
Pass Pass Pulse launches ‘Pulse Candy Hunt’ on Candy Day
The government offers many financial aids to the youth so they can embark on the path of entrepreneurship
T20 World Cup 2022: New Zealand first team to seal semifinal spot
PM to address Abu Dhabi Space Debate
Planning to invest in Gold? Here’s what to do in November
Photos
Heart-wrenching! Here is a look at Morbi and the suspension bridge that collapsed
4 days agoOctober 31, 2022
In Pictures: PM Modi in Kargil to celebrate Diwali with soldiers, says, ‘All of you have been my family for years now’
2 weeks agoOctober 24, 2022
In Pictures: PM Modi inaugurates Deepotsav in Ayodhya; World record set by lighting of over 15 lakh diyas
2 weeks agoOctober 24, 2022
Read More
×
Third of world heritage glaciers under threat, warns UNESCO study
Gasping for clean air? Delhi implements Stage 4 GRAP – All you need to know
COP27: India to push developed countries for action on climate finance, tech
From converting tees to mops to sharing clothes with her sister: Here’s Shefali Shah’s guide to reusing clothes
Global space cooperation is an integral part of Indian space programme says official
Intercity travel demand in India increased by 180-200% from last year; To surpass pre-COVID levels by 2022 end: Manish Rathi, IntrCity