Written by P. Vaidyanathan Iyer | New Delhi | Updated: Jan 20 2011, 15:40pm hrs
A first-ever caste census of India Incs human resources has revealed that the proportion of scheduled caste and scheduled tribe employees in the private sector in some of the most industrialised states hardly reflects their strength in the general population of those states. The only exception is Tamil Nadu, which ranks number one in industrialisation and employment (by number of factories and persons, according to the Annual Survey of Industries 2008-09), where Scheduled Castes (SCs), Scheduled Tribes (STs) account for almost 18% of industrial workforce and 20% of the states population.

In sharp contrast are some of the other most industrialised states such as Maharashtra, Gujarat, Karnataka, Madhya Pradesh, Rajasthan and West Bengal which show a sharp mismatch between SCs, STs as a percentage of the total workforce in the private sector and SCs, STs as a percentage of the states total population. For instance, SCs and STs make up 19.1% of Maharashtras population, but their share in private sector human resources is only 5%. In Gujarat and Karnataka, SCs and STs are just about 9% of the staff strength, but account for 22% and 23%, respectively of the state population.

Living under constant threat that legislation on employment reservation in the private sector may find a place in the governments inclusive growth agenda, the Confederation of Indian Industry, the countrys largest industry chamber, undertook a caste census of its members spread across 22 states and union territories to get a better idea of the affirmative action practiced so far by India Inc. The survey is restricted to 8,250 members of the association, which together employ 35 lakh people. But it does give a flavor of the manpower mix in India Inc.

The survey reveals that companies in the least industrialised eastern region, and where jobs are far and few, have the highest percentage of SCs, STs. So, in Bihar which ranks a distant 17 as per the Annual Survey of Industries 2008-09 SCs and STs together constitute a fourth of the total workforce, whereas they form just 16.6% of the states total population. Chhattisgarh is a shade better with more number of factories, but half its workforce comprises SCs, STs, comparable to its total SC, ST population of 43.4%. 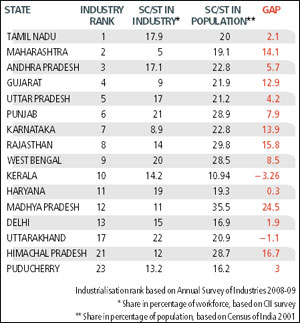 The private sector in the western region comes as a surprise. Maharashtra, the hub of India inc, is second only to Tamil Nadu in terms of industrialisation and employment. CII members in the state employ 20.72 lakh people, almost 57% of the total employee base considered in the survey. But SC, ST proportion in the workforce is one-fourth of their percentage in the total population. In Madhya Pradesh that ranks 11 in industrialisation and workforce, SCs and STs account for 11% of the private sectors total staff strength, less than a third of their strength in states population.

The private sector in Tamil Nadu, Andhra Pradesh and Kerala has on its rolls a remarkably high percentage of SCs and STs. Tamil Nadu where the politically-driven Dravidian movement significantly empowered the SCs and STs is distinct because it also ranks number one in terms of number of employees and factories. The SCs and STs who account for 18% of the workforce in CIIs member companies constitute 20% of the states population. In Kerala, for entirely different reasons such as 100% literacy, the percentage of SCs and STs in the private sector is higher than their share in population. In the north, Delhi and Haryana buck the general trend where the gaps between SCs, STs at work and their representation in the population are significantly higher. The CII survey of the private sectors manpower mix in Chandigarh, Punjab and Rajasthan shows that SC, ST proportion is 25-50% lower than their strength in the total population.