Visit Kailashanathar temple in Kanchipuram: A marvel in stone and stucco 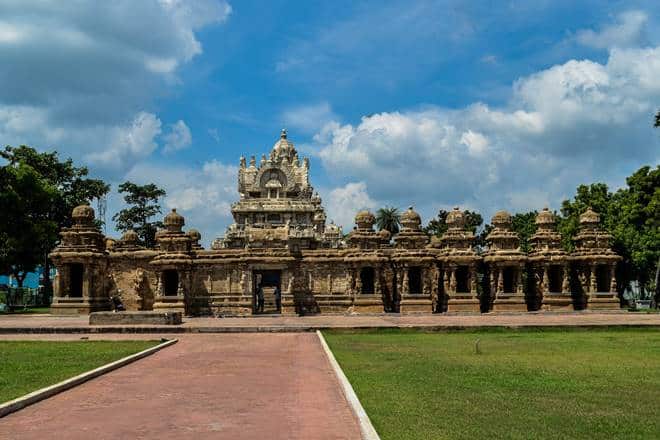 Kailashnathar temple in Kanchipuram stands as among the finest in the Pallavan era temple architecture.

Kanchipuram, the city of thousand temples, lies between the Palar and Vegavati rivers in the modern day state of Tamil Nadu. This ancient city is mentioned in the Garuda Purana as one of the seven most sacred pilgrimages or teerthas in India:

Kanchipuram was the Pallava capital from 3rd – 9th century CE, while Cholas ruled it from 10th to 13th century CE, followed by the Vijayanagara dynasty from 14th to 17th century CE. Under these dynasties Kanchi remained an important religious and educational centre for Indic studies.

Kailashnathar temple in Kanchipuram stands as among the finest in the Pallavan era temple architecture. Built under the patronage of the Pallavan king Rajasimha (Narasimhavarman II) between 685-705 CE, the temple architecture followed the Smartta traditions, which included worship of all five sects of Hinduism: Shiva, Vishnu, Sakti, Ganesha, and Surya. The temple is oblong in shape, with a wall built around the temple, a first of its kind in those times.

There are two temples within the walled complex. The first one is known as Rajasimhesvara, which is larger and dedicated to Shiva, and is on western side. The other temple on the eastern side is also dedicated to Shiva, but is known as Mahendravarmesvara, and was built later by Mahendravarman III. The sanctums of both temples hold faceted Shivalingas with a Somaskanda panel (Shiva with Parvati and Skanda) on the rear wall.

On the inner face of the complex wall there are 58 small sub-shrines or devakulikas, and eight more such devakulikas on the outer front wall facade. This is unique, and the design is not repeated in any other temples, except at the Virupaksha temple in Pattadakal. Each devakulika has different images on its wall, varyingly representing manifestations of Shiva, Vishnu, and Sakti. There are also images of Kartikeya, Ganesha, and Surya.

The foundation of Kailashanathar is built of granite, while the superstructure is of sandstone that has plaster and paint on it. While most of the original paint has now disappeared, the temple walls show many instances of clumsy repair work of 19th or early 20th century CE on the original Pallavan plaster.

The temple also wears a rather weathered look, owing to the fast crumbling nature of sandstone. The Kailasanathar temple once held beautiful wall paintings, most of which are now lost forever. From whatever remains, it can be seen that these paintings held a close resemblance to the classical Ajanta style, with some unique Pallavan identities. This art was carried on by the Cholas, and later we see its brilliant outcome in the grand imperial Chola art.

Kailashanathar temple has the rare honour of holding some of the oldest calligraphy art depicting the titles of Pallavan kings. The temple also has the oldest stone inscription that gives us names of 28 Saivagamas or Shaiva saints. There is also an inscription made by the Chalukyan king Vikramaditya II who was so overwhelmed by the grandeur of this temple that he returned all war loots.

How and when to go: Kanchipuram is easily accessed from both Chennai and Mahabalipuram through the different transportation available, such as buses and taxis. Kanchipuram is a city of temples with many old temples to explore, so it is advisable to keep 2-3 days for this city. The best time to visit Kanchipuram is from November to January when the weather is cooler. The temple sanctums and also some mandapas remain closed from 12-4 pm; therefore, the visits must be planned accordingly.