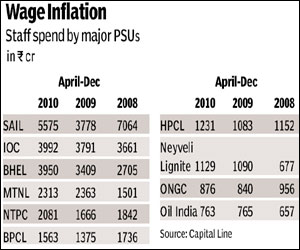 As we have seen, the staff cost to total expenditure ratio of PSUs increased during the study period. Among the 53 PSUs, a steady increase in the ratio was seen in the case of 19. Mention may be made of MTNL, BEML, NHPC, SCI and Hindustan Copper.

An interesting aspect is that nearly 17% PSUs had reported a decline in staff spend during April-Dec 10. Significant decline in staff cost was registered by GAIL, MTNL, Mysore Paper, Scooters India and PTC India.