The world’s first hybrid “aeroboat” capable of travelling on land, water, snow and sand that has been built by an Indo-Russian joint venture was unveiled in Moscow. 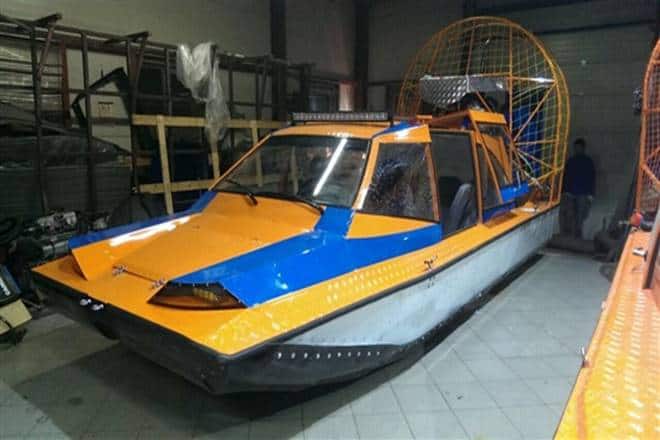 The world’s first hybrid “aeroboat” capable of travelling on land, water, snow and sand that has been built by an Indo-Russian joint venture was unveiled in Moscow on Tuesday at a start-ups event organised by Russia’s state-run Skolkovo Foundation. The aeroboat is designed to access difficult terrain, such as flooded or marshy areas where the use of regular boats is made impossible because of shallow water, patches of dry land or by marine vegetation. It has been designed by IIAAT Holding, a joint venture between the International Institute for Advanced Aerospace Technologies and Indian firm Millennium Aerodynamics. The aeroboat is on demonstration in and around a pond in the two-day Startup Village annual event in Moscow for technology entrepreneurs and investors organised by Russia’s biggest innovation fund the Skolkovo Foundation. IIAAT Holding board member Sukrit Sharan, who is in Moscow, told IANS in an e-mail interview that they have orders for more than 25 aeroboat units from private and government buyers in India of which they have already despatched five for use in disaster management. These are much faster and more robust than the comparable hovercrafts, he said. “We have already exported around five units to India, both for transportation and disaster management applications. These delivered products are poised to help save hundreds of lives in India during the monsoon season when the regions experience floods,” Sharan said.

“After our success with Indian disaster management authorities, Russia’s Ministry of Emergency Situations has shown very strong interest in these vehicles.” While hovercrafts on average move at around 45-50 km per hour on water, aeroboats are capable of going at around 150 km or more, he said. “The Aeroboat is also more robust than hovercrafts, and with estimated maintenance costs of $400-$600 per year, is cheaper to maintain and fuel,” Sharan said. He pointed out that it runs on a “hybrid” engine, meaning it can run on either petrol or electricity, enabling users to reduce carbon emissions and increase energy efficiency. ”

Additionally, we are equipping our aeroboats with IoT (Internet of Things) technology, which allows us to remotely monitor and control and diagnose the equipment, as well as troubleshoot select faults,” he said. According to the makers, with room for 10 passengers and one crew member, the 6.5-metre-long aeroboat can handle steep slopes and embankments, and does not require any marine infrastructure such as jetties, since it is amphibious.

“Hovercrafts work on static air-cushion, whereas aeroboats work on dynamic air-cushion. This feature gives aeroboats a huge advantage in terms of speed and manoeuvrability,” he said. “It’s possible to use hovercrafts, but they are very expensive to operate and also have speed limitations. Our amphibious aeroboats can provide high-speed year-round navigation, even when bodies of water are frozen like in Russia,” he added.