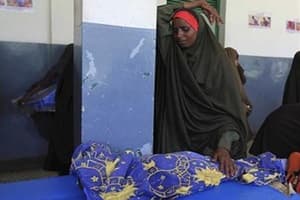 Pakistan, a nuclear power nation, is ready to spend $8.23 billion more on its defence, but does not seem to have the funds to reduce its high infant mortality rate. (Reuters)

Pakistan, a nuclear power nation, is ready to spend $8.23 billion more on its defence, but does not seem
to have the funds to reduce its high infant mortality rate.

According to a World Bank report, child mortality rates in Pakistan are nearly twice as high as India’s. The report indicates that Pakistan ranks towards the bottom among countries in the world when it comes to infant and neonatal mortality.

The report developed by the UN Inter-agency Group for Child Mortality Estimation i.e., UNICEF, WHO and World Bank, says 66 infants died for every 1000 births in 2015 in Pakistan.

This trend has been visible for the past several years with a marginal difference in percentages.

Dr. Rehmat Beg of the Government Hospital in Karachi, said, “The economic situation in our country is not good, so, it becomes very difficult for the government to provide adequate medical facilities as compared to other countries. We are backward in facilitating medical aid. The basic health care facility is quite unstable now.”

Some residents blame corruption in the government to be behind in dealing with the cause.

Zahida Begum, a resident of Karachi, said, “Who is responsible? They are all corrupt. They all run their private clinics and sell medicines. They don’t provide medicines to the poor and needy.”

The mortality rates among children are often seen as a proxy for the level of social development in a country, since they reflect the level of nutrition, parents’ education, and access to health services.

Lack of clean water and sanitation facilities in Pakistan stood as one of the biggest impediments in reducing child mortality.

In India, improving health services and better sanitation facilities have led to a significant decline in infant mortality rate.

In many states across India, the infant fertility rate has seen significant improvement because of proactive steps taken by the government.

Saleem-ur-Rahman,Director, Health, Jammu and Kashmir, said, “Be it infant mortality rate, maternal mortality ratio, birth rate or death rate in the country – all have seen an immense improvement. The reason is that the government of India is very proactive as they have launched many programmes and upgraded many others. There are many programmes child survival, save motherhood, then RCH, RCH1 and RCH2 were introduced.

Later NRHM (National Rural Health Mission) was introduced. Now, NHM is continuing. So, it’s a support and funding from the government of India which made us to upgrade the healthcare delivery system, which is pan-India. It helped us to put focus and identify the gaps. The gaps have been identified and were addressed.”

Several countries in Africa like Ethiopia, Ghana and even Afghanistan have better infant mortality rates than Pakistan.

Given the facts mentioned in the World Bank report, it appears that Islamabad has a non-serious approach to the issue of infant mortality, and needs to wake up to deal with it promptly.