Must Read
Cryptocurrency Crime 2022: How this year was ‘a fall’ for crypto crime
SBI, KFin Tech, Tata Power, JSW Energy, M&M stocks in focus
NSE F&O ban: Balrampur Chini Mills and others under ban on Thursday, December 29, 2022
Financial Resolutions for 2023 to control spending and save towards the future
Pause slide

The Islamic State (IS) jihadist group has released a video purporting to show two captured Turkish soldiers being burned alive. 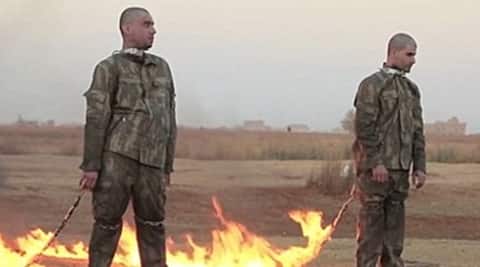 Speaking in Turkish, the killer of the two men verbally attacks Turkish President Recep Tayyip Erdogan and calls for "destruction to be sowed" in Turkey. (Videograb)

The Islamic State (IS) jihadist group has released a video purporting to show two captured Turkish soldiers being burned alive. The video, showing two uniformed men being hauled from a cage before being bound and torched, was posted on jihadist websites. The 19-minute footage was purportedly shot in the IS-declared “Aleppo Province” in northern Syria.

Speaking in Turkish, the killer of the two men verbally attacks Turkish President Recep Tayyip Erdogan and calls for “destruction to be sowed” in Turkey.

The shock images recall the killing of Maaz al-Kassasbeh, a Jordanian fighter pilot, who was captured by the jihadists when his plane went down in Syria in December 2014, and was later burned alive in a cage.

Also Read
Gruyeres and the Cheese Factory! How this Swiss village is giving picturesque lessons in sustainable living
Year-Ender | Top world events no one expected in 2022 but made headlines and changed the course of history
China’s vast countryside in rush to bolster COVID-19 defences
6.0 earthquake strikes off coast of Ecuador

The IS-linked news agency Amaq said last month that the jihadists had kidnapped two Turkish soldiers, and the Turkish army separately said it had lost contact with two of its men.

The video’s release came a day after 16 Turkish soldiers were killed by IS fighters, in Ankara’s biggest loss so far in its unprecedented incursion into Syria. They were killed in a succession of attacks around the Syrian town of Al-Bab on Wednesday that included three suicide car bombings.

Turkish troops entered Syria on August 24 in support of pro-Ankara Syrian rebels, with the aim of ousting IS jihadists as well as Kurdish militia from the border area.

At least 38 Turkish soldiers have been killed in operation, which the Turkish government has dubbed Euphrates Shield. The biggest losses have occurred at Al-Bab, an IS stronghold.

Turkey has been hit at home by the bloodiest attacks in its modern history, which it blames on jihadists and Kurdish militants.

The government is also carrying out a wide-ranging crackdown following an attempted coup in July, which it says was orchestrated by the group of an exiled cleric, Fethullah Gulen.