City authorities said workers were close to completing restoration of power, water and heat, but high consumption levels meant some blackouts had been imposed. Millions in and around Kyiv were coping with disruptions caused by waves of Russian air strikes. 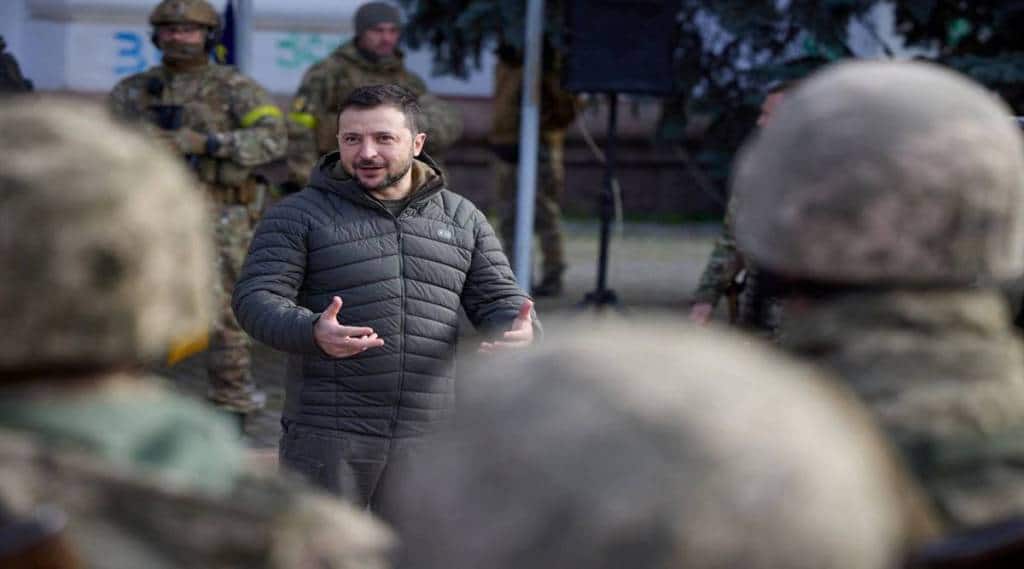 "We understand that the terrorists are planning new strikes. We know this for a fact," Zelenskiy said in his nightly video address. (Photo source: Reuters)

Ukrainian President Volodymyr Zelenskiy said on Sunday that Russia would surely launch new missile attacks on his country, and warned defence forces and citizens to be prepared to withstand a new week of strain on the power grid. Snow fell in Kyiv and temperatures hovered around freezing on Sunday with fog forecast overnight.

City authorities said workers were close to completing restoration of power, water and heat, but high consumption levels meant some blackouts had been imposed. Millions in and around Kyiv were coping with disruptions caused by waves of Russian air strikes. “We understand that the terrorists are planning new strikes. We know this for a fact,” Zelenskiy said in his nightly video address. “And as long as they have missiles, they, unfortunately, will not calm down.”

Zelenskiy said the coming week could be as difficult as the previous week, when attacks on electricity infrastructure subjected Ukrainians to the most acute power cuts since Russian troops invaded in February. “Our defence forces are getting ready. The entire country is getting ready,” he said. “We have worked out all the scenarios, including with our partners. “There was no immediate response from Moscow to Zelenskiy’s claims. Since Russia invaded Ukraine on Feb. 24, Moscow has said it does not target the civilian population. The Kremlin said on Thursday that Kyiv could “end the suffering” of its population by meeting Russia’s demands.

Also read| Lend-Lease might limit US Arms transfers to Ukraine

Russia annexed swaths of Ukraine’s east and south in September and President Vladimir Putin said Moscow’s territorial demands are non-negotiable. After the annexation Zelenskiy said he would not negotiate with Moscow and also insisted that Ukraine’s territorial integrity cannot be negotiated.Sunday was relatively calm with no devastating attacks on Kyiv or other major cities. Ukraine’s central army command said Russian forces launched four missile attacks and fired multiple times on civilian objects in the Dnipropetrovsk region.

The situation, however, remained intense along front lines in various part of Ukraine, Zelenskiy said in his nightly address.”The most difficult is in Donetsk region as has been the case in previous weeks,” he said.The General Staff of Ukraine’s Armed Forces said Russian troops had shelled a dozen villages in Donetsk, including the main targets of Bakhmut and Avdiivka.

“The consumption restriction regime is still in place due to a capacity deficit, which currently stands at around 20%,” Ukrenergo said on Telegram.Last week, Ukrenergo’s chief executive described damage on power generating facilities as “colossal”.Moscow has targeted vital infrastructure in recent weeks through waves of air strikes that have sparked widespread power outages and killed civilians.

Fresh strikes last Wednesday caused the worst damage so far in the nine-month conflict, leaving millions of people with no light, water or heat, as temperatures fell below 0 Celsius (32 Fahrenheit. Zelenskiy said utility and emergency teams were working around the clock to provide power, with the situation “under control” though most regions were subject to scheduled blackouts to help restore the grid.

In Kherson, a city in southern Ukraine abandoned by Russian troops this month, regional governor Yaroslav Yanushevych said 17% of customers now had power. Other districts would be connected in coming days.Zelenskiy has issued constant warnings to consumers to conserve power, as have utility officials. Sergey Kovalenko, chief operating officer of YASNO, which provides energy to Kyiv, said on Saturday evening the situation in the city has improved but remained “quite difficult.”

Zelenskiy criticised Kyiv’s Mayor Vitali Klitschko, saying he had not done enough to help beleaguered residents. Klitschko, a former professional boxer, hit back at Zelenskiy, saying the criticism was out of place amid Russia’s military campaign. “That is senseless,” Klitschko said

Follow us on
First published on: 28-11-2022 at 08:24:21 am
Latest News
Mission Majnu: Here’s how many crores Sidharth Malhotra, Rashmika Mandanna, and others charged for the film
Want to dress up like Vijay Deverakonda? Here’s his style guide
Yoga For Lazy People: Easy asanas to make you happy
Metrics that matter: How can startups unlock growth in 2023 amidst global headwinds
Budget 2023 Expectations: Driving beyond Bengaluru Mission – Driving Karnataka’s digital economy
FBI searched Joe Biden home, found documents marked classified
How Meghalaya is giving an economic boost to creativity
Photos
Indian Railways’ Chhatrapati Shivaji Maharaj Terminus makeover to preserve grand heritage of the iconic structure – See PHOTOS
26 mins agoJanuary 22, 2023
First look! This is how the new Parliament will look from inside – Check latest PHOTOS
23 hours agoJanuary 21, 2023
Republic Day 2023 parade rehearsals continue at full swing in Kartavya Path; See PHOTOS
2 days agoJanuary 20, 2023
Read More
×
The ‘Fraternal Meeting’ in the UAE: What it means for the Middle East?
Foreign shipping lines may stop services for cash-strapped Pakistan: Report
For this year, it would be very difficult to militarily eject Russian forces from Ukrainian territory: US general
US Secretary of State Blinken cautions China against changing status quo on Taiwan
Rishi Sunak’s defense for PM Modi grabs worldwide attention, here’s what was said over controversial BBC documentary
Hundreds South Koreans flee after fire spreads through Seoul neighbourhood
Switch to Hindi Edition