US First Lady Melania Trump: Growing ease on official role, but not politics

As President Donald Trump shows his eagerness for the coming 2020 re-election battle, the first lady’s fervour for participating in the effort is not that clear. 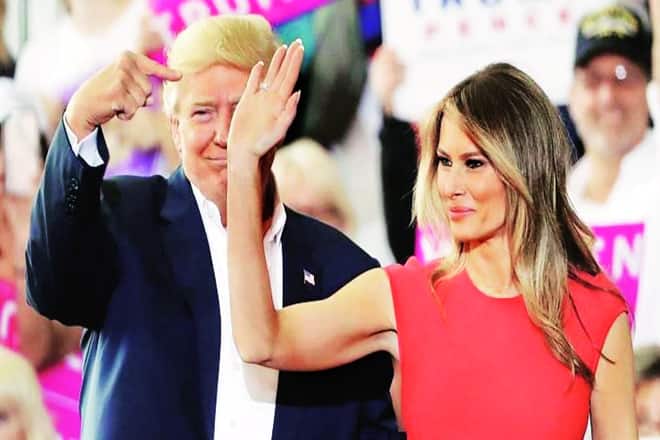 Melania Trump came armed with surefire applause lines when she stepped up to address a largely female audience that had gathered to celebrate other women. The first lady showcased the record number of women serving in Congress. She said women’s unemployment had hit its lowest level in 65 years, though it has since ticked up slightly. And she highlighted the more than two million women who have joined the workforce since November 2016, when her husband was elected president.

“This is something to celebrate,” Melania declared at Thursday’s State Department event, where many of her lines easily could have fit into a campaign stump speech. But as President Donald Trump shows his eagerness for the coming 2020 re-election battle, less clear is Melania’s fervour for joining the effort. She largely avoided the campaign trail in 2016, citing her desire to be home for the couple’s young son, Barron, now 12. And spokeswoman Stephanie Grisham predicted that once again, Melania “is going to want to be home for her son, no matter his age.”

People in Trump’s political orbit, for their part, are sceptical that one of the most private first ladies in modern history would want to take on a big public role in her husband’s bid to win another four years in office.

Even if Melania sticks largely to her official role, though, there’s plenty she can do to try to help her husband connect with women, a voting bloc with whom Trump is particularly vulnerable.

Beyond the State Department appearance, Melania showed growing ease with her role in the past week as she also made a three-state swing to promote the three pillars of her “Be Best” children’s initiative and accompanied her husband to Alabama to survey tornado damage.

In Oklahoma, she chatted with second-graders about the burdens of homework and watched older students in a science class measure the density of different coloured liquids. In Washington state, she watched as Microsoft Corp executives demonstrated features to help protect children online. In Las Vegas, she delivered a pointed jab at the news media, prodding the press to spend as much time highlighting the opioid epidemic as it devotes to “idle gossip or trivial stories.”

And in the tornado zone, the stiletto-friendly first lady wore sneakers as she played empathetic backup to her husband. She participated in a briefing, joined the president as he greeted relief workers, engaged with victims with him and on her own, and signed autographs.

Recent first ladies have all taken prominent roles in re-election campaigns. Michelle Obama, Laura Bush, Hillary Clinton and Barbara Bush all campaigned separately from their husbands at re-election time.Katherine Jellison, a history professor at Ohio University who studies first ladies, said they can help their husbands politically by reaching out to female audiences and showing up at smaller venues than where the president campaigns.

“Typically, the president and the first lady are the family superstars,” said Jellison, adding that it was hard to find a more reclusive first lady in recent history than Melania.

Still, polls broadly show Republican women are overwhelmingly likely to support him as they do the first lady. Her appeal to other female demographics remains an open question.

In a Quinnipiac University poll conducted in November 2018, about two-thirds of Republican registered voters, or 65%, said they had a favourable opinion of Melania, while just 3% said they viewed her unfavourably.

The same survey showed that 63% of registered voters said they had a favourable opinion of Michelle Obama, and 24% said they had an unfavourable one. But that may at least be partially due to the fact that Melania has kept a much lower profile than her predecessor. Melania limited her role in the 2016 campaign to just a handful of appearances and interviews.

Most memorable moment came during the Republican National Convention in Cleveland, when her high-profile speech was quickly overshadowed by accusations that she had stolen passages from a speech given by Michelle Obama. A speechwriter later took responsibility and apologised.With her husband out campaigning, Melania wanted their son, who was 9 when his dad became a candidate, to have one parent at home at their Trump Tower penthouse in New York. Barron turns 13 later this month, and he will be 14 by the time the re-election effort is in full swing.